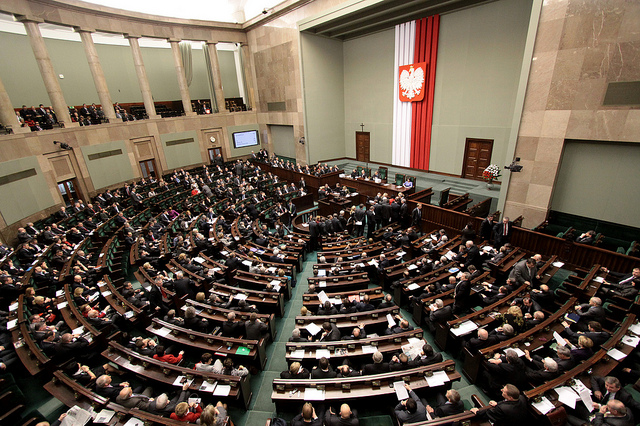 The Sejm - lower house of the Polish parliaiment - where the rapper will meet the 'old farts.' [PolishForeignMinistry/Flickr]

Covered in tattoos and known for his foul-mouthed lyrics, Polish rapper Liroy would appear an unlikely ally for the deeply conservative and religious Jaroslaw Kaczynski, who has just scored a stunning election victory.

And yet Kaczynski may seek alliances with newly-elected anti-establishment lawmakers such as Liroy, even though on Sunday his nationalist Law and Justice (PiS) became the first party to win an outright parliamentary majority in Poland since the fall of communism over a quarter of a century ago.

Kaczynski, a former prime minister, needs no coalition partner for PiS to govern. But if he is to fulfil his long-standing ambition to reshape Poland, borrowing ideas on strengthening the hand of the state from Hungarian Prime Minister Viktor Orban, he must change the constitution.

To achieve this, Kaczynski – whose identical twin Lech was president until his death in an air crash five years ago – would need to muster a two-thirds majority in the parliament.

That means winning over members of smaller parties including Liroy, the hip hop artist formerly known as Piotr Marzec, and fellow lawmakers from the anti-establishment Kukiz’15 group which came third in Sunday’s (25 October) election.

This may not be easy for 66-year-old Kaczynski. Liroy, a self-confessed dope smoker who wants to legalise it, dismisses the Polish political class as “old farts”.

Kukiz’15 swept into Poland’s politics this year on a populist wave which parties across Europe such as Italy’s 5-Star Movement, Germany’s AfD and Britain’s UKIP have also ridden.

A diverse coalition of ultra-nationalists, eurosceptics, libertarians and proponents of electoral reform, Kukiz’15 is led by another musician, 52-year-old rock singer Pawel Kukiz who used to front a band called “The Breasts”.

His combination of conservative and anti-establishment rhetoric is unique in Polish politics. He believes his artistic career must take a back seat while he pushes for electoral reform to make the country a fairer place.

“I want to sing songs about flowers and butterflies,” Kukiz said after he won a shock 21 percent of votes in a presidential election in May. “But while the political system remains unchanged, I can’t sing songs about love because I live in a matrix, in a state which is a colony of banks and corporations.”

Despite the obvious differences, the fashionably stubbly Kukiz and the well-groomed Kaczynski see eye-to-eye on a wide range of issues.

Both dislike foreign conglomerates and the banks – the singer likens the profession to organised criminals, describing them as “banksters” – and they want to see a larger share of the media in Polish hands. On a personal level both are pious Roman Catholics, oppose abortion and believe the church plays a positive role in public life.

Crucially, both have spoken in favour of expanding presidential powers, reforms Kukiz has signalled he would be ready to back as long as they strengthen direct democracy. All this would require the changes to the 1997 constitution.

PiS, which won 235 seats in the 460-member lower house (Sejm) last weekend, aims to increase state control over the Polish economy, the biggest in central and eastern Europe. It has promised to make the largely foreign-owned banks and supermarket chains pay new taxes to fund more social spending.

This would imitate steps taken in Hungary by Orban, whose drive to pack the central bank, media, judiciary and other state bodies with loyalists has drawn fire from the European Union establishment.

“Kaczynski’s immediate goal will be to find enough lawmakers in the parliament to secure a majority capable of amending the constitution,” said Aleksander Smolar, a liberal political analyst at the Stefan Batory Foundation.

“The changes will probably be in the direction of Viktor Orban’s Hungary, where the system of institutional checks on political power has been weakened,” he said.

PiS politicians have repeatedly praised Orban for decisive economic and social policymaking. “There will be a day when we’ll have a Budapest in Warsaw,” Kaczynski promised supporters after losing the last parliamentary election in 2011.

For his part, Kukiz promised when running for president to shift power from political parties and towards voters. He aims to achieve this by replacing the current system under which Poles choose candidates from lists presented by the parties.

Instead he wants purely geographical constituencies where local people would vote for a single member of parliament – an idea Kaczynski opposes.

Radoslaw Markowski, a political scientist at the Polish Academy of Sciences, said Kukiz attracted an eclectic support base for the elections. “It was the young, who have reasons to be outraged, anarchists … true nationalists – a mix,” he said.

Backed by this mix, Kukiz’15 won 42 seats in the Sejm, well over half the extra votes Kaczynski would need to reach the two-thirds majority of 307.

But any relationship between Kukiz’15 and PiS lawmakers could still be fraught with tension.

Liroy, who once dabbled in pornography production, is also a strong advocate of legalising cannabis. In an interview in 2012, the rapper said he had been smoking it for over two decades.

The 44-year-old father of four, who has legally changed his name to Piotr Liroy-Marzec, remains a cult figure among many younger Poles. Now he wants to champion their cause after eight years of governments led by the pro-market Civic Platform party.

“It is a tragedy, the situation in the country and how young people are treated,” he told private broadcaster TVN24. “They are promised higher wages and all the rest, but they are not promised a future.”

Liroy is open in his contempt of the political establishment. “These old farts do not really understand young people and this is their problem,” he said.

Kukiz’s parliamentary group will also include Robert Winnicki, chairman of the far-right National Movement whose views would also cause problems for Kaczynski.

The National Movement backs a more restrictive immigration policy, reneging on the EU’s Lisbon Treaty, boosting links with countries such as China and Belarus and “militarising the nation”.

Kaczynski has in the past distanced himself from the movement, which critics accuse of anti-Semitism and racism – charges it denies. In its election campaign, PiS attracted many centrist voters who would probably find any deal with Winnicki unpalatable.

The prospect of Kaczynski finding common ground with Kukiz’s motley crew is also worrying financial markets, adding to their anxiety about some PiS policies such as the proposed tax on bank assets and its expensive welfare promises.

“Any eventual (PiS) partnership with Kukiz’15 would increase the likelihood of erratic policymaking,” Marco Zaninelli, an analyst at Moody’s credit rating agency, wrote in a note.

Should Kaczynski’s conservatives make up the numbers to change the constitution, the consequences could be even more far-reaching. “(Kaczynski’s goal) is not about eradicating democracy, but about significantly changing its character in a non-liberal direction,” said Smolar.