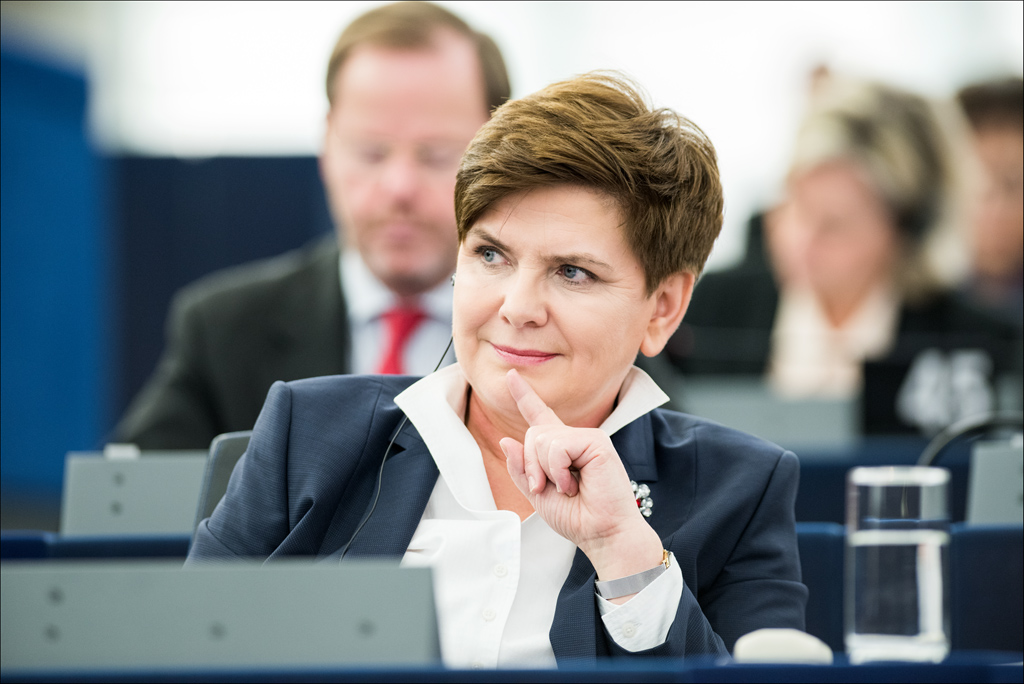 Poland’s prime minister told MEPs yesterday (19 January) that her government had not breached European or Polish laws, after the EU began an investigation into charges that Warsaw was undermining democratic principles.

After bitter exchanges between Polish and EU officials, the EU’s executive asked Warsaw to explain laws that have all but paralysed the work of the top constitutional court and put public media under direct government control.

Both Warsaw and Brussels have since sought to tone down the rhetoric. On Tuesday, Polish Prime Minister Beata Szyd?o said during a European Parliament debate that Poles were firmly part of Europe.

“There have been no violations of the constitution in Poland recently,” Szyd?o said. “The Constitutional Tribunal is doing fine in Poland these days. It works. Nothing bad is going on.

“We are part of a united Europe, this is a major value for us. We are Europeans and we are proud of it.”

Critics of her government, which came to power last year advocating a bigger state role in the economy, conservative values and Euroscepticism, accuse Szyd?o of a power grab. Warsaw says it has a strong political mandate for the changes.

Guy Verhofstadt, the head of the Liberals and Democrats group in the European Parliament, challenged that during the debate.

“What a democrat never does is to use or abuse this huge (parliamentary) majority to dismantle the system of checks and balances in the country … that makes it impossible to enact laws when they are in contradiction to the Polish constitution,” Verhofstadt said.

The European Commission’s First Vice-President, Frans Timmermans, said the investigation would focus on the changes to the constitutional tribunal, a body whose mandate is to assess whether laws comply with Poland’s constitution.

“We have never sought to dominate the tribunal … ” Szyd?o said. “The dispute around it is a political, not a legal one. It’s a political dispute and an internal Polish dispute. Poland should solve it on its own.”

She also said her government would not change course and expressed dismay that Poland was the first country to be investigated under the procedure for monitoring the rule of law, which was established in 2014 over similar concerns the EU had about Hungary.

“Today I can have a sense of injustice that it is Poland that is subjected to this experiment,” she said.

The Commission’s objections focus on the failure of Poland’s president, elected with the backing of the ruling Law and Justice party, to swear in three judges of the tribunal who had been chosen by the previous parliament.

Further concerns relate to increasing the number of judges who have to try cases, imposing an obligation to hear cases in the order they are received, which could effectively paralyse the court.

“Given the central position of the Constitutional Tribunal within the Polish judicial system, we risk seeing the emergence of a systemic threat to the rule of law,” Timmermans said. “When national rule of law safeguards seem to come under threat, the EU needs to act.”

The Commission inquiry might lead to the suspension of Poland’s voting rights in the EU bloc if the Commission decides that Warsaw has not observed the rule of law.

Guy Verhofstadt, leader of the liberal ALDE Group, told the Polish Prime Minister, that what alarms most members of the European Parliament, is that the Polish government uses a parliamentary majority to dismantle a countries system of checks and balances.
"The increased quorum, together with the two-third majority imposed by your government and the enforced chronological order of cases are clearly undermining the Court. This combination has led to its paralysis".
"These measures represent a drift towards authoritarianism, towards Putin's Russia. Mr Kaczy?ski [Jaros?aw Kaczy?ski is the leader of the ruling party Law and Justice] is facilitating Putin's efforts to disrupt European unity".
"I trust that the Polish people will not let you turn the clock back. Knowing the Polish people, the people who gave rise to Solidarno??, who resisted repressions and who fought for freedom, for democracy, for the rule of law, I am convinced they will never accept to give up democracy again".
"Listen to your people, listen to the Polish citizens".

Such examples include the handling of the Roma issue by the former French President Nicolas Sarkozy, attempts to impose one-party rule in Hungary, and an attempted crackdown on the judiciary in Romania.

If article 7 is activated, this would mean that the country in breach would temporarily lose its EU membership rights. But before such a decision can be made, the Council shall hear the member state in question and may address recommendations.

But as Article 7 is described as a ‘nuclear bomb’ which may never been used, the previous EU Commission, under José Manuel Barroso, introduced a "pre-Article 7 procedure", which follows three stages. Those are:

Before the Lisbon Treaty entered into force, the EU imposed sanctions only once against a member state. In 2000, 14 countries of the then 15-member EU reacted to the entrance of Jörg Haider's far-right Austrian Freedom Party into the Austrian government by freezing bilateral relations with the country.