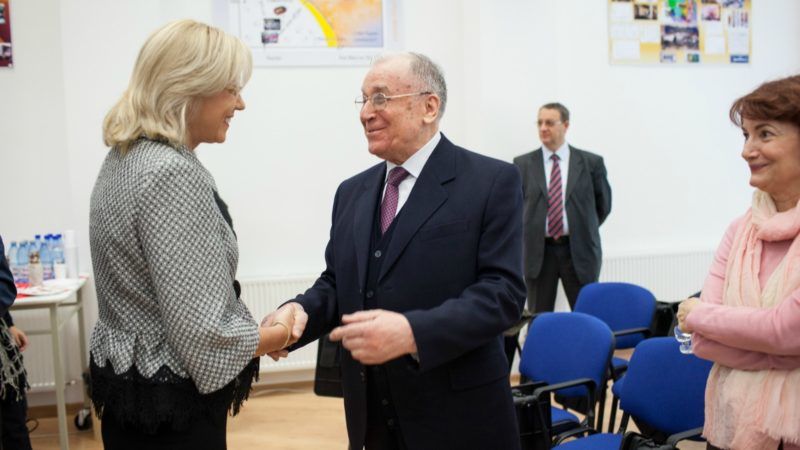 Ion Iliescu, the former president of Romania, on the right, and Corina Creţu. Creţu was Iliescu's spokesperson from 2000 to 2004, during his second presidential mandate. [European Commission]

Ion Iliescu and 13 other officials have been ordered to stand trial on charges of crimes against humanity in connection with the crackdown on a Bucharest protest in 1990, the prosecutor’s office said yesterday (13 June).

Four people were killed after Iliescu called in tens of thousands of club-wielding miners to help police put down the demonstration, just months after the execution of Communist dictator Nicolae Ceaușescu in December 1989. The events are known in Romania as “Mineriade.”

“On June 11 and 12, 1990, the authorities decided to launch a violent attack on peacefully demonstrating protesters” opposed to the new regime which Iliescu headed after his election the month before, the prosecutor’s office said.

Besides the four dead, a further 1,380 injured and 1,250 arrested, according to the charge sheet.

After quashing the protest, Iliescu thanked the miners for their “high sense of civic duty”.

The former president, now 87, would go to serve two further terms before leaving office in 2004.

First accused in 2005 before charges of murder and attempted murder were dropped on technicalities two years later, he denies being responsible for the violence which brought widespread international condemnation.

The legal wheels began moving again after the European Court of Human Rights criticised Bucharest in 2014 for failing to fully examine the crimes committed in the aftermath of the revolution.

#Romania has to investigate again the mineriade in the early 1990s, says #ECHR http://t.co/dnPE7d1jeE a welcomed ruling

The others facing trial include former prime minister Petre Roman; Virgil Magureanu, the intelligence chief at the time; two leaders of the powerful miners’ union; and a former deputy prosecutor.