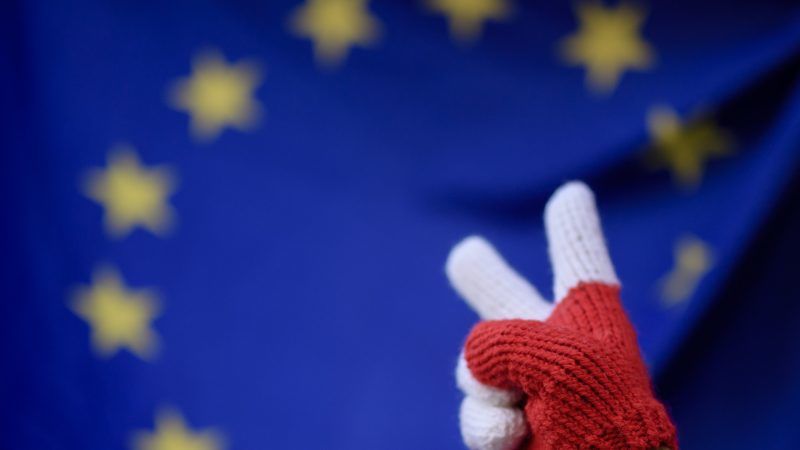 A recent survey shows that despite the frictions between the Polish government and the EU over the rule of law, a vast majority of Poles remains pro-European. [EPA/CLEMENS BILAN]

Polish authorities claim that the launch of Article 7 against their country is unjustifiable. Citizens are divided on the issue and nearly half of them believe the Commission is just acting because it does not like the current authorities in Warsaw. EURACTIV Poland reports.

According to a January survey by the Polish Centre for Public Opinion Research (CBOS), 43% of Poles agree the ‘nuclear option’ against Poland is unjustified, while 38% think the opposite. Almost half (46%) think the Commission’s decision was based on a dislike of the current government.

Since the moment the Article 7 procedure on the state of the rule of law in Poland was initiated, Polish government officials were convinced that it was groundless.

President Andrzej Duda said on Monday (29 January) that he “totally disagrees” with the Commission. “I think this is a very unfair treatment that we are facing,” he said in an interview with Polish television channel TVP.

The Polish authorities, Duda explained, had only introduced changes to the legal system that are already in force in other EU countries, but only Poland is accused of violating democracy.

“Let’s take into consideration the real image of our country: we have freedom of association, everyone can demonstrate, there is no problem when it comes to freedom of speech,” said Duda.

Prime Minister Mateusz Morawiecki, who only took office in December, also insisted that the launch of Article 7 was unfounded and argued that the country has the right to implement reforms.

The CBOS survey also shows that for 45% of respondents, this form of pressure on the Polish authorities is unacceptable, while 34% consider it acceptable and 21% said they have no opinion on the matter.

Researchers point out that Poles are also divided over whether the country should heed the Commission’s recommendations and withdraw some of the changes in the judicial system. 44% of respondents believe Poland should meet the Commission’s expectations while 41% think the opposite.

Poles do not fear sanctions, count on Hungary

According to the survey, Poles are not afraid that the current situation will result in sanctions. Although more than a half of the respondents (51%) believe that sanctions could be an option,  the majority are convinced that the Council will fail to secure the unanimity necessary to approve sanctions.

Here, 28% of respondents believe that at least one country would take the Polish side and 35% think it would be more than one – expecting solidarity from post-communist countries like Hungary (77%), the Czech Republic (22%), Slovakia (16%), Bulgaria (14%) and Lithuania (8%), with 7% betting on Germany as well.

At the same time, as many as 87% of respondents (up on 85% in the previous survey), were still in favour of Poland’s presence in the EU and only 10% opposed it.

The survey was carried out on January 9-17 on a sample of 951 adult Poles.