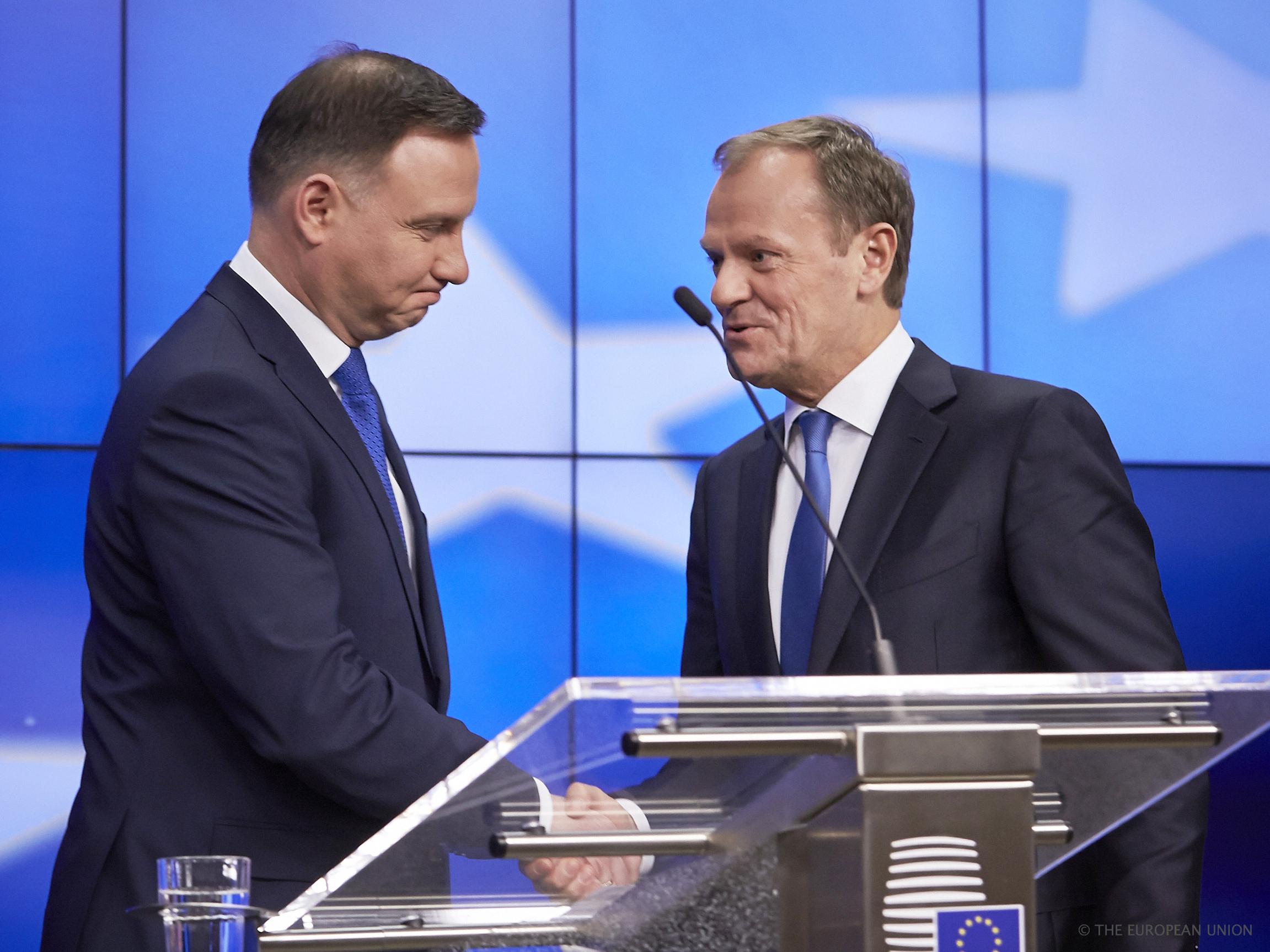 Speaking alongside Tusk following a meeting in Brussels, Duda said that “what is needed is a calm dialogue with calmed-down emotions”.

His host Tusk, who served as Poland’s premier between 2007 and 2014, repeatedly stressed the need for “restraint and a sense of reasonable language”. Both leaders spoke in Polish.

Last week, the European Commission invoked a “Rule of Law” mechanism for the first time to launch an initial investigation of changes to the constitutional court introduced by Poland’s new right-wing government, to determine if they breached EU democracy norms, and merit punitive measures.

The Commission will also look into measures to increase government control over state media adopted by the conservative, eurosceptic Law and Justice party (PiS) which won power in October’s general elections.

‘Not enthusiastic’ over the Commission move

“What the European Commission is going to do, I’m not very enthusiastic about it and I’m not the initiator of this decision. But I think this is an opportunity to tone down the negative emotions that have grown up around Poland,” Tusk said.

Tusk added that he could “imagine that this could be achieved by other methods without triggering this procedure”.

The Council President said it was “normal” that the Polish head of state came to Brussels to explain the designs of the country’s new government.

“What is not normal is the emphasis on (the) bad narrative about Poland, and I believe everybody, with no exceptions, in Brussels, in Warsaw, in all European capitals, if they have the good of the EU at heart, should exercise restraint and refrain from hysterical behaviour.”

Tusk said he had stated the same when Victor Orbán came to the power in Hungary, in 2010.

“If somebody uses too strong words or takes actions that do not entirely match the Western European community of values, he has to be ready for a strong reaction. However this reaction cannot be hysterical,” he said.

Asked if he thought the executive had made a mistake by opening the probe against Poland under the Rule of Law mechanism, Tusk said Poland did not have enemies, at the EU or in Brussels. He said that by using the word “hysterical”, he did not qualify the actions of certain institutions, but of some politicians.

“The positive developments in Warsaw depend on the adequacy of Europe’s reaction,” he said.

Duda was asked if he thought Tusk was not representing Polish interests in Poland properly. The Polish President started by saying that his countrymen were proud that a Pole had assumed such a high post in the EU.

“He has a Central European perspective on the United Europe, and that is slightly different from the perspective of Western Europe. For us, for Poles, this is very positive,” he remarked.

Indeed, as Council President, Tusk has time and again expressed positions close to the heart of Central Europeans, the last example being the December summit, when he endorsed the arguments of the Visegrad countries against the Germany-favoured Nord Stream 2 project.

Other examples were offered by the summit debates over the refugee crisis.

>>Read: Tusk and Orbán on collision course with Merkel over refugee crisis

Duda stated that together with Tusk, that they both appeal for a calming of the debate on Poland, and for basing it on real facts.

As analyst Piotr Maciej Kaczy?ski recently told EURACTIV, it is still unclear if Warsaw would be supportive of Tusk staying for another two and a half year term, after his present mandate expires in June next year.

>Read: Analyst: Commission is wrong to hit at Poland over the rule of law

Since 2009 when the Lisbon Treaty entered into force, the European Commission has been confronted on several occasions with crisis events in some member states, which revealed specific rule of law problems.

Such examples included the handling of the Roma issue by the former French President Nicolas Sarkozy, attempts to impose one-party rule in Hungary, and an attempted crackdown on the judiciary in Romania.

But as the Article 7 is described as a ‘nuclear bomb’ which may never been used, the previous EU Commission under José Manuel Barroso introduced a "pre-Article 7 procedure", which follows three stages. Those are:

Before the Lisbon Treaty entered into force, the EU had imposed sanctions only once against a member state. In 2000, 14 countries of the then 15-member EU reacted to the entrance of Jörg Haider's far-right Austrian Freedom Party into the Austrian government by freezing bilateral relations with the country.