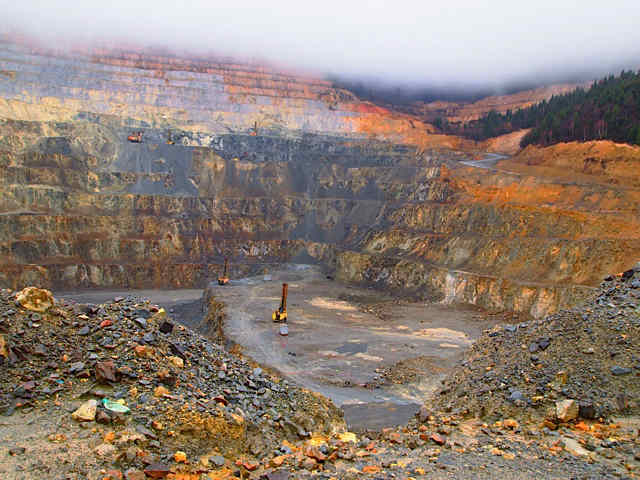 Romanians decided two years ago not to host Europe’s largest gold mine. Now the Canadian mining company behind the project is seeking massive compensation from Bucharest, in a case that foreshadows what TTIP could bring, writes Claudia Ciobanu.

Claudia Ciobanu is a Romanian freelance reporter based in Warsaw.

The biggest citizen mobilisation in Romania since the anti-communist battles of the early 1990s opposed in 2013 Gabriel Resources’ plan to build a cyanide-based gold and silver mine in the Romanian Apuseni Mountains at Rosia Montana. Following massive street protests, the Romanian parliament decided not to pass legislation that would have allowed the company to go ahead with the mine.

The exploration would have involved digging up Rosia Montana and two nearby villages, destroying four mountains and placing a giant cyanide pool in the area.

This week, Gabriel Resources officially announced that it filed a request for arbitration against Romania before the World Bank’s investment dispute settlement centre. According to the company, “through its actions and inactions, Romania has blocked and prevented implementation of the project, effectively depriving Gabriel entirely of the value of its investments”.

Gabriel is able to bring Romania in front of an arbitration tribunal because of bilateral trade treaties Romania signed with Canada (where the company is listed on the stock exchange) and the UK (it is not yet clear whether the company is able to use the treaty with the UK because it has a subsidiary in infamous tax haven Jersey or for another reason).

According to information publicised by Gabriel Resources in Romania, the company has up until now invested half a billion US dollars in the country. Yet in an interview given in 2013, Jonathan Henry, the president and CEO of Gabriel said the company would seek as much as $4 billion in damages from Romania if the project does not go ahead.

Today, Henry does not give out any information about the total amount sought by the company. But if his old threat is true, this would be one of the biggest amounts ever claimed by a corporation from a state in arbitration. As of 2012, the biggest amount awarded under the World Bank’s dispute settlement instrument was the $1.77 billion that Ecuador was asked to pay to Occidental Petroleum Corporation.

Romania’s total healthcare budget is usually around $1.5 billion annually, meaning that losing the arbitration case could potentially cost Romania the equivalent of three years of state health services. An enormous price to pay for the sake of Gabriel’s shareholders, the beneficiaries of an eventual arbitration victory by Gabriel. Almost half of the cases settled via the World Bank’s instrument are won by corporations.

That Gabriel is now asking for damages that Romanian citizens may end up paying is a painful absurdity.

For more than ten years since this project has been on the table, it has been promoted by all mainstream media whose advertising budgets were boosted by Gabriel Resources and by politicians from all political parties (including centre-right former president Traian Basescu and centre-left current prime minister Victor Ponta) which raised suspicions of corruption.

When massive protests against the gold mine erupted in 2013, parliamentarians were debating a law which would have granted the corporation extraordinary powers: it would have mandated authorities to give the company all necessary permits for construction and exploration by set terms (15 days, 30 days, etc) regardless of national legislation, court rulings or public participation requirements.  Despite intending to pass this law initially, parliamentarians stepped back in the face of public anger. Most likely, it is the rejection of this law which Gabriel considers as inaction by the Romanian state leading to the loss of its investments.

Gabriel is therefore effectively trying to make Romanians pay for having pushed their legislators to do the right thing.

With the vast expansion of the use of investor-state dispute settlement brought about by the TTIP (the Transatlantic Trade and Investment Partnership), Romanians and other Europeans can only expect more of such cases. According to some analyses, the TTIP and a few other trade agreements negotiated at the moment would expand the coverage of investor-state arbitration from around 20% to around 80% of investment flows to and from the US and the EU. Additionally, current experience shows that developing countries are much more often targets of corporations than rich ones.

Romanian NGOs are afraid that during the arbitration the Romanian government might try to help the corporation (because of alleged corruption). This reality puts Romanian authorities very far from where they should be if they were really serving the interests of their citizens. If the latter were the case, the Romanian government should be sceptical of any trade deal that includes an investor state dispute settlement mechanism and especially so of the TTIP which would make the country vulnerable to a much bigger number of damage claims.

Unfortunately, as the Greek crisis is proving, in today’s Europe the will of citizens can be easily crushed by technocratic opaque mechanisms that serve the interests of big finance and big business without governments being willing or able to intervene. TTIP looks set to bring more of the same. The recent case opened by Gabriel Resources against Romania serves as an omen of what Europe’s future may look like if citizen power is not restored.