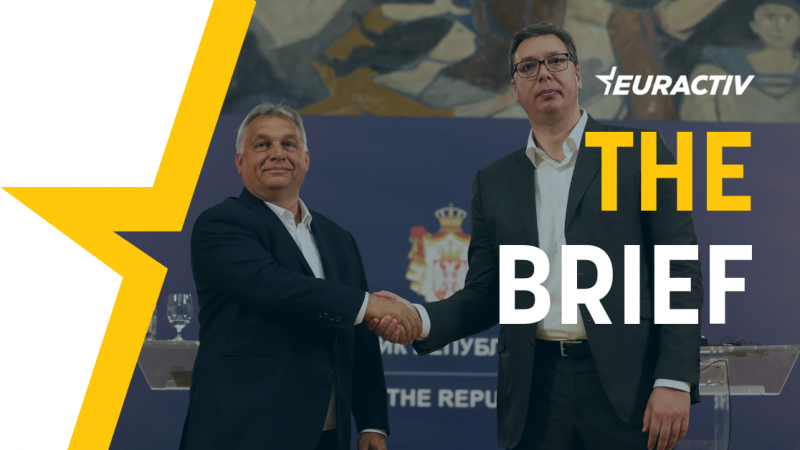 Central European leaders signed a joint declaration today saying immigration should not be the answer to the EU’s demographic challenges and calling on the bloc to keep family policy under national jurisdiction. In other words, they want to have it their way.

“Each member state should shape its own family policy in accordance with its own constitution, traditions and customs. Family policy is and should remain a national competence,” said the statement, signed by the prime ministers of Hungary, Poland, the Czech Republic, Slovenia and the President of Serbia, Aleksandar Vučić.

Vučić’s Serbia has also recently been in tune with Austrian Prime Minister Sebastian Kurz. And as an analyst put it, this meeting of minds is certainly not about democracy, common values and the rule of law.

Serbia wants to be a member of the EU but its leadership is not helping the country achieve this goal.

However, if Serbia wants to join an alternative illiberal union with Hungary, Poland and some others, then it is on the right track.

Recently the prime ministers of Serbia and Hungary, Ana Brnabić and Viktor Orbán, signed an Agreement on Cordial Relations and Strategic Partnership in Budapest. Orbán has been pushing hard for Serbia’s EU membership although Belgrade’s accession talks are currently deadlocked due to the lack of reforms, especially regarding the rule of law.

It is clear what Orbán’s interests are in building such an alliance. By advocating Serbia’s membership of the EU, the Hungarian PM is strengthening his country’s influence in Serbia and the region, and also improving Hungary’s position in Brussels: Instead of looking isolated, he makes a show of having followers.

It is less clear what Serbia’s interests might be. Siding with Hungary, the EU’s black sheep, hardly helps Serbia’s EU membership cause.

But perhaps we are looking at this the wrong way.

Serbs may be interested in joining the EU but Vučić is more comfortable outside the Union. He doesn’t want to reform Serbia the way the other countries that joined the EU have done. But he doesn’t want to feel isolated either. He is at home in an illiberal alliances.

And perhaps the entire scheme is part of a bigger plan.

The ‘Putinisation of Europe’ was a term popularised by Martin Schulz, when he was the president of the European Parliament. It referred to a tendency to move away from liberal democracy in certain Eastern European countries in imitation of Vladimir Putin’s regime in Russia.

The author of this Brief hopes that he is wrong, and that no master plan for Putinisation exists.

But if it does exist, what could the EU do? The enlargement commissioner, Olivér Várhelyi,  is an Orbán appointee (accepted with surprising speed by Commission chief Ursula von der Leyen). And, according to insiders, Varhelyi has been playing an unfair game by praising Vučić in contrast to the rest of von der Leyen’s college of Commissioners.

Orbán and Vučić like to humiliate the EU and they will continue to do so. Because they can.

The European Commission presented on Thursday a proposal which would require a single charger — an input of USB Type C and an output of USB PD — across the board for smartphones, tablets, and other devices in two years. The Commission calls the proposal “an important step to increase convenience and reduce waste,” but some developers and stakeholders (think: Apple) feel it would stifle innovation.

And at the tenth annual France Digital Day, the French tech sector announced its ambitious plans to stay atop the tech industry for years to come. Plans include creating more large venture capital funds and attracting talent.

Tech companies continue to wage a war against Google and Apple, which are being questioned regarding the monopolies they hold over their respective app stores. But a new South Korean law, which requires app stores to allow alternative means of payment for in-app purchases, shows that it may be possible to “beat Goliath.”

Agriculture Commissioner Janusz Wojciechowski has promised a “comprehensive impact assessment” of the Commission’s Farm to Fork strategy (F2F), of which he partially announced via Twitter on Thursday. National F2F plans must be submitted to the Commission for approval by the end of the year.

But for what it’s worth, other world leaders aren’t as optimistic about the F2F plan as Wojciechowski is. At last week’s G20 agricultural ministerial meeting in Florence, US agriculture secretary Tom Vilsack announced the preparation of “a new coalition to help elevate sustainable productivity growth as a strategic action priority,” which is expected to counter the F2F.

Speaking of farms (and forks): beef is consistently brought up as a “climate change villain” during talks on emissions reduction. So does livestock have to go, or can we implement new tactics to produce beef sustainably?

Another big climate question: how can the EU decarbonise the maritime sector? Maritime transport is responsible for about 2.2% of global greenhouse gas emissions, so lawmakers have proposed strategies to increase the use of renewable energy and overall efficiency.

It’s been 21 years since the adoption of UN Resolution 1325, but key female changemakers say we still have years of work (namely, 325) to be done before achieving equal representation. One leader emphasised that it is “incredibly important to invest in human beings.”

61 organisations are asking for more transparency and tighter deadlines within the European Commission’s annual report assessing the rule of law situation in the EU Member States. Stakeholders say these parameters will make the report morre “credible and effective.”