Czech Republic Senate President Milos Vystrcil (L) waves to journalists upon arrival at Taiwan Taoyuan International Airport in Taoyuan, Taiwan, 30 August 2020. Vystrcil is in Taiwan for a six-day visit, to strengthening economic and cultural ties between the two countries. [Ritchie B. Tongo/EPA/EFE]

Czech Senate speaker Milos Vystrcil will “pay a heavy price” for making an official trip to Taiwan, the Chinese government’s top diplomat said on Monday (31 August), in a warning brushed off by Vystrcil who said he was not seeking political confrontation.

Vystrcil arrived in Taipei on Sunday on a visit to promote business links with Taiwan, saying the Czech Republic would not bow to Beijing’s objections. China considers Taiwan a breakaway province ineligible for state-to-state relations.

Speaking while in Germany, Chinese State Councillor Wang Yi said there would be retribution.

“The Chinese government and Chinese people won’t take a laissez-faire attitude or sit idly by, and will make him pay a heavy price for his short-sighted behaviour and political opportunism,” China’s Foreign Ministry cited Wang as saying.

Wang said the Chinese government and people will not tolerate such “open provocation” by Vystrcil and the anti-China forces behind him, though gave no details of how exactly Beijing would react.

Vystrcil said in a statement that Wang’s comments were an interference in the Czech Republic’s internal affairs.

“We are a free country seeking to have good relationships with all countries and I believe this will be the case in the future irrespective of the statement of the Minister. And let me repeat again – this visit is by no means meant to politically confront anyone,” he said.

Taiwan Economics Minister Wang Mei-hua declined direct comment on China’s attack on Vystrcil, but said the two had much in common.

“The Czech Republic and Taiwan are free and democratic countries which put great store on human rights. We have the same values as the Czechs,” she told reporters, speaking before a joint business forum with Vystrcil.

He is due to meet Taiwan President Tsai Ing-wen later and will address Taiwan’s parliament before leaving on Friday.

Czech President Miloš Zeman has sought closer business and political ties with China since taking office in 2013, but his efforts have been hit by failed investment plans and Czech wavering about allowing China’s Huawei Technologies to play a role in developing next-generation telecoms networks. 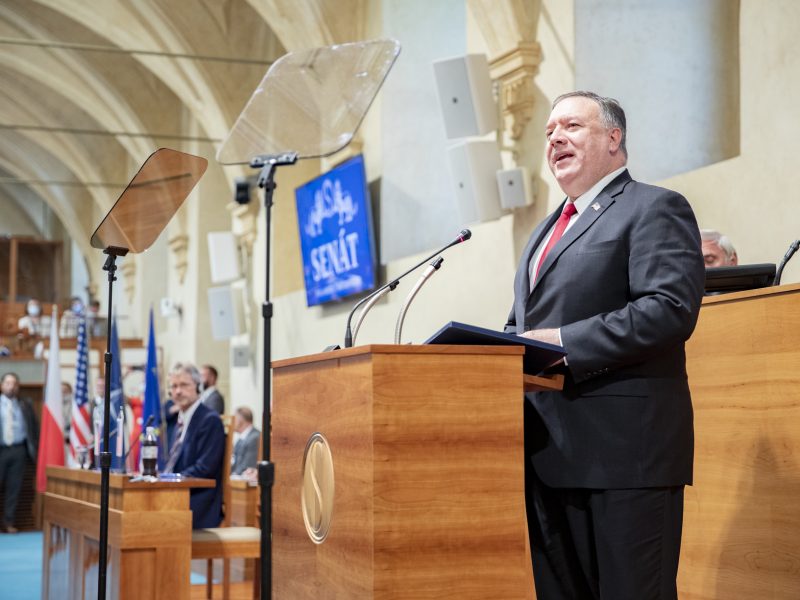 China’s global economic power makes the communist country in some ways a more difficult foe to counter than the Soviet Union during the Cold War, US Secretary of State Mike Pompeo said on Wednesday (12 August).