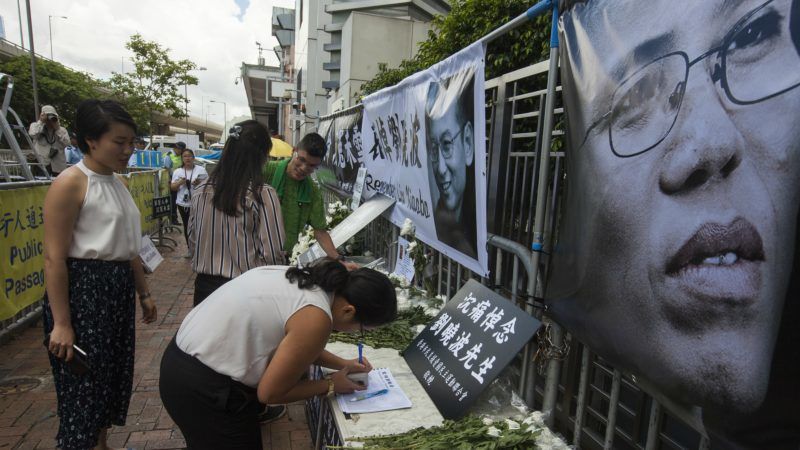 Members of the public sign a book of condolences and lay flowers as they pay respects to the late Chinese dissident and Nobel peace laureate Liu Xiaobo at a makeshift shrine. Hong Kong, 14 July. [Alex Hofford/EPA]

Liu, a government critic and thorn in the side of the government for decades, died in custody, having been sentenced to 11 years in prison in 2009 for “subversion”.

In a joint statement, the chair of European Union summits Donald Tusk and head of the European Commission Jean-Claude Juncker expressed sadness for the death of Xiaobo.

.@eucopresident and I are deeply saddened by the death of #LiuXiaobo, a great #humanRights defender: https://t.co/G73Y3A6r3L

They stressed that they had on several occasions urged Beijing to allow him to receive medical treatment in Germany.

“We reiterate the European Union’s call for all prisoners of conscience in China to be released,” they said, calling on the Chinese authorities to allow Xiaobo’s family to bury him according to their wishes.

“We call on the authorities to remove all restrictions on the movement and communications of his family members,” they added.

The world reacted with praise and sadness.

“We find it deeply disturbing that Liu Xiaobo was not transferred to a facility where he could receive adequate medical treatment before he became terminally ill,” Berit Reiss-Andersen, who chairs the Norwegian Nobel Committee, said in a statement.

“The Chinese government bears a heavy responsibility for his premature death.”

He instead used the occasion to praise China’s leader Xi Jinping as a friend and patriot.

“The president’s heartfelt condolences go out to Liu Xiaobo’s wife, Liu Xia, and his family and friends. A poet, scholar, and courageous advocate, Liu Xiaobo dedicated his life to the pursuit of democracy and liberty.”

Earlier, Trump’s Secretary of State Rex Tillerson had praised Liu and called for his widow, the poet Liu Xia, to be released from house arrest.

And the US Ambassador to the United Nations, Nikki Haley, called Liu “a true champion for freedom and an inspiration to those longing for democracy around the world”.

“His family has my deep sympathies.”

Germany had said it was prepared to welcome Liu for medical treatment after he was transferred from prison to hospital.

“The human rights movement in China and across the world has lost a principled champion who devoted his life to defending and promoting human rights, peacefully and consistently, and who was jailed for standing up for his beliefs,” the UN High Commissioner for Human Rights, Zeid Ra’ad Al Hussein, said in a statement.

“Liu Xiaobo was the true embodiment of the democratic, non-violent ideals he so ardently advocated.”

The French leader later remembered Liu in a tweet, praising him as “a freedom fighter” and saying his thoughts were with his family.

“Liu Xiaobo should have been allowed to choose his own medical treatment overseas, which the Chinese authorities repeatedly denied him,” Johnson said in a statement.

Chen Guangcheng, one of China’s best-known activists who fled to the United States in 2012, said Liu was “deliberately killed” by the country’s rulers and urged the international community to maintain pressure on Beijing.

“We need to see his death as not a natural, normal death,” Chen told AFP in a telephone interview from Washington.

Chen said China had refused to allow Liu to travel abroad for treatment because they “were likely to discover what was really wrong with him and would probably reveal that they had been harming him with medication or some such things.”

“As a vocal outspoken Nobel prize winner, he would likely speak out about what has happened to him, and that’s another thing that the Chinese Communist Party did not want to have happen,” Chen added.