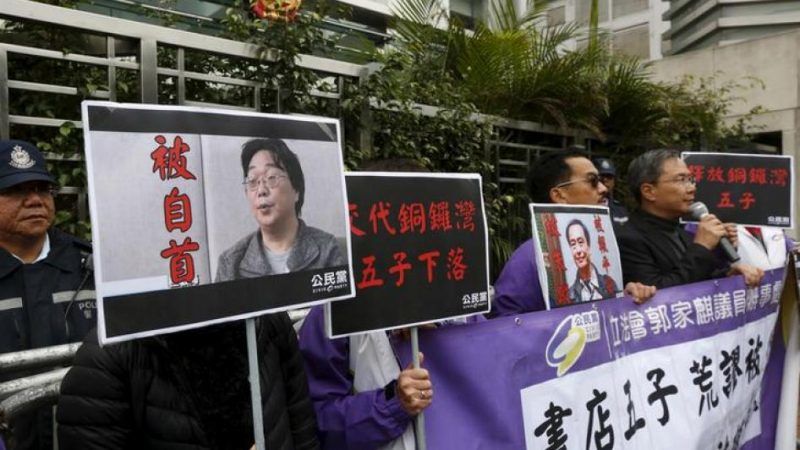 Members from the pro-democracy Civic Party carry a portrait of Gui Minhai (L) and Lee Bo during a protest outside the Chinese Liaison Office in Hong Kong, China on 19 January 2016. [Human Rights Watch]

China’s detention of Swedish book publisher Gui Minhai while he was being accompanied by Swedish diplomats could set a dangerous precedent for other EU citizens, Germany’s ambassador to China said yesterday (6 February).

Michael Clauss said all European countries with diplomatic representation in Beijing were concerned about China’s actions, and “stood behind Sweden” in its efforts to secure Gui’s release and in condemning his arrest.

Gui Minhai — who hasn't been heard from since his abduction by Chinese security forces 2 weeks ago — is awarded the Prix Voltaire by @IntPublishers, as international concern for him builds.

“That China’s authorities treat an EU citizen this way is without precedence. There is a widespread fear that these violations of international laws, as well as (China’s) refusal to allow consular assistance, could happen to other EU citizens in the future,” Germany’s ambassador to China, Michael Clauss, told German daily Sueddeutsche Zeitung and Swedish daily Expressen.

Gui, 53, was arrested on a train to Beijing just over two weeks ago while being assisted by two Swedish diplomats — the second time he has disappeared in murky circumstances into Chinese custody.

Sweden, the European Union and the United States have called for his release, but Chinese authorities have given scant information about Gui’s legal status.

Sweden’s Foreign Minister Margot Wallström on Monday called the seizure a “brutal intervention” that was “in contravention of basic international rules on consular support.”

Gui was one of five Hong Kong-based booksellers — known for publishing gossipy titles about Chinese political leaders — who disappeared in 2015 and resurfaced in mainland China.

Gui was on holiday in Thailand at the time. He eventually surfaced at an undisclosed location in China, confessing to involvement in a fatal traffic accident and smuggling illegal books into the mainland.

Chinese authorities declared they had released him in October but his daughter Angela Gui, 23, told AFP that he was under “loose house arrest” in the eastern mainland city of Ningbo.

Angela Gui said she fears he may now be put on trial and receive a longer sentence, jeopardising his health.

Doctors in Ningbo said her father may have the neurological disease ALS — he had been on his way to Beijing to see a Swedish specialist.

“If he does have ALS, perhaps he might not have that much time left,” she told AFP.

Our report: China says Swedish publisher #GuiMinhai held under criminal law, the first official confirmation he's in Chinese custody after he was seized under the eyes of Swedish diplomats last month. https://t.co/P4N3Dg9w3k