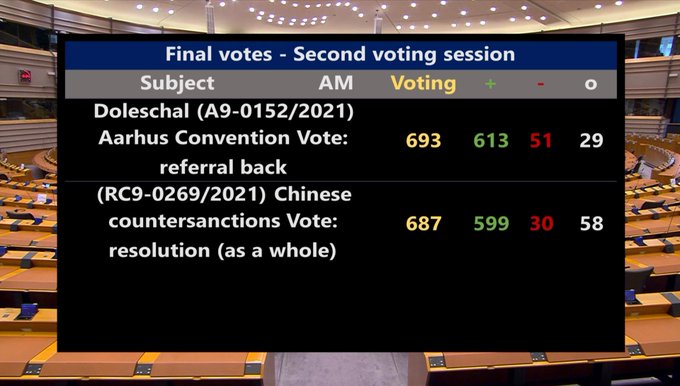 A screen shows the result of MEPs vote against the ratification of a new investment pact with China until Beijing lifts sanctions on EU politicians. [European Parliament]

The resolution to freeze ratification passed with 599 votes in favour, 30 votes against and 58 abstentions.

Huge majority in the @Europarl_EN to freeze the EU – China Investment Agreement, until the sanctions imposed by the Chinese authorities on European politicians are lifted. R.I.P. #CAI

The EU-China Comprehensive Agreement on Investment, agreed by negotiators in December after seven years of talks, aimed to put EU companies on an equal footing in China and cement Beijing’s status as a trusted trading partner.

But Beijing imposed sanctions in March on 10 EU politicians, as well as think-tanks and diplomatic bodies, in response to Western sanctions against Chinese officials accused of the mass detentions of Muslim Uyghurs in northwestern China. 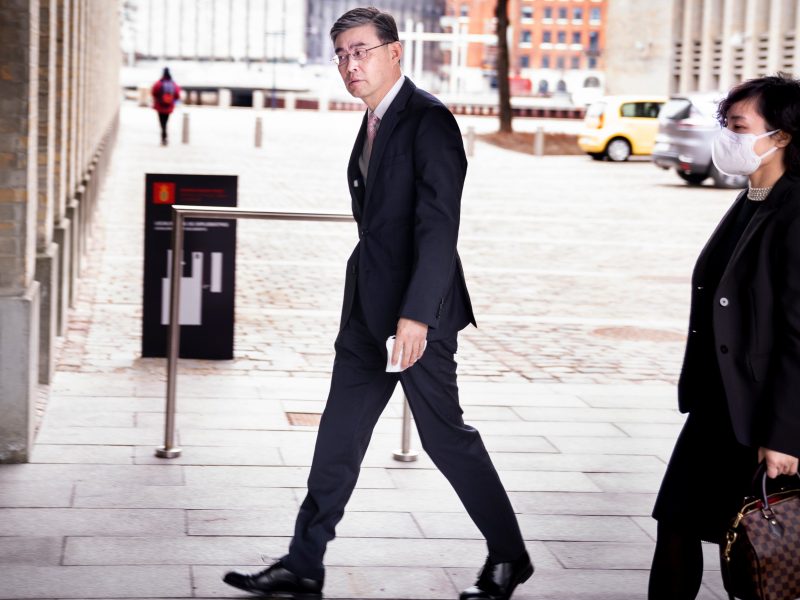 China’s sanctions include five members of the EU assembly and its human rights sub-committee.

“With its sanctions, China has miscalculated. They should learn from their mistakes and rethink. Because of China’s sanctions, the Comprehensive Agreement on Investment has been put into the freezer,” said Reinhard Butikofer, a German EU lawmaker who Beijing targeted with its sanctions.

EU lawmakers say the Chinese sanctions are not based on international law, while the bloc’s measures, like those of Britain and the United States, tackle abuses of human rights upheld in United Nations treaties.

The parliament “demands that China lift the sanctions before dealing with (the investment accord)”, it said in its resolution, which is not legally binding but is now the assembly’s official position. “EU-China relations may not continue business as usual,” it said.

In response to the resolution, China’s mission to the EU said the investment agreement was “mutually beneficial” and not a “favour” from one side to the other. China’s sanctions were a legitimate response to EU actions, it said.

“China has all along sincerely promoted bilateral cooperation and hopes the EU will meet us half way,” the mission said in a statement posted on its website on Friday.

The impasse is a setback for both China and the EU. Ratification of the pact would allow greater protection of European investment and intellectual property rights in China. China was hoping for improved international standing as a fair and respectful trading partner, European diplomats say.

Activists and UN rights experts say at least 1 million Muslims are detained in camps in Xinjiang. The activists and some Western politicians accuse China of using torture, forced labour and sterilisations. China denies rights abuses in Xinjiang and says its camps provide vocational training and are needed to fight extremism.

The EU positions vis-à-vis China appear to fluctuate from enthusiasm to obstruction. On Wednesday EUIPO, the EU Intellectual Property Office, announced the inclusion of Chinese trade marks into TMview, the intellectual property (IP) database which includes all the registered trademarks of the 75 participating IP offices.

EUIPO called its agreement “a milestone in EU-China trade relations” and “a step forward in the transparency of the international trade mark system, which will incorporate approximately 32 million Chinese trade marks”.

The Executive Director of the EUIPO, Christian Archambeau, said the move will help Chinese and European businesses, of all sizes, including the small and medium-sized enterprises who are increasingly tackling global markets.

TMview contains the trade mark applications and registered marks of all EU national IP offices, the EUIPO and a number of international partner offices outside the EU.