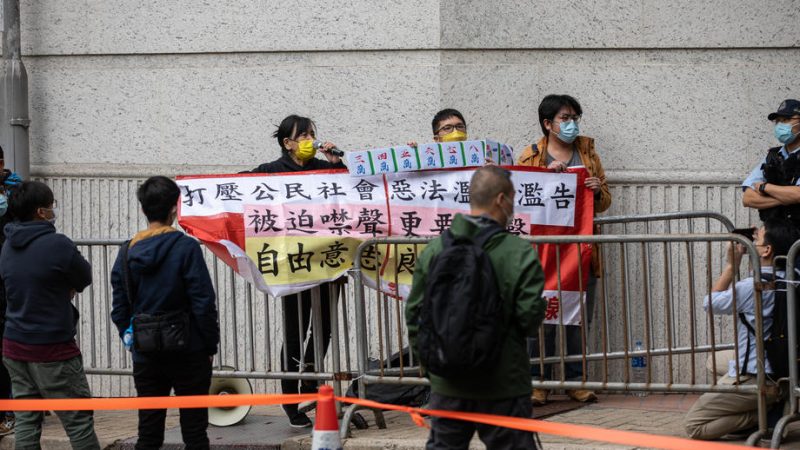 China has overseen a sweeping crackdown in Hong Kong in response to huge and often violent democracy protests two years ago.

It imposed a national security law in the former British colony that criminalised much dissent and introduced political rules that vet the loyalty of anyone standing for office.

The first public vote under this new order was held on Sunday for the city’s legislature, with a historic low turnout recorded and the number of those directly elected slashed from half to 22%.

Figures showed just 30% of the electorate cast ballots, the lowest rate both of the period since the city’s 1997 handover to China and the British colonial era.

Turnout at the last legislature polls in 2016 was 58%, while the 2019 district council elections, when pro-democracy figures won a landslide, saw a record 71%.

The foreign ministers of the G7 group of most developed nations expressed “grave concern over the erosion of democratic elements” in Hong Kong’s electoral system after the poll.

The new vetting process “to severely restrict the choice of candidates on the ballot paper undermined Hong Kong’s high degree of autonomy” under the principle of “One Country, Two Systems” agreed for the handover of the territory from the UK to China in 1997.

The foreign ministers of Canada, France, Germany, Italy, Japan, the UK and US called on China “to restore confidence in Hong Kong’s political institutions and end the unwarranted oppression of those who promote democratic values and the defence of rights and freedoms”.

The European Union’s foreign policy chief Josep Borrell said in a statement that the poll was “yet another step in the dismantling of the ‘One Country Two Systems’ principle,” and called for a “high degree of autonomy as well as respect for human rights and fundamental freedoms, democratic principles and the rule of law” in Hong Kong.

"The EU sees this election, in combination with the ongoing pressure on civil society, as yet another step in the dismantling of the ‘One Country Two Systems’ principle." Statement by HR/VP @JosepBorrellF on the Legislative Council Election in Hong Kong https://t.co/dM3aE3YyJR

In an earlier statement, Britain, the United States, Canada, Australia and New Zealand had rebuked the new system in even stronger language, saying “these changes eliminated any meaningful political opposition”.

“We also remain gravely concerned at the wider chilling effect of the National Security Law and the growing restrictions on freedom of speech and freedom of assembly, which are being felt across civil society,” the five Western allies added.

China called on Hong Kongers to embrace the new rules that they say will restore stability and root out disruptive “anti-China” elements for good.

“Hong Kong is now back on the right track,” she told reporters.

“We cannot copy and paste the so-called democratic system or rules of the Western countries.”

In March, a 1,500-strong committee stacked with Beijing loyalists will pick the city’s next leader.

With her public approval ratings at around 36%, Lam has declined to say whether she will seek another term.

Hong Kong has never been a full democracy under either colonial Britain or China, the source of years of protests.

But Beijing’s crackdown and political reforms mean Hong Kongers have less say in who runs their city than they used to.

Most of the city’s prominent democracy activists — including many former elected lawmakers — are either in jail, in exile or disqualified from standing.

Nathan Law, a former lawmaker now living in Britain who is wanted by the Hong Kong authorities, called the weekend’s vote a “fake election”.

“The boycott from Hong Kong people shows there’s no mandate to this legislature,” he wrote on Twitter on Monday.

Alongside screening out “anti-China” activists, directly elected positions in the legislature were slashed to 20 out of 90, down from half.

The largest chunk — 40 — were picked by the 1,500-strong Election Committee, which will also choose the city’s next leader.

The remaining 30 were chosen by larger pro-Beijing committees that represent special-interest and industry groups.

Only a dozen candidates who made it through the vetting process were identified as “centrist” or “non-establishment” by local media, but none won enough votes.

The result is a legislature now stacked with government loyalists similar to the Chinese mainland’s rubber stamp law-making bodies.

“The new Legislative Council, now under the complete control of patriots, will function effectively as the guardian of national security and unity,” Lau Siu-kai, vice-president of Beijing’s top Hong Kong think tank, wrote in the state-run China Daily.

Analysts warned the new system could leave the city’s rulers even more out of touch with its residents.

“The tension between the authorities and the people will remain in place for a long time while the legislators won’t be mediators because they have to toe Beijing’s line,” Chung Kim-wah of the Hong Kong Public Opinion Research Institute told AFP.