Brussels must stand up to Big Brother Beijing 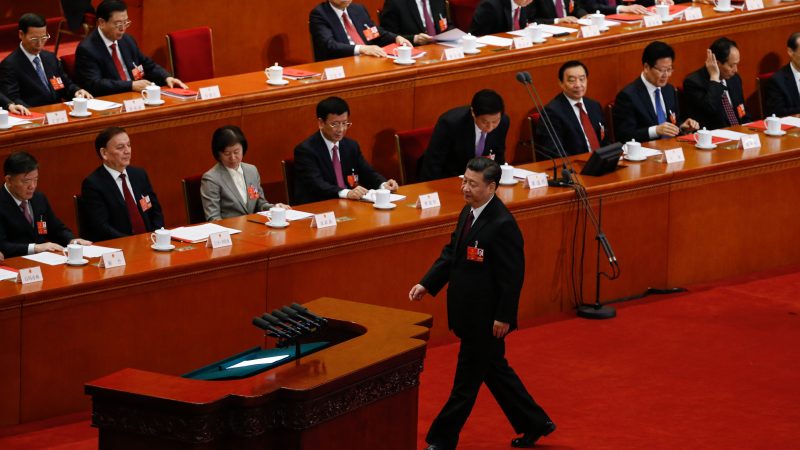 Chinese President Xi Jinping arrives to deliver a speech during the closing of the first session of the 13th National People's Congress (NPC) at the Great Hall of the People in Beijing, China, 20 March 2018. [EPA-EFE/ROMAN PILIPEY]

Bart Broer is a Research Fellow at the EU-Asia Centre.

There have been increasing media reports of what is portrayed as China’s latest authoritarian crackdown on its citizens: the development of a ‘social credit system’ – those familiar with the Netflix series Black Mirror have aptly pointed out such a system’s parallels to the show. By accumulating all known data of its population in one central database, Beijing would monitor the behavior of its citizens in real-time.

Conduct deemed disadvantageous to social stability could be punished through the imposition of constraints on social and economic mobility. Jumping the lights occasionally? No more high-speed trains. Caught using a private network to circumvent the Great Firewall? No more hotel stays free of deposit.

91% of adult Americans have a credit rating. Due to China’s weak consumer credit infrastructure, only a quarter of adult Chinese do. This has inhibited the ability of financial institutions to judge whether an individual may default on a loan. The Chinese Ministry of Commerce has estimated that the annual economic loss caused by the lack of credit information amounts to over EUR 77 billion.

From the perspective of Beijing, the predominant aim of this system is to strengthen nation-wide creditworthiness as well as trust in financial institutions. Under Xi’s plans, individuals and enterprises may be reprimanded only if they defaulted on a court order issued to repay outstanding commitments.

It is important to understand that as of today, no single national rating system has been established. Instead, an ‘ecosystem’ of rating systems has developed in the public and private sector – some of which have indeed prevented millions of people from taking flights or from applying for government jobs.

However, financial creditworthiness is not the credit system’s sole aim. The credit system is a policy tool to achieve an array of normative objectives. The algorithm used in Alibaba’s chief social credit system Sesame Credit rates its customers not only on their contractual and credit history, but also on the type of websites visited, the type of products acquired, and the respective ratings of their inner-circle contacts. After Beijing obliged all entities operating in China to apply for a ‘social credit number’ in July this year, it has forced a number of foreign airlines to discontinue listing Taiwan as an independent territory. Failure to comply would negatively affect these airlines’ social credit.

Indeed, the system is used as a vehicle to impose the regime’s values on foreign entities. Some argue that this amounts to a direct interference in the sovereignty of other states. Will Beijing, under a shroud of social credit, start inhibiting NGOs, think tanks, universities and businesses in China from articulating themselves on other sensitive issues? Could Beijing even start rating EU nationals, applying the same yardsticks and standards applied to Chinese citizens?

The EU should be concerned. In 2015, the Luxembourgish consulate in Shanghai agreed to fast-track Schengen visa applications for applicants presenting a personal Sesame Credit report. Luxembourg is unaware of the variables used to construct the applicant’s score. Should a Member State of the EU implicitly endorse a system, constructed by Chinese state-owned enterprises, that rates its citizens on the basis of a Chinese perception of ‘rightful’ traits and of ‘rightful’ behavior?

For now, participation in credit systems remains voluntary. There is no single agency managing the entire body of data generated, and no individual aggregate scores are assigned. Nonetheless, as illustrated by the Taiwan case, China’s social credit plans will form an increasingly serious component of China’s foreign policy.

Therefore, the EU must engage with Beijing now. Whilst acknowledging that social credit systems are unprecedentedly inclusive and provide credibility to China’s credit infrastructure, the EU must ensure that European businesses and NGOs active in China are safeguarded from the nefarious impact of Beijing’s ambitions in this sensitive field.

Various MEPs have proposed that the EU consider measures to strengthen democratic resilience to counter Chinese attempts to influence Europe under the veil of social credit. The EU might also consider limiting the export of European technologies used in the construction of social credit systems.

The Council’s recent agreement to discuss the establishment of an EU-wide human rights sanctions regime is a welcome first step towards holding European or Chinese entities accountable for complicity to human rights violations by facilitating the construction of social credit systems. Through economic diplomacy and other means, the EU and its Member States must undertake to shape Xi’s milestone social credit strategy, ensuring that algorithms used are transparent.

But in order to preserve the EU’s credibility, it ought to address the right points of criticism on the right issues. China is not turning into a Black Mirror episode – at least not yet – but the EU has many reasons to be concerned with Xi’s plan. The EU must engage with China now.

One response to “Brussels must stand up to Big Brother Beijing”