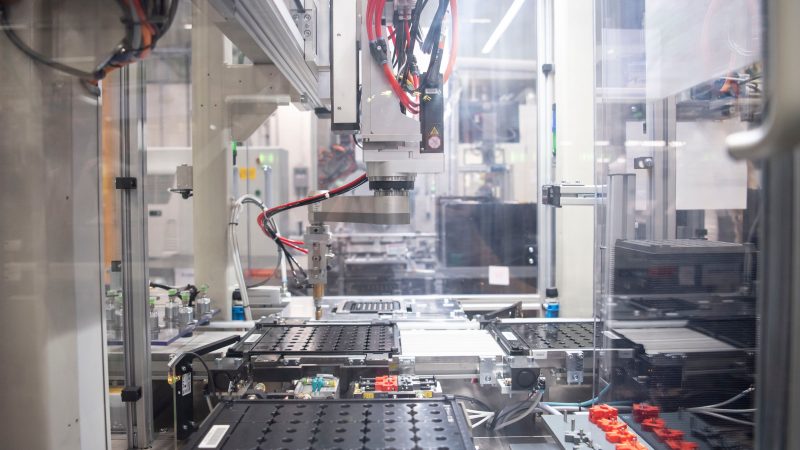 A production line of lithium-Ion coin batteries at a factory of the battery manufacturer Varta in Noerdlingen, Bavaria, Germany, 20 July 2020. [EPA-EFE/LUKAS BARTH-TUTTAS]

Neither the creation of a circular economy nor any other single measure alone won’t offer a silver bullet solution to the rising demand of critical raw materials (CRMs), argues Frank Umbach.

On 5 May the International Energy Agency (IEA) has warned in a new study that the demand of critical raw materials (CRMs) would quadruple for implementing the targets of the Paris agreement and the lack of investment in new mining projects of CRMs may raise the costs of clean energy technologies and slow down the worldwide energy transition.

The European Commission has published at the same day as the IEA a new update of its March 2020 industrial strategy by reviewing its exposed vulnerabilities in 2020 and its strategic dependencies, both technological and industrial, and includes again the CRMs.

For enhancing the resilience of its supply security of CRMs, the EU has supported an “open strategic autonomy” and an expansion of European mining projects of CRMs to reduce its high import dependencies on CRMs – particularly from China.

Last January, Chinese media articles reported again that Beijing was considering again export controls of its rare earths elements (REEs) and semi-finalized products such as magnets, which are particularly important for the defence industry and renewable industry.

Already before, China has increased its production quota for these critical raw materials (CRMs) by almost 30% and the annual production quota up to 140,000 tons (from 100,000t) under its five-year plan through 2020.

Both decisions had been the result of taking defensive measures against new US trade sanctions but also of the rapidly rising demand of high-tech products such as electric vehicles and renewable energies which all need rare earths and other CRMs.

China is the only superpower, which has positioned itself strongly throughout the entire clean tech supply chain. It includes the most important CRMs and their refining capacities. At present, China provides 98% of the EU’s supply of REEs, and around 62% for its defined 30 CRMs of 2020.

Since 2020, detailed analyses of major supply chains and the EU’s dependencies on critical supplies have been conducted with the conclusions of a greater “open strategic autonomy” and relocating some critical supply chains (mining as well as refining capacities) to Europe.

In the EU’s understanding, “strategic autonomy” does not mean complete self-sufficiency or economic-political protectionism by isolating itself from the world. It rather means having alternatives, competition, and avoiding “unwanted dependencies both economically and geopolitically”.

The proclamation of a “European Raw Material Alliance” in October 2020 also seeks to enhance an “open strategic autonomy” for strengthen­ing Europe’s supply security of CRMs.

The European Commission has been working on CRMs since its “raw materials initiative” of 2008. The rising concerns and geo-economic importance are also reflected in its list of CRMs which is being updated at least every 3 years. The number of CRMs has risen from 14 CRMs in 2011 to 20 in 2014, 27 in 2017 and 30 in 2020.

The present demand trend is insepara­bly linked with the global expansion of “green technologies”, including renewable energy resources (like solar and windmills) and batteries, which are heavily dependent on a stable supply of CRMs.

The EU’s strategic objectives of its “European Green Deal (EGD)” and the further expansion of renewables (for instance: wind power capacity is expected to increase 25-fold by 2050) can only be realized with a rising use of CRMs.

For electric vehicle batteries and energy storage, the EU expects a demand rise up to 18 times of lithium, 5 times of cobalt, and 10-fold of rare earths by 2030. By 2050, its lithium demand may grow up almost 60 times and its cobalt needs around 15 times.

By developing own supplies of lithium, rare earths and others whilst diversifying its imports, the Commission hopes to become 80% self-sufficient on lithium already by 2025 and have its own rare earths mining and refining capacity ready by 2030.

The commerciality of domestic mining projects in Europe can change as it depends on evolving market prices, its policies, regulatory frameworks, and financial support.

A positive example can be seen in the Norwegian “Bjerkreim Exploration Project” of the UK based exploration company Norge Mining plc. The total mineral Resource Estimate contains more than 1,79 billion tonnes, classified as a world-class status, with an exploration target of between 2.4 and 4.0 billion tonnes containing vanadium, titanium and phoshate – all three classified officially by the EU as CRMs.

The found also highlights the global European significance of Norway’s untapped mineral resources, which can play a future key role in the supply of EU CRMs.

The EU’s new resource security strategy also emphasizes the need to enhance sustainability in the light of the EGD and to meet the “green” ambitions with a greater attention of the ecological footprint of mining, refinement (“sustainable mining”) and end products.

Also, they must be imported via longer distances of transport, which produces additional emissions to their extraction. According to a study of the Austrian Federal Economic Chamber, 1 ton of additional emissions in Europe resulting from increasingly intermediate European products leads to average global savings of 1.24 tons of CO2 equivalent in all material sectors.

Other research analyses suggest that each ton of metal Europe produces emits up to 8 times less carbon than its equivalent from China.

Due to a lack of a pro-active public communication strategy for supporting mining projects in Europe, a new conflict of interests might emerge and be particularly challenging for NGOs and the Green parties as they have to decide what is more important for them: local nature and environmental protection or effective and sustainable global climate mitigation efforts.

The decarbonization of the world’s energy system as a pre-condition of mitigating global climate change won’t be realized without a decrease of imports and increasing domestic mining, refining, and processing of CRMs.

Neither the creation of a circular economy nor any other single measure alone won’t offer a silver bullet solution to the rising demand of CRMs and achieving the EGD emissions’ targets by 2030 and 2050.