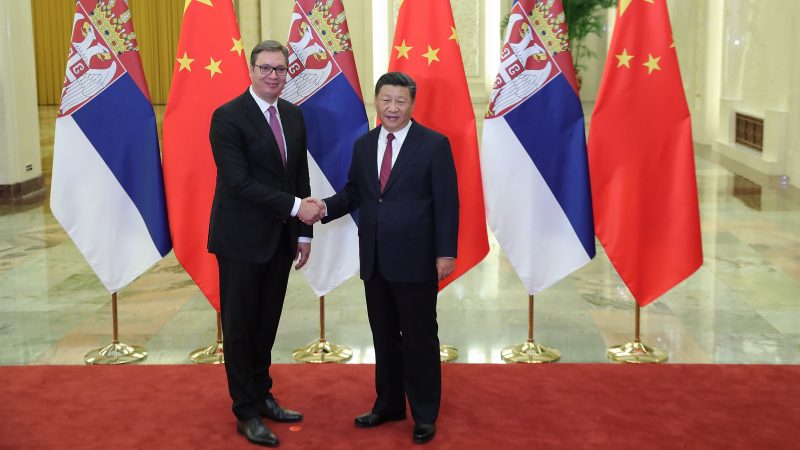 File photo. The President of Serbian Aleksandar Vucic (L) shakes hands with Chinese President Xi Jinping (R) at The Great Hall Of The People on 18 September 2018 in Beijing, China. [Pool/EPA/EFE]

China benefits from divisions that prevent the EU from forming a unified front against it. That is why relations with EU members Hungary and Poland, as well as with the Western Balkans and Serbia in particular, are getting stronger, writes Antonia Colibasanu.

Earlier this month, a diplomatic row erupted between China and Lithuania. Actually, the spat started brewing in May, when Lithuania decided to leave the 17+1 initiative, a project established in 2012 by Beijing to strengthen ties to the countries of Central and Eastern Europe.

Then, in July, the government in Vilnius said it would allow Taiwan to establish a representative office in Lithuania under its own name, rather than “Chinese Taipei,” a decision Beijing criticized as a violation of its “one China” policy. In response, on 10 August Beijing recalled its ambassador to Lithuania and asked that Vilnius recall its ambassador to China. A week later, it also suspended freight train service to Lithuania.

This may seem like a minor spat between Beijing and a relatively minor European country, but as a member of the EU, Lithuania’s foreign policy moves have broader implications for the bloc.

Its dispute with Beijing could make it harder for the EU to reach consensus on how to manage its relationship with China. But for Beijing, that’s a good thing. It benefits from divisions that prevent the EU from forming a unified front against it.

That’s why, even as its relations with the Baltic states grew increasingly tense, its relations with other EU members – namely, Hungary and Poland – as well as the Western Balkans were getting stronger. In these places, China sees an opportunity to expand a growing wedge and strengthen its foothold in Europe.

Under China’s flagship Belt and Road Initiative, the 17+1 format was designed as a way for Beijing to build economic ties to Central and Eastern Europe through investments and promises of better access to the Chinese market. Since the program’s inception, however, China’s involvement in the region hasn’t been balanced across all the participants.

Beijing has been eager to partner with European countries that want to keep their foreign policy options open. Chief among them has been Hungary, which is likely China’s closest ally in the region.

Hungary is an important ally to China because of its willingness to defy Brussels on a number of fronts. Hungary has a long history of balancing between powers – most notably the West and Russia, but increasingly also China. By avoiding siding with one power over any other, Budapest has found that it can reap the most benefits.

Poland is another country with which China is developing closer ties. Like Hungary, Poland has had a contentious relationship with Brussels over issues relating to the rule of law and EU values.

In the past, Poland has been wary of getting too close to China because of its strategic relationship with the United States, but since the start of this year, its relations with Beijing have improved.

According to the Polish Economic Institute, Poland was among the top destinations in the EU for Chinese investment in 2020, totalling an estimated $1 billion. Bilateral talks have also intensified.

Warsaw’s overtures to Beijing are meant to send a message to Washington that it needs to continue to engage with its traditional allies in Eastern Europe.

After Lithuania pulled out from 16+1, other EU members have also signalled their displeasure with the initiative – Bulgaria, Estonia, Latvia, Romania and Slovenia chose to send ministers instead of heads of state to the last 17+1 summit in February – but none have left the group so far.

China and the Western Balkans

While most Eastern European countries are most interested in growing their exports to China, Beijing’s interest with this group has been focused on building infrastructure.

Investment in the manufacturing sector has usually been linked to supporting investment in infrastructure. In EU countries, such investment needs to meet environment and transparency rules, a complicating factor for China.

By contrast, the Western Balkans is wide open to large Chinese investment projects. Serbia has been the most welcoming country to Chinese investment. More than half of all Chinese projects by value in the 16+1 group are located in Serbia.

Most involve the building of major transport infrastructure, including the construction of parts of the EU’s Pan-European transport system (the Corridor X railway and highway sections, Corridor XI highway, and the Mihajlo Pupin bridge and the Belgrade metro network).

Chinese companies have also bought some of Serbia’s largest industrial complexes, including the Smederevo steel plant and the Bor copper mining and smelting complex. China has invested to modernize two of Serbia’s largest lignite-fired power plants, the Kostolac B3 and Kolubara B power stations.

The lack of economic progress and the socio-political instability of the Western Balkans make it susceptible to the influence of an outside power promising salvation. Until recently, the EU was expected to be the saviour, providing funding for the reconstruction after the wars of the 1990s while demanding reforms to shore up democratic rule.

Others hoped the US would lend a hand, and others still thought Russia could be a better ally on security matters.

The hope of EU membership is fading, so these countries are left to look to Russia and China for help. Russia has its own problems, but China seems ready and willing to step in.  Although China isn’t an immediate challenge to the EU, US, and Russia in the region, its influence is growing and will work to its advantage.

At the same time, Beijing portrays these relationships at home as important steps toward achieving the ultimate Chinese dream of a central role for China on the world stage.