Time for Europe to beef up its China strategy

By David Fernandez and Fabrice Pothier 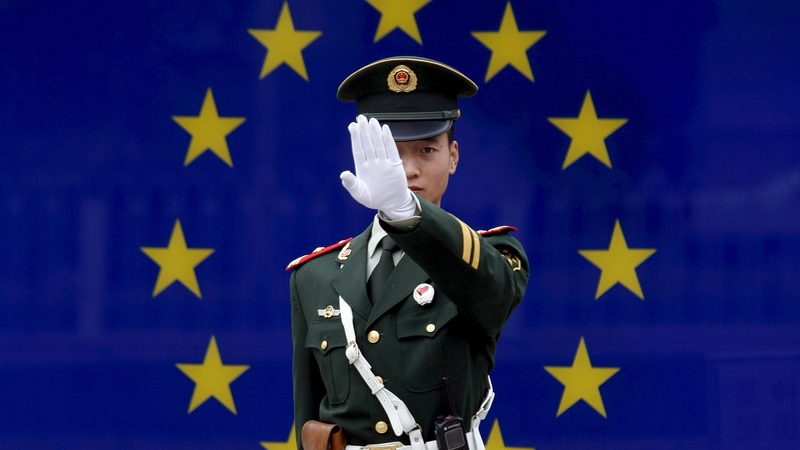 A Chinese paramilitary police officer in front of the image of the European Union (EU) flag at the EU embassy in Beijing, China. [EPA/MICHAEL REYNOLDS]

The recent controversy over whether Beijing pressured the European External Action Service to water down a critical report on Chinese disinformation is just one piece of a bigger puzzle, write David Fernandez and Fabrice Pothier.

Beijing has been building a political and economic beachhead into the European continent for the past decade, with a recipe of strategic investment leveraged to increase its influence in European capitals.

A year ago, Europe began to wake up to this challenge, branding China a ‘systemic rival’. The European Council endorsed ten actions that sought to re-balance the relationship with China. A year later, based on an audit we conducted, the new European strategy has failed to alter China’s economic practices and global posture.

Even when the EU has made some progress in building its own safeguards against Chinese economic predation, Beijing seems unphased. Negotiations for a Bilateral Investment Agreement, which would require China to make some internal reforms, were stalled even before the COVID-19 crisis.

And on matters of EU-China cooperation on global issues, like Africa or Human Rights, the picture is worse than a year ago.

Beijing’s opacity and its systematic disinformation campaign in Europe during Covid-19 should convince even the most optimistic that time has come for Europe to gear up its strategy.

The experience from the Eurozone’s periphery during the financial crisis shows how China loves to snap up a bargain. With economic presence comes political influence. In Greece, for instance, these investments have undoubtedly played a role in Athens’ vetoes of EU resolutions critical of China.

But playing defence vis-à-vis China is clearly not enough as our report shows. Instead, the EU should drive a grand strategy to constrain China’s efforts to promote its systemic rivalry.

This should begin by devising a new industrial and supply chain strategy not just for the Single Market but for the European continent as a whole.

If the strategy should focus on those manufacturing products and supply chains deemed strategic for Europe, it should do so by also including some of the EU’s critical European partner, starting with the United Kingdom and Norway but also Ukraine, Turkey and Serbia.

China (and Russia) have well understood that building influence in these contested places amounts to keeping Europe weak. Europe should be bold and accelerate their industrial integration in the European economy.

The EU already has close economic and regulatory alignments with many of them. They can work together on setting new global standards on everything from global public health to artificial intelligence, trade to sharing data.

And they should work more closely together to caucus as like-minded states in multilateral bodies such as the World Health Organisation to counter-balance Beijing influence and US disengagement.

Realistically, such a China strategy cannot happen without some degree of transatlantic cooperation. Despite a broad convergence of views on China on both sides of the Atlantic, the Trump Administration has badly played its hand with abrasive threats over 5G and a transactional zero-sum approach to international relations.

However, Europe and US’ common interests vis-à-vis China will not change in November’s election. On the contrary: if President Trump is re-elected, China will stay central to his new administration’s agenda. If Joe Biden is elected there will undoubtedly be a change of tone and style but, on this issue at least, the Washington consensus will remain broadly similar.

To avoid falling into the trap of crisis management like its predecessor, the new European Commission needs to find creative ways of dealing with the growing China factor.

Building a European continental industrial strategy, working more closely with a group of like-minded Asian economies, and not giving up on transatlantic cooperation on China can be part of a more offensive approach.

Purely playing defence will only let Europe fall further into China’s debt-trap diplomacy. It’s time we think strategically about China, and build a new alliance that aligns with both our values and our interests.