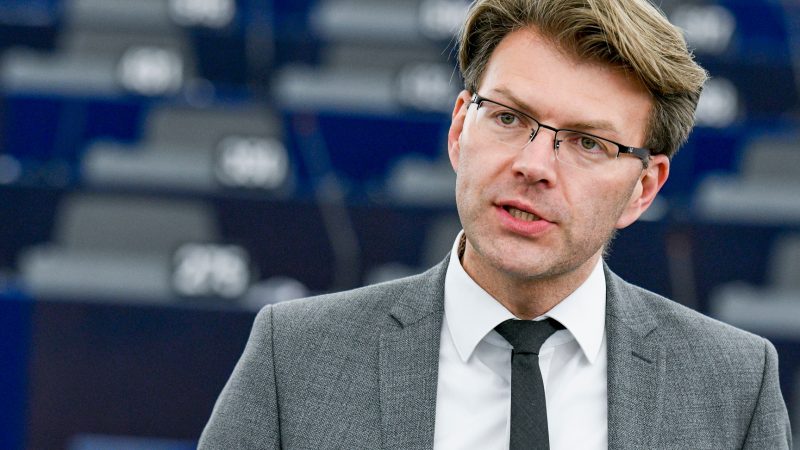 When it comes to raw materials, "I would prefer doing something that is less ambitious on the OECD level rather than doing something more ambitious" in Europe that creates double standards, says Daniel Caspary. "That’s generally the EPP approach – better slower than never." [© European Union 2018 - Source : EP]

A sustainable deal would tackle not only CO2 emissions but also the social and economic development of Europe and the countries where raw materials are mined, says centre-right MEP Daniel Caspary.

Daniel Caspary is a German MEP from the centre-right European People’s Party (EPP), affiliated to Angela Merkel’s CDU. He is a member of the European Parliament’s Committee on International Trade and chair of the Delegation for relations with the countries of Southeast Asia and the Association of Southeast Asian Nations (ASEAN).

He spoke to EURACTIV’s Laura Cole.

Are critical raw materials high on the European Parliament’s agenda at the moment?

For the trade committee and development committees it is an important topic, but elsewhere it is not recognised as a top priority. The difficulty with raw materials is that prices always go up and down. At the moment the prices are down so it seems everyone else except the European Commission have forgotten about it a bit.

When prices shot up in 2011, and the price of oil was high, it came to everyone’s attention. But even from industry it seems there is less interest than a few years ago. It’s good that the Commission is working on this issue but most of the MEPs are not aware. This is a newly-elected Parliament and it has not been an issue yet.

That being said, the prices will one day be high again. We don’t know for which raw materials and when but for a sustainable business case perhaps it would be better to be aware of it.

Keeping to a 2°C global warming scenario will mean a 1,000% increase in demand for battery metals, according to the World Bank. Do you think there is recognition of the raw materials the transition technologies require, and how most efficiently to use them?

No, there is not a link yet. Look at the young people in our market places at the moment. They are asking for decarbonisation in Europe but only a few are asking who will have to pay the price and where. And more importantly, how we avoid paying that price.

The Greens and the socialist side of the Parliament have a green agenda, and that is greening Europe as soon as possible. Their focus is on greening it, not so much taking care of the workers in the companies or the supply chains down the line.

What does it mean for a worker in a German car producing company for example? As a big conservative party we are often criticised for ‘greening too slow’ but we are trying to keep the workers in their companies.

How can a German worker buy an electric car if he doesn’t have a job anymore? Would perhaps a longer transition be more sustainable in the long run?

A problem, I think, is too many people talk about a Green Deal or a Green transition. It has to be a sustainable deal, not a Green Deal. If you only focus only on one issue, it’s perhaps wrongly designed.

Can you explain further what you mean by a sustainable deal?

A sustainable deal would be one that not only tackles climate and CO2 emissions but also the social and economic developments in Europe as well as the social development in those countries where the raw materials come from. That is, the environmental pressures on countries outside of the European union.

Last year, EU Energy Union Commissioner Maroš Šefčovič warned that raw materials risked becoming the new oil. Is having a diverse supply, or moving dependence away from China, a priority for the Parliament’s trade committee?

I think we should not fight against anyone in particular. The problem is not China, the question is how we can find more sources for raw materials. And what is our offer to those countries in return. How do we set up again a sustainable European policy for some African countries or central Asian countries who have them.

Do I think there will be a supply issue? I think as long as we let the markets work, I am quite optimistic.

How could they work better?

Let’s take for example a European company that wants to invest in Mongolia for a gold mine. There are difficulties for them. We now have legislation that means European export agencies have to keep to OECD regulations concerning transparency and environmental impacts.

The Greens and the left now say the OECD is not enough, that we have to put higher standards on our companies. But if a Chinese investor comes and says “I can invest in this mine, for more money, with much less regulation”, does it really help anyone?

Our priority should be addressing the issues on the ground and not only do something to look nice and helps us to sleep well in Europe.

Do you have suggestions when it comes to helping people on the ground, as you say?

First of all, I think a European investment would be better than a Chinese investment, even it doesn’t stick to all of our European legislation.

Is it possible to compete against China without forgoing the human rights and environmental standards?

First of all, we should accept that not everyone at anytime in any country can meet those standards from the first day.

That is a very difficult message for us as Christian Democrats from Germany. When the 3TG [Tungsten, Tantalum, Tin] legislation was created, I had so many contacts with representatives from churches or NGOs who told us it was not tough enough, or that we were blocking and not doing enough.

I said, “yes we are blocking, because at the moment we are doing too much”. I told them they were right, it is not tough enough. There is a problem on the ground and we have to address it.

That being said, what we can see is some small sized companies have already closed down because they aren’t able to meet our European standard. We see that family companies and family mining for instance in Congo will be much more difficult because these small families are not able to fulfil our standards.

So they closed down their mines, or sold them to the big companies and now there are fewer smaller enterprises. I would argue, in most cases, that this is not an improvement.

The question is not whether there is nice-looking legislation on the European side but whether it really helps make supply chains more sustainable. With too much legislation we will get the opposite of what we want, which is the improvement of conditions in those areas.

That is especially relevant to the raw materials area. Sometimes it is better to ask for less than ask for the right thing but too early and too much. Everything in life is about timing.

Do you believe it is too ambitious for EU trade of raw materials to work within the guidelines of the OECD?

For a big global company it is not a problem to fulfil different standards in different parts of the world. But for a small and medium sized company it is difficult. This is why we tried to make a difference between big and small companies, with the threshold.

Should that be voluntary or mandatory?

Not voluntary, but with clear thresholds, clear timetables and phasing periods instead of a sudden change. In that way, de facto we help people more.

When I listen to my colleagues from the Greens I often think I could subscribe to almost all of their arguments. We think alike.

But we should reach it step by step. We shouldn’t set up a hurdle that only the big ones can jump over. That’s generally the EPP approach – better slower than never.

The non-financial reporting directive makes it mandatory for companies to report their actions on social and environmental challenges. This summer, the Commission released non-binding guidelines on reporting for climate too. Do you believe this could clean up raw materials value chains?

To have the reporting mandatory in this field is good because it raises awareness. It makes company boards realise that they have to deal with the issue.

The question is what do you do with the report, what solutions do you draw from them. If we come down too hard and fast with a solution, where for instance, a company closes down production sites in one area and then we have a disinvestment somewhere, then the question of sustainability begins.

We have to balance this out, which is sometimes missing from this debate at the moment.

Let’s talk about CO2 leakage for instance. We see it taking place, we see it every day. We see that there are some sectors where investments in Europe move away. Does it help anyone if we lose the jobs and the emissions continue to exist?

[This interview has been edited for length and clarity]