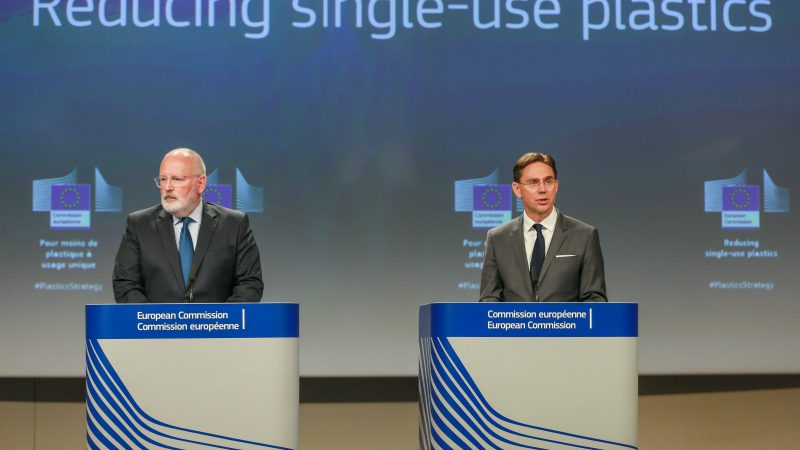 Frans Timmermans (L) and Jyrki Katainen give a press conference on single use plastics proposal at the European Commission in Brussels, Belgium, 28 May 2018. [Photo: EPA-EFE/STEPHANIE LECOCQ]

This article is part of our special report A circular economy retrospective.

The outgoing European Commission has got through a lot of work when it comes to the circular economy but attention is now turning to the future and how to make sure recycling efforts really take off.

Recycling has taken on a decidedly business-orientated slant under the Juncker Commission and circular economy has been championed as a money-making opportunity for Europe.

EU lawmakers have tried to lay the groundwork for a so-called internal market for recycling, by tweaking the waste directive, proposing a plastics strategy and agreeing on new rules to curtail the use of certain single-use plastics.

The latter directive was widely hailed in May 2018 as a strong response to public opinion, which has rallied against plastic marine litter in particular. It has been dubbed the ‘Blue Planet effect’ after a landmark TV documentary shone a light on the deplorable state of some of our oceans.

Next week, the EU Council is expected to give the legislation the final stamp of approval and, after it is published in the EU’s official journal, countries will have two years to transpose its various requirements into law.

The proposal was first suggested as part of January 2018’s plastic strategy and it was published a few months later in May. It means the legislation will have gone from drawing board to being in force in under a year.

Some welcomed the pace of the negotiations as a sign that EU policymakers and lawmakers were united around a common topic, while others were sceptical about whether the Commission had done its homework properly.

Industry players railed against one aspect of the directive in particular: the requirement for single-use bottles to be redesigned so that their caps, one of the most littered plastic items, stay tethered to the bottle.

Multinationals like Coca-Cola and Nestlé said before EU ministers adopted the directive that “investment in mandatory tethered caps will not necessarily lead to the required outcomes” and instead suggested the money would be better spent on increasing recycling collection rates.

The Commission has also been accused of not applying its Better Regulation principles in full to the new rules and of not producing a “meaningful impact assessment” for the tethered cap requirement.

They also pointed out that redesigning bottles would mean increased costs and, potentially, increased CO2 emissions.

However, when publishing its proposal, the EU executive said that “in line with Better Regulation requirements, stakeholder consultations and open public consultation and thorough impact assessments were carried out in preparation”.

A spokesperson for the Commission said “the estimated cost for businesses to comply with the new measures is €2 billion. But the estimated benefit will be equivalent to €22 billion in 2030”.

Asked about the risk of more CO2 as a result, the EU executive acknowledged it but added that “we need to look at the bigger picture: the overall damage from marine litter to tourism, shipping, aquaculture, as well as the environment”.

NGOs have also highlighted the environmental impact of bottle caps. The Zero Waste Europe alliance maintains that “plastic caps and lids from beverage containers are among the most found single-use plastic items on EU beaches”.

This Commission has championed a better regulation agenda from the off and Jean-Claude Juncker even tasked his first vice-president, Frans Timmermans, with making sure proposals were based on “extensive planning and analysis” before the Commission takes action.

Timmermans ended up as the EU executive’s main figure involved in the single-use plastics directive by the end and was even photographed next to a statue of a plastics-breathing dragon during an event organised by anti-waste campaigners.

Circular economy measures look destined to feature heavily in the next legislative cycle too, as much of what the current Commission has worked on will have to be implemented over the next few years.

Member states have a lot of leeway to implement their own measures, as the EU target-setting exercise acknowledged that each country has its own specificities. However, the Commission will retain an important monitoring role.

For example, each country will have to set its own consumption reduction targets for food containers and drinks cups. They are free to curtail their use in whatever way they see fit, including promoting alternative products or making sure they cannot be provided free of charge.

Less direct measures like awareness-raising schemes will also be left up to the discretion of member states.

The Circular Plastics Alliance, launched in late 2018, gathers stakeholder together in one platform. The alliance has been welcomed by the industry and policymakers have been urged to make sure it is kept on the agenda under the new EU cycle after the May elections.

It is meant to help bring the main challenges facing the sector to the forefront and even has the target of ensuring 10 million tonnes of recycled plastic is used in products by 2025.

Industry players have insisted that governments must focus on the collection stage of the recycling process, as demand for recyclable materials is going up but supply cannot keep pace currently.

Tom Emans, managing director of a recycling plant in the Netherlands, recently told EURACTIV that he and other recyclers have the capacity to process more material but lack the necessary “streams” to kick the industry into overdrive.

The recently updated Waste Directive does take collection into account and there are a number of targets member states will have to hit.

As far as the tethered-cap requirement is concerned, the implementation date will be 2024 rather than the original proposal of 2021.

Countries are also going a step further than what the EU has asked of them. France and the Netherlands, for example, have signed up to a ‘plastics pact’ that cranks up the level of ambition even more.

Recycling to save the world

Circular economy is also due to spill over into other sectors in a big way. In November 2018, the Commission unveiled its draft climate plan for 2050 and proposed a number of scenarios that are meant to drag the European economy onto a Paris Agreement-compliant trajectory.

Out of the eight possible pathways, two aim for net-zero greenhouse emissions by mid-century, with the most ambitious of the pair targeting a full-fat circular economy policy in order to slash industrial emissions considerably.

The potential is massive. A study released in summer 2018 showed that by reusing and recycling steel, plastics, aluminium and cement to a greater extent, the EU could cut its carbon footprint by 56%.

Cuts have already been made through seemingly-insignificant measures like changing the design of bottles to make them more lightweight, which means less emissions generated during transport.

On a more global level, the United Nations Environment Assembly has for the past two years focused almost primarily on plastic pollution, particularly marine litter.

At its most recent summit in March, the international community pledged to significantly reduce single-use waste over the next decade but environmental groups concluded that the voluntary pledges were not ambitious enough.