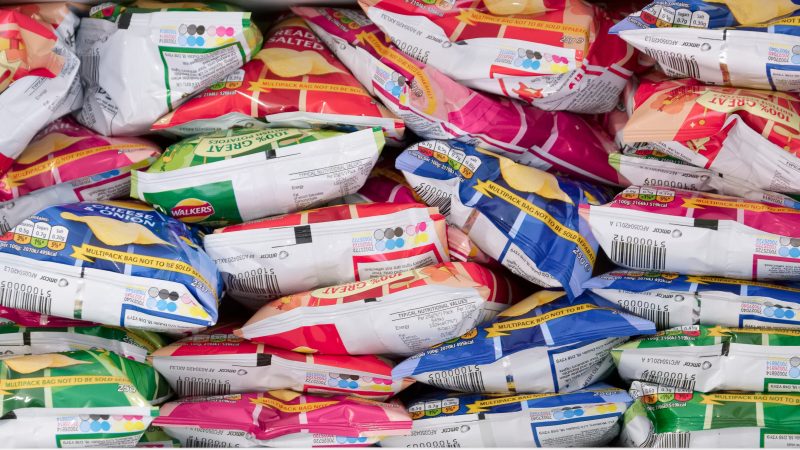 There's a very clear message to the industry that wrappers for food, like crisps and chocolate, need to be recyclable, according to Graham Houlder, project coordinator and managing Director at a Circular Economy for Flexible Packaging (CEFLEX). [Richard Johnson / Shutterstock]

This article is part of our special report Packaging recycling.

Simple design and using at least 90% of the same plastic is the key to making packaging for foods like crisps and chocolate easier to recycle, according to the industry.

To tackle the climate crisis, the European Union seeks to promote the transition to a circular economy where products use less material, contain more recycled content and are easily recycled or reused.

As part of this drive, the European Commission wants to ensure that “all packaging on the EU market is reusable or recyclable in an economically viable way by 2030” – an objective that will be reflected in the upcoming revision of the packaging and packaging waste directive, expected in July.

A key challenge there will be to address so-called “flexible packaging” – the soft plastic wrappings used for foods like crisps and chocolate bars. These are considered hard to recycle because they are lightweight and contain different layers of materials like plastic and aluminum.

“Because the packaging is so lightweight and has so many layers, separating the materials is not economically viable,” says Justine Maillot from the Rethink Plastic Alliance, an environmental campaign group.

But the industry is ready to take on the challenge and is looking at ways of making flexible packaging recyclable by design. 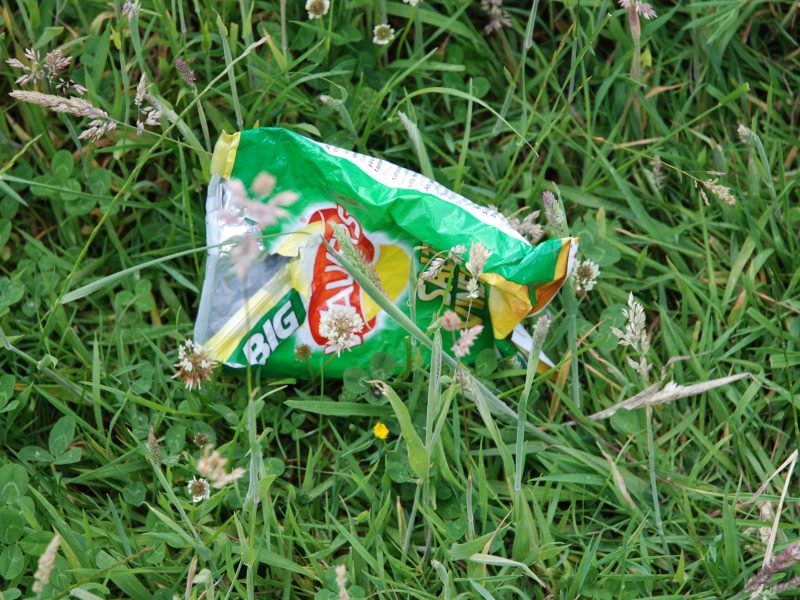 'Flexible packaging' – a test case for the EU’s recycling push

Lightweight soft packaging such as crisp packets or wrapping for chocolate bars are giving headaches to European recyclers who currently have little incentive to buy the collected material. The European Commission will seek to address this in July with its planned revision of the EU’s packaging and packaging waste directive.

Large brands are already getting on board with the idea. Mars is looking at redesigning its packaging to reach 100% recyclability by 2025. Nestlé is also looking at this, with 62% of its total plastic packaging recyclable or reusable in 2020.

And PepsiCo Europe is changing its crisp packets to ensure they are made, as much as possible, of a single type of plastic. That will mean brands like Lays, Doritos and Cheetos will have a minimum of 90% of one particular plastic by 2030.

This is in line with CEFLEX’s guidelines for ecodesign, a traffic light system designed to help manufacturers understand whether a particular type of packaging is compatible or not with mechanical recycling.

According to the guidelines, products should have at least 90% of the same plastic to be fully compatible with recycling facilities. That leaves 10% freedom for inks and materials like aluminium which preserve the freshness of the food by acting as a barrier to oxygen and water.

“Every time you process that plastic, recycle that plastic, make it something new, you will be changing or damaging slightly the polymer. We want to do as little of that as possible so that you get as many lives as possible from the plastic,” said Venetia Spencer from the Polyolefin Circular Economy Platform (PCEP), an industry group representing manufacturers of food wrappers.

Flexible packaging is not only used in the food industry, a lot of it is also produced as wrappers to prevent goods from being damaged in commercial transportation, or as bags for restaurant supplies.

At the moment, this type of industrial and commercial flexible packaging has higher recycling rates thanks to their simpler design and a higher collection rate.

“They tend to be mono [material] because for distribution packaging you don’t need [many] barrier properties to protect it against light or oxygen or water loss. So those tend to be easier to recycle. They also tend to all be polyethylene and they tend to be transparent for a large proportion as well which also helps things,” Houlder told EURACTIV.

For consumer goods, however, it is more complicated. Manufacturers need to weigh usefulness against design, particularly when it comes to barriers to prevent oxygen and water from damaging the food.

“Consumer flexible packaging [is] the more difficult stuff. It’s the small candy wrappers through to coffee pouches or soup pouches and everything in between. So that’s got lots of printing on it and some of it has barrier functionality built into it,” Houlder explains.

Alongside this, the packaging must meet standards for food contact material. At the moment, that means flexible packaging for food products cannot contain material that has been recycled mechanically, said Spencer.

This will be a challenge for Pepsi which has announced an ambition to use 100% recycled or renewable plastic in all its packets by 2030. For the moment, Pepsi will need to use chemical recycling for recycled content that goes into food packaging, but they emphasise that this will only complement mechanical recycling.

There are also challenges when it comes to the inks on food wrappers that brands use to differentiate themselves from their competitors and give information about the product.

“The difficulty to recycle flexible packaging is also linked very much to the chemicals used in that packaging – usually it’s quite heavy in inks and additives, which come in the different layers of the packaging,” said Justine Maillot, from the Rethink Plastic Alliance.

“So removing chemicals of concern will be essential to improve recyclability there. But the very fact that there are so many layers in itself makes it really hard to recycle,” she said.

According to the CEFLEX guidelines, lighter coloured inks are fully compatible with recycling while darker inks are only partially compatible.

However, Houlder does not think it is necessary to ban certain inks, adhesives and barrier materials which make recycling more difficult.

Instead, he says the European Commission should adjust existing ecological taxes in order to drive out problematic inks and reward packaging that is easier to recycle. Conversely, packs containing hard to recycle components would have to pay more. 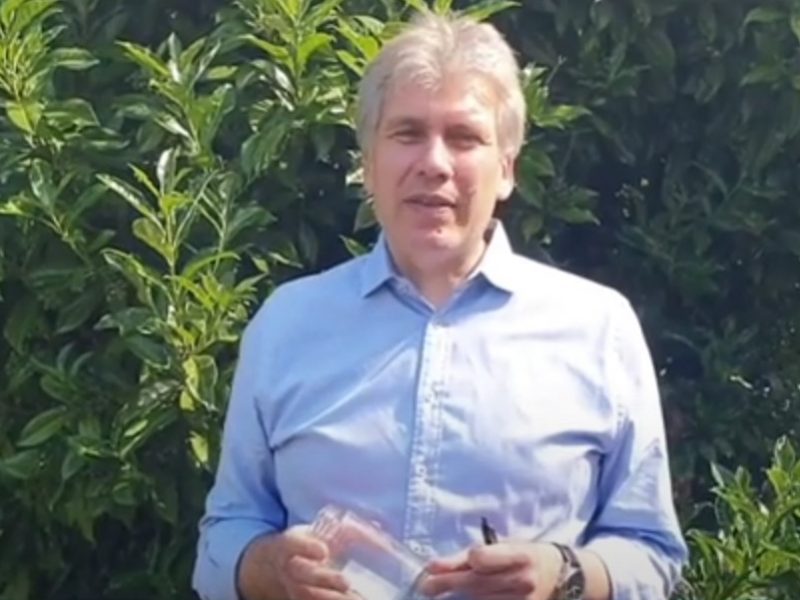 Greater standardisation in design “has to be the way forward” in order to make it worthwhile economically to recycle lightweight packaging such as crisp packets. In practice, this also means reducing the variety of packaging available to the food and drink industry, says Joachim Quoden.

Reduce and reuse before recycling

But while Houlder is “completely convinced” that the industry will meet the European Commission’s aim to have all packaging recyclable and reusable by 2030, the Rethink Plastic Alliance is sceptical.

“Certainly, there can be design requirements to eliminate chemicals of concern that could improve the recyclability of flexible packaging,” Maillot said.

However, she doubts that this will ever become viable economically. “You may be able to recycle maybe the aluminium layer but the plastic layer is not valuable enough, so you won’t be able to do much with it. For cartons like Tetra Pak, it can make economic sense to separate the different layers, but not for flexible packaging which is so lightweight. You would need huge amounts to be able to do anything,” she told EURACTIV.

“So first comes the issue of collection, which would cost a lot of money for a product that has so little value.”

European recyclers agree that improving collection is the starting point. But they also believe it is necessary “to single out and phase out unrecyclable packaging solutions,” says Emmanuel Katrakis of the European Recycling Industries’ Confederation (EuRIC).

“It is very important to ensure that what is placed on the market is effectively recyclable,” Katrakis told EURACTIV, especially because flexible packaging has a very short lifespan.

In terms of technologies, EuRIC is involved in an EU-funded research project called CIMPA, whose purpose is to recycle multilayer plastics used in packaging and agricultural films. But recyclability must also be assessed “based on existing best available sorting and recycling techniques, not the ones that may be used in 5 or 10 years,” he says.

According to Maillot, a simpler solution would be to phase out this kind of packaging and prioritise reusable packaging or other types of packaging that are either easily recyclable or have high value recycled content.

“For food – cookies, biscuits, etc. – we have already seen quite a lot of initiatives to replace flexible packaging with things like glass jars. When it comes to confectionery, there are also opportunities to be put in place refill stations where people can come with their own bags or reusable packaging,” she said. 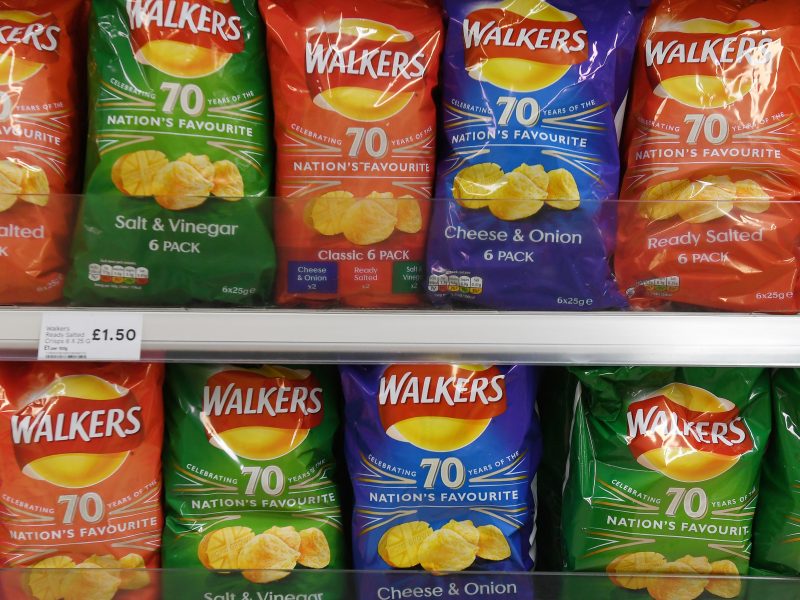 The European Commission has set an EU-wide objective for all packaging to be recyclable or reusable by 2030. But crisp packets are a particular headache for policymakers and the recycling industry because they are so tiny and lightweight.