Dumping garbage overseas is not the right way to go 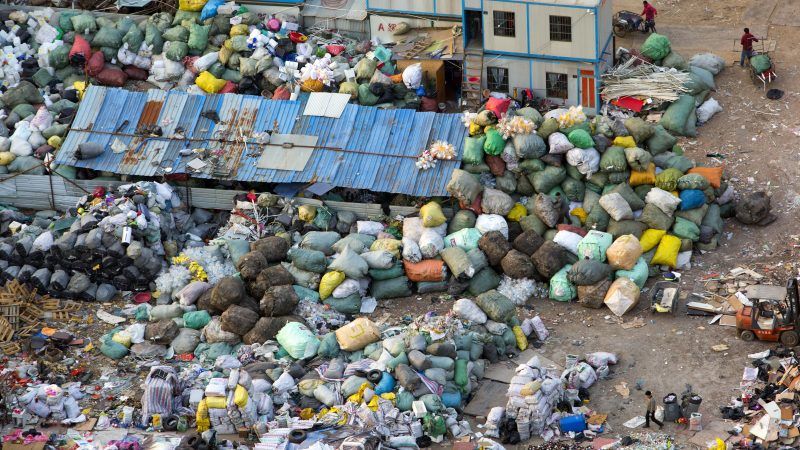 Chinese working at the garbage disposal site in Shanghai. [Shutterstock/Yaorusheng]

During the recent meeting of the World Trade Organisation Council for Trade in Goods, some representatives raised concerns about China’s ban on “foreign garbage” import. Some even asked China to halt its implementation. Zhang Ming explains China’s position.

As Chinese Ambassador to the EU, while quite surprised by such “concerns”, I would like to share my views on why China made such a decision and why China will not overturn the ban.

China is a Party to the Basel Convention on the Control of Transboundary Movements of Hazardous Wastes and Their Disposal adopted in 1989. The Convention provides for and fully recognizes the right of its Parties to prohibit the import of hazardous wastes or other wastes.

China started importing solid wastes in the 1980s, whose annual volume surged from 4.5 million tons to 45 million tons in the past 20 years. A great amount of prohibited wastes, or “foreign garbage” as is often called, were mixed up in the imports, causing great harm to China’s environment and threatening public health. The widely-watched documentary “Plastic China” released in 2015 well captures the problem.

To address the challenge, China decided to ban foreign garbage and to reform the management system of solid wastes import. According to international law, China has the legitimate right to do so.

This is also what we must do to improve our environment and protect our people’s health, as a crucial part of our new development philosophy. The decision is widely welcomed and applauded by the Chinese people.

Before announcing the ban, China had full communication with other parties. It was half a year before the ban was actually put in place that we notified the WTO of the change. Issues arising in the course of implementation have been well addressed through timely coordination.

The Basel Convention stipulates that Parties have an obligation to minimize the quantities that are transported and to treat and dispose of wastes as close as possible to their place of generation. In other words, it is the due responsibility of Parties to do their best to reduce and take care of their own wastes.

Only when this principle is well appreciated can we join forces more effectively to promote green, low-carbon and circular development globally, and to make our planet a cleaner and better place.

Interestingly, those who have expressed “concerns” are all from developed countries. For a long time, well-off and well-equipped developed countries have been dumping their garbage to developing countries. This phenomenon should not be overlooked. It is more of a moral issue that relates to the future of mankind than of a trade issue.

The great Chinese philosopher Confucius said, “Do not do onto others what you do not want others to do onto you.” A famous quote from the Bible goes like this, “You shall love your neighbour as yourself.”

Islam belief has it that “none of you have faith until he loves for the people what he loves for himself”. No matter in which civilisation, it is morally unacceptable to dump trash in others’ backyard. Moreover, as we already live in a global village, troubles shifted to your neighbour will get back to you sooner or later.

For those garbage exporters, it is inadvisable to cry out loud and ask for too much from others, like spoiled children giving little heed to others’ interests. Rather, they should first examine what is going wrong on their part and fulfil their responsibilities.

Developed countries need to rely on their own efforts to address excess waste and endeavour to develop a circular economy. Then they could see what they can do to help developing countries tackle their waste challenge. This is the right way to go.

Many still remember the public health disaster in West Africa in 2006 caused by toxic waste shipped from other countries. The tragedy should have prompted garbage exporters to stop doing the wrong thing. Unfortunately, little has changed ever since.

Mr Erik Solheim, the head of the UN Environment Programme, said “We should see the Chinese decision as a great service to the Chinese people and a wake-up call to the rest of the world”. Now, it is high time that developed nations re-thought their use of plastics and not simply sought alternative foreign dumping grounds.

We could already see encouraging changes in China and elsewhere in the world. The Chinese people are more aware of the necessity of waste separation and sorting and are following more stringent rules on waste management and recycling.

Some American companies are setting higher and more sophisticated standards for waste sorting, and have introduced artificial intelligence to handle wastes. The EU has adopted the first-ever Europe-wide strategy on plastics as part of the transition to a more circular economy and to enhance the Union’s overall capacity for waste disposal.

If China’s ban could trigger other countries to develop more advanced technologies out of a greater sense of urgency and to better serve their own people with a stronger sense of responsibility, China must, indeed, be doing a good deed.