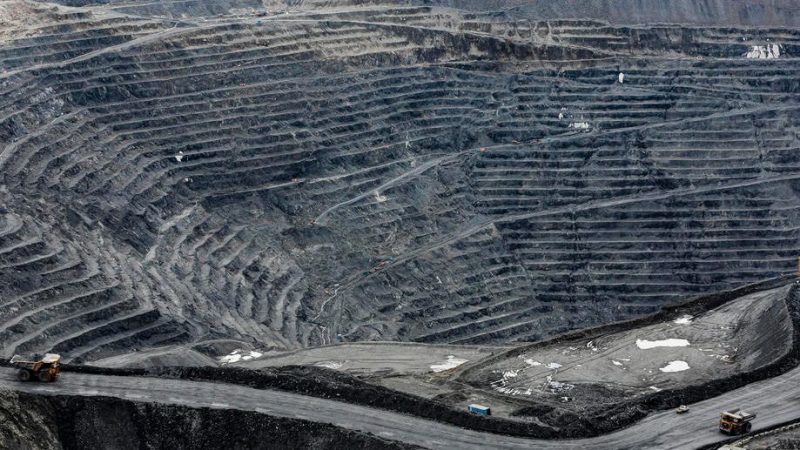 Heavy dump trucks transport waste rock to heaps at the Kumtor gold mine, which is engaged in the development and exploration of gold deposits, located in the Issyk-Kul region of Kyrgyzstan [IGOR KOVALENKO / EPA-EFE]

While certain metals, like lithium and cobalt, are essential for decarbonisation, Europe needs to shift the focus away from mining these materials towards reducing the amount needed and recycling what is used, writes Ann Dom.

Ann Dom is the deputy director of Seas At Risk, the European association of NGOs working to protect Europe’s seas.

The  EU’s circular economy and raw materials policies fail to consider the need to leave metals in the ground and in the seabed. If we dig further and deeper into the Earth’s pristine areas – or indeed eventually mine the moon or asteroids – to satisfy Europe’s insatiable appetite for primary metals, then that much-hyped ‘circularity’ will only ever be illusory.

Our world is finally (and very belatedly) considering leaving fossil fuels in the ground. We should do the same for metals.

‘Security of supply’ of raw materials, particularly of certain metals seen as ‘critical’, is an increasing component of EU policy.

From the 2019 European Green Deal to the Raw Materials Action Plan and new Batteries Regulation, ‘access to resources’ and ‘strategic autonomy’ essentially call on the mining industry to find new reserves of primary metals. This includes the deep-sea – trials have taken place in recent months – and protected areas on land, including Natura 2000 sites.

Mining is one of the world’s most polluting industries and a main contributor to climate change.

The production of seven metals (iron, aluminium, copper, zinc, lead, nickel, manganese) is responsible for 7% of all greenhouse gas emissions, as well as a major cause of biodiversity loss, human rights violations, political instability and forced displacement in the Global South.

At a time when the IPCC has issued a stark warning of how perilously close we now are to the 1.5°C danger limit agreed in the Paris Climate Deal, sacrificing entire ecosystems to fuel a new mining boom is at best careless, at worst criminal, and is entirely incongruous with the Green Deal’s ‘do no harm’ and ‘zero pollution’ mottos.

The much-needed transition to a carbon-neutral economy focuses primarily on technology and innovation fixes, such as the large-scale deployment of renewable energy infrastructure, electric vehicles and digitalisation, all of which are metal-intensive.

The Commission’s 2018 Strategic Action Plan on Batteries called for ‘embracing raw materials extraction’. The EU’s enormous appetite for resources’ is also acknowledged in the new EU Raw Materials Action Plan, which recognises how ‘the underlying problem … needs to be addressed by reducing and reusing materials before recycling them’.

There is, however, no sign of any serious binding targets to reduce Europe’s use of raw materials. Rather, as well as tapping into other continents’ resources, hundreds of new mines are being planned across Europe.

Equally damning is the fact that Europe is a major player in the race to the deep-sea bottom: several European countries hold deep-sea mining exploration licenses in international waters, with commercial mining expected from 2023. Others are considering mining on their continental shelf.

Circularity demands a strong political will to cut resource extraction. The status quo – relatively cheap metals flooding the market at huge environmental and human cost – provides no incentive to stop overconsumption and waste of metals in the Global North. Scarcity must be seen as the key to innovation and creativity.

Environmental destruction and the human impacts of mining can be relegated to the past. The social and technological solutions to make it a reality already exist: an end to technological, psychological and planned obsolescence, reparability, long-life product cycles, and built-in circular design for easy and economical disassembly of components for reuse and recycling.

The EU should also devise a much more ambitious Green Deal that aims for “growth without economic growth”, as the European Environmental Agency (EEA) recommends.

For example, car-sharing – combined with much better provisions for walking, cycling and public transport – can minimise Europe’s car fleet, substantially reducing the demand for metals to turn the car fleet electric.

This is the sort of enormous potential for reducing resource demand that the EU should target, rather than continuing to embrace the old paradigm of raw materials extraction.

Most importantly, it means letting go of the ‘eternal economic growth’ paradigm and creating societies and economies that focus on well-being and care for the planet and people.