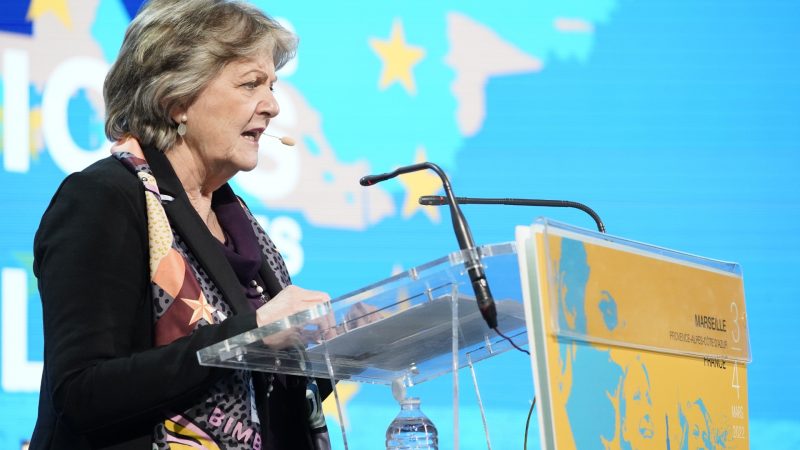 European Commissioner Elisa Ferreira is hoping to use regional catch-up funds to help with the welcoming of Ukrainian refugees. Image credit: European Committee of the Regions

As the war in Ukraine rages on, Europe braces for an unprecedented wave of refugees. European regions are expected to play a crucial role by leveraging their interconnectedness and the EU’s regional cohesion funds.

More than one million people have already fled Ukraine, according to the UNHCR, with up to five million more expected. As one of Europe’s largest countries is besieged by war, the sheer number of those fleeing to safety will be a strain on current mechanisms, but states are, for the most part, happy to help.

“We owe this solidarity to those at the front lines, to welcome the refugees,” explained Clement Beaune, the French minister for European affairs, during the 9th summit of the regions and cities held in Marseille on 3 March.

Ukrainians are entering Europe at a rapid pace. “Until yesterday, in Romania we had 120,000 refugees, 70,000 left for Western Europe, 8,000 are small children,” explained Emil Boc, the mayor of Cluj-Napoca and former prime minister of Romania.

The region’s support for Ukraine appears almost limitless, with every speaker of the opening session voicing their support for the besieged country and listing their own contributions.

“We will be supporting orphanages who will be evacuated from Ukraine,” said Aleksandra Dulkiewicz, mayor of Gdańsk and chair of the CoR Ukraine working group.

But in Poland, the number one destination country for Ukrainian refugees, the numbers are even higher. “Almost 600,000 refugees happened to come to our country, that requires a lot of undertaking, a lot of activities and taking steps,” said Wladyslaw Ortyl, president of the Polish Podkarpackie Region.

Accepting refugees has already cost his region upwards of 50 million Zloty (more than €10 million as of 3 March), Ortyl told journalists when asked by EURACTIV.

While the brunt of the budding refugee crisis is currently being borne by Ukraine’s neighbouring EU countries, namely Poland, Hungary, Slovakia, and Romania, it is expected that most European countries and regions will soon feel the impact too.

For the European regions, who have long felt underappreciated in the EU decision-making processes and are only ever consulted late into any EU initiative, the influx of refugees poses both a significant challenge and an opportunity to lobby for additional influence.

“We are the actors with the know-how, due to our proximity to the issues, able to use the funds swiftly and to the point, responding to real people’s needs,” explained Apostolos Tzitzikostas, president of the Committee of the Regions (CoR).

But to fully leverage the region’s proximity to “real” issues, “we need partnership in order to deliver these results”. He added that the CoR would have to be “upgraded” beyond its current, merely consultative role, and there must be a binding vote in certain aspects of EU decision-making.

Cohesion funds to the rescue

Part of this push for more influence is their call for more flexibility and to make ground-level decisions over the EU’s biggest pot of money: the EU cohesion policy funding, coming in at €392 billion for this European long-term budget.

Making EU money work towards the needs of Ukrainian refugees has already begun, as the European Commissioner for Cohesion Elisa Ferreira announced that she would ensure that EU cohesion funds could be used to support Ukrainian refugees.

“The current security tensions are affecting us all, but frontline states and regions will be particularly impacted. Cohesion and strong solidarity will be necessary to avoid a Europe at multiple speeds,” she said during a speech at the summit.

“This is why the commission will present new proposals to extend the 100% co-financing introduced in the CRII coronavirus investment initiative for an additional year and will adapt the cohesion rules to allow member states to support the incoming Ukraine,” she added.

“This is an economic necessity and a moral imperative.”

Specifically, that will likely mean changes for the relatively young REACT-EU facility, as Ferreira had announced an “adaptation of REACT-EU to allow the Member States to use these resources to support Ukrainian refugees” in a tweet on 1 March.

REACT-EU is part of the bloc’s recovery programme and amounts to €50.6 billion of “fresh” money, created in late 2020 to respond to the COVID-19 pandemic quickly.

The regions may even have the support of the French Council presidency in this. “Local authorities have a major role to play for this crisis,” said Jacqueline Gourault, French minister for territorial cohesion.

The French Council presidency will ensure that solidarity in Europe is as strong as possible and that many EU countries had asked to extend the cohesion fund to further the welcoming of Ukrainian refugees, she added.