The EU's plans for a 'strategic partnership' with Africa have been overtaken by the pandemic. EPA-EFE/OLIVIER HOSLET

The document proposes partnerships covering green transition; digital transformation; sustainable growth and jobs; peace and governance; and migration and mobility. The EU hopes that it marks a shift towards a less paternalist approach to its relations with African leaders.

“Africa is the European Union’s natural partner and neighbour,” said European Commission President, Ursula von der Leyen, who added that “today’s Strategy with Africa is the roadmap to move forward and bring our partnership to the next level. 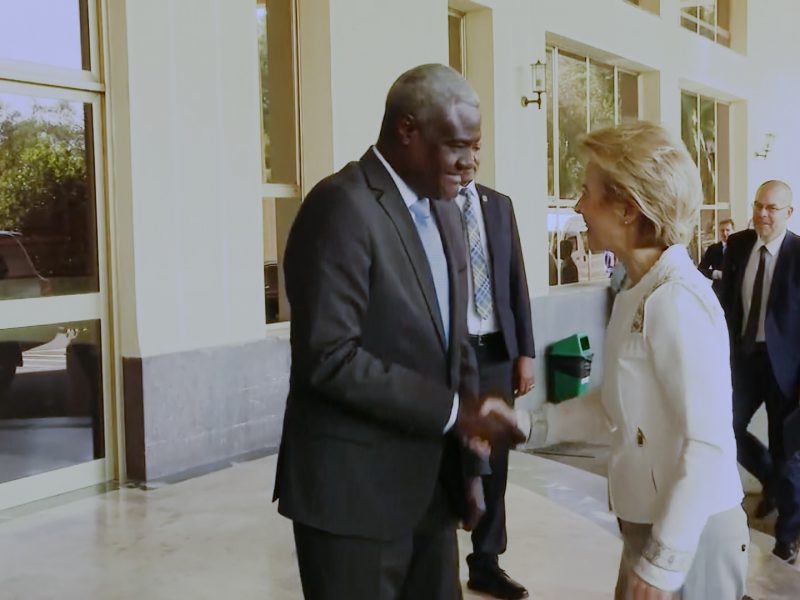 The European Commission is pursuing a renewed and ambitious relationship with the African continent. The new relationship is intended to treat Africa as an equal partner to Europe, as opposed to policy priorities being dictated to African partners. However, there …

The EU last published a ‘Strategy’ for its Africa policy back in 2005, at the heart of which were its ill-fated Economic Partnership Agreements (EPAs) with African regional blocs, only one of which has come into force.

On 27 February, the EU executive took ten of its Commissioners to an EU-AU college meeting in Addis Ababa, a sign, EU officials say, of the bloc’s intentions to intensify political co-operation with the AU.

But the EU has lost plenty of diplomatic and political ground in Africa to China and others in recent years, although the EU executive is at pains to stress that Europe remains the largest single source of foreign direct investment into the African continent.

African diplomats complain that EU conditions tied to its investment vehicles are too restrictive and that EU-Africa trade deals are skewed in favour of Europe and do not allow African countries to develop domestic industries. The result, they say, is that the vast majority of the continent’s exports to Europe are in raw commodities.

The 19-page document concedes that “Africa’s potential attracts increased interest from many players on the world scene” and that this means that this “means that Europe, with the EU and its member states working together in unison, must adapt the way it engages with Africa.”

Meanwhile, the Commission’s proposal for a Neighbourhood, Development and International Cooperation Instrument (NDICI) could provide up to €60 billion in guarantee operations to stimulate sustainable investments between 2021 and 2027, focusing primarily on Africa.

The EU has also promised to make “political, technical and financial support for the African Continental Free Trade Agreement a top priority”, and leaves open the “the long-term prospect of creating a comprehensive continent-to-continent free-trade area”.

Similarly, it also talks about proposing “to support African capacity in defence and security, using the proposed European Peace Facility”.

“There is everything to gain from reinforcing our already very strong partnership in areas such as peace and stability, poverty and inequalities, terrorism and extremism,” said EU chief diplomat Josep Borrell.

With a number of different versions of the paper having been leaked and circulated in the weeks ahead of today’s formal launch, the EU-Africa paper contained few surprises.

Even so, Emily Wigens, EU Director for ONE, a global movement campaigning to end extreme poverty and preventable disease,  described the paper as “a good first step in the right direction”.

PLATFORMA, an umbrella organisation working on local and regional international action welcomed the acknowledgment in the new strategy of the role of local authorities, “the human dimension of development.”

The organization recalled that many of he key elements of the paper -including green, economic and peace promotion aspects- often have a very strong local dimension and urged the EU to remain vigilant on good governance at local level.

However, for the moment, there is little beyond aspirations in the Communication, and it does not include any new investment or financing commitments from the EU, which remains mired in talks about its next seven-year budget that could see hefty cuts to funding for sub-Saharan Africa.

“Properly financing the partnership will be important for its success and effectiveness. That means EU leaders should also take a longer-term view on negotiations for the EU next seven-year budget, agreeing on a financing plan that looks beyond 2027 and sets this partnership up for success for decades to come,” said Wigens.

The new EU-Africa strategy also risks being complicated by the overrun to the talks on a successor to the Cotonou Agreement which expires in March.

The Cotonou pact, which covers trade and political relations between the EU and the African, Caribbean and Pacific community, including 48 African countries, has been extended to December, after negotiators failed to agree on a successor.