INFOGRAPHIC: After COP26, world is still on track for drastic global warming

As the dust settles on the COP26 climate summit, many are left wondering whether the fanfare of pledges made in Glasgow will make any tangible difference to global warming.

The COP26 UN climate conference held earlier this month saw updated and new pledges from countries all around the world to tackle climate change alongside additional goals to reduce deforestation and phase out fossil fuels.

EU climate chief Frans Timmermans highlighted the progress made since the Paris Agreement was signed in 2015, with several countries coming forward with more ambition on reducing emissions and reaching climate neutrality.

“We went into the COP on track for 2.7°C – way too much, but a lot less than the 3°C or 4°C we were headed for in Paris. And after COP for the very first time we have a shot at staying below 2°C now,” Timmermans told EU lawmakers last week.

“COP26 did not solve the climate crisis but that was also not the purpose of COP26,” Timmermans continued. “It had to bring the objectives of the Paris Agreement within reach and allow us to start implementing this deal. This it did,” he said.

But he added there is still a long way to go to meet the Paris goals, with the climate crisis requiring “constant effort and unrelenting pressure on all governments, especially the major emitters”.

Analysis of global climate pledges after Glasgow shows a significant gap between climate goals and the actions planned to get there, according to Climate Action Tracker (CAT), which analyses climate commitments.

The research gives a grim picture: the world is on course to overshoot the Paris climate goals in all but the most optimistic scenario, which assumes all announced pledges and targets are implemented in full.

In short, the actions planned to achieve the Paris goals are currently insufficient, according to the analysis, which calls this the “credibility gap”.

“No single country that we analyse has sufficient short-term policies in place to put itself on track [for] its net zero target,” warns CAT. “Even with all new Glasgow pledges for 2030, we will emit roughly twice as much in 2030 as required for 1.5°C. Therefore, all governments need to reconsider their targets,” it says.

If all the official 2030 targets are implemented, global warming would still reach 2.4°C, according to CAT. Meanwhile, staying below the 2°C threshold of the Paris Agreement would require full implementation of all the announced targets, including net zero emissions pledges.

However, CAT is very cautious about this scenario, saying that while an estimate under 2°C is an important milestone, there is only a 50/50 chance of achieving it. 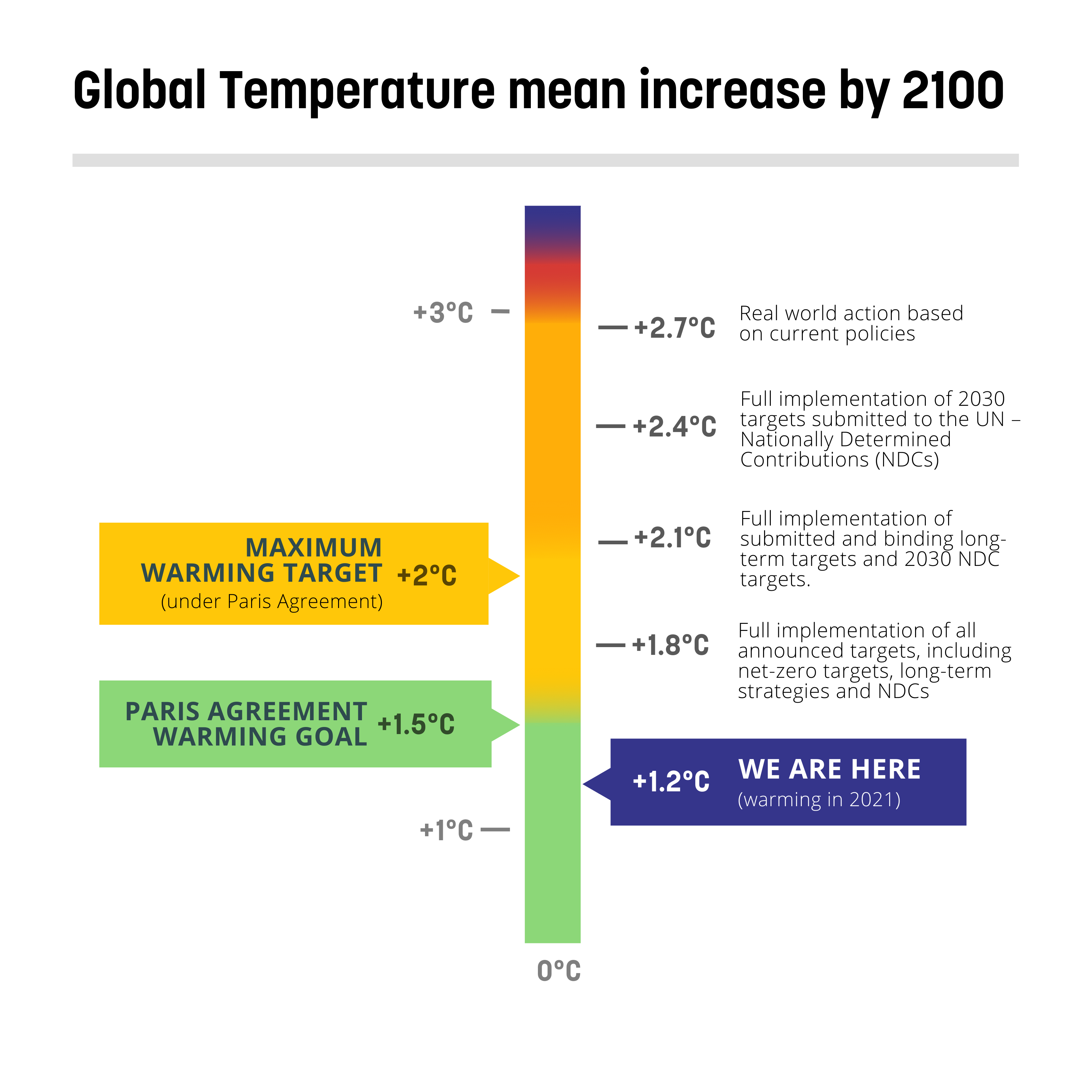 While the global outlook remains dire, there has been progress since Paris. The credibility gap between the 1.5°C pathway and governments’ 2030 pledges has been reduced by 15-17%, with the EU, China, and the US being the biggest drivers of this, according to CAT.

However, CAT’s analysis found there is still “insufficient momentum” to improve 2030 climate targets, which are vital to limiting warming this decade and getting the world on track to meet its 1.5°C goal.

And while there are several countries that have improved their ambition, including Morocco, the only country in touching distance of the 1.5°C goal, others have slipped backwards.

Some countries failed to make improvements and a couple even reduced their ambition at COP26. There are also concerns about India, which updated its ambition but with little detail, including on its coal phase-out.

For Europe, CAT also warns that while the EU’s 2050 net-zero emissions goal is one of few that is well designed, EU countries’ policies are insufficient to meet the 2030 target of reducing emissions by at least 55%.

This is partly driven by countries pushing for public funding of fossil gas infrastructure.

Alongside the updated climate ambition, COP26 saw countries sign up to several pledges, including on phasing out coal, reducing methane emissions, accelerating the transition to zero emissions cars and preventing deforestation.

Together, these pledges could close the gap between a 1.5°C pathway and governments’ 2030 targets by 9%, according to CAT.

That would mean the COP26 conference closed the emissions gap between a 1.5°C pathway and 2030 government targets by around a quarter in total.

Alongside reducing emissions, COP26 was also focused on protecting forests and highlighting the essential role they play in limiting global warming.

The UK presidency placed a strong focus on the role of nature in tackling climate change, which resulted in three pledges on forest conservation at COP26. 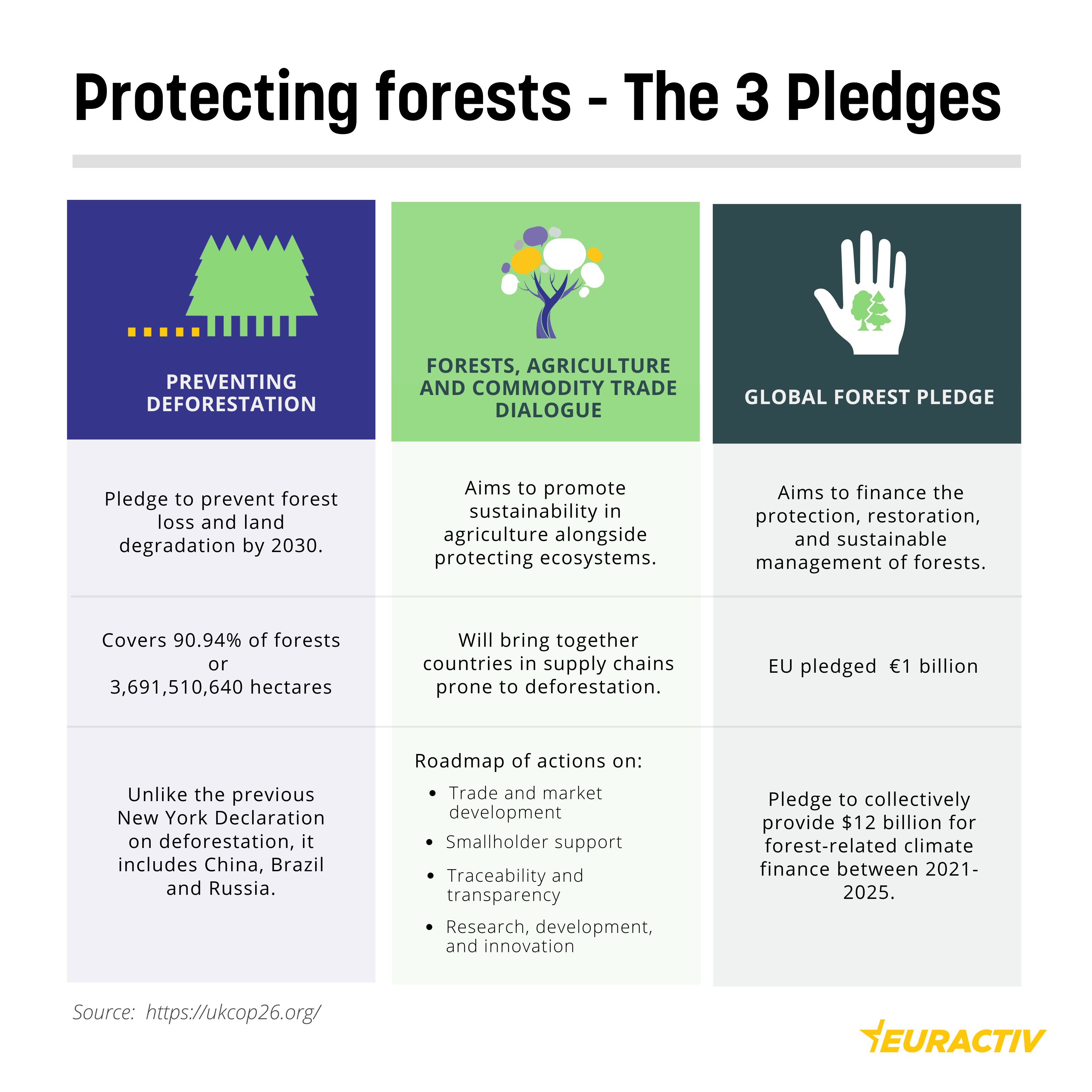 “Protecting forests, sustainably managing them and caring for the land is our shared priority. Not only because these ecosystems are essential for the stability of our climate, but also because they continue to provide livelihoods for hundreds of millions of people right around the world,” said European Commission President Ursula von der Leyen.

However, Green EU lawmaker Bas Eickhout, warned against celebrating pledges signed by over a hundred countries – as was the case for the agreement on preventing deforestation.

So while Glasgow made progress on tackling climate change, there is still a lot of work to do. Eyes are now turning to Egypt, where countries are requested to come forward with even more ambition.