UN environment experts warned that the effects of climate change are not increasing at a linear rate but are in fact accelerating. [Shutterstock]

Jan Dusík is the United Nations’ Environment Programme’s chief advisor on Arctic and Antarctica issues. He was the Czech Republic’s environment minister between 2009 and 2010 and was an official at the EU’s environment directorate before that. Thierry Lucas is the new acting head of UNEP’s Brussels office.

Both spoke to EURACTIV’s energy and environment reporter Sam Morgan.

What is the Arctic Council and what is the UN’s involvement in it?

Jan Dusík: The Arctic Council has a very robust structure, with a ministerial every two years and a rotating presidency that changes every two years [currently Finland], while senior Arctic experts meet twice a year.

One of its main objectives is to link issues that affect the Arctic to global environmental challenges. We have observer status and from UN Environment’s point of view, that means making available instruments like conventions and opening communication channels, so that everyone understands what is happening in the Arctic.

We also bring our general expertise on the environment to the table. It’s a different framework to the Antarctica Treaty, which is a legal instrument, and the Council is a cooperation mechanism. Despite all the geopolitics, Arctic ambassadors from the US, Russia, Norway etc. often work very constructively on issues.

The world’s largest marine reserve aimed at protecting the pristine wilderness of Antarctica will be created after a “momentous” agreement was finally reached Friday, with Russia dropping its long-held opposition.

Spring has arrived early in the Arctic and we even see plastic pollution reaching the far North. Are we more at a point of mitigation now for environmental concerns, rather than prevention?

JD: Prevention and mitigation come together when trying to stick to the 1.5 degrees and 2 degrees scenarios laid out by the Paris Agreement. And it is true that the effects of climate change are far more noticeable in the Polar Regions, be it weather events or weather patterns.

While we need to continue measures like reducing greenhouse gas emissions, we have to indeed accept the fact that climate change is already happening and it will have an impact. So the ice will melt, the methane will release, pollutants below the ice will come to the surface, biodiversity will be affected.

But we aren’t giving up. That’s why the Arctic Council countries are looking at resilience building and infrastructure in a changing landscape.

Thierry Lucas: One thing to remember is that this change isn’t linear. It is accelerating and there will be tipping points when it comes to factors like methane emissions. The effect on the environment and the people that live in the Arctic could be devastating.

The Polar Regions are often thought of as pristine wildernesses, where only explorers dare go, but there are indigenous populations in the Arctic at least. How badly will they be affected by the changes you mentioned?

JD: There are all sorts of people from reindeer-herders to entire cities. While populations living above the Arctic may be smaller, they are more vulnerable. They will need to adapt in order to preserve their livelihoods, which are based on a very specific economy.

And these changes are not necessarily a bad thing in that regard, as they will have access to more territories. But they could also bring disadvantages, through increased extractive industry activity and the resulting pollution.

The changing equilibrium is a real laboratory for sustainable development. Globally, people need to care about what happens in the Arctic, as it is a litmus test for the changes that are going to affect all of us.

Fake news must interfere with how you communicate these issues, be it sceptical or scaremongering content. How do you deal with that?

JD: There is enough climate science to rely on, including the IPCC’s unequivocal evidence, which is being sharpened with every cycle. While it is important to make the science more robust, it is also evident that we cannot wait until we are totally 100% sure on every aspect, as that will be far too late for us to act. Admittedly, there will be populism, on both sides of the argument: that’s the nature of politics.

TL: Our responsibility at UN Environment is to bring the issue of climate change to everyday people, to really make it clear what the impact will be, so people can really understand what is happening. It is also up to us to provide clear scenarios, so we can say: if you do this, this and this, the effect will be that, that and that.

Is that a change in tactic by the UN or is it a continuation of an existing strategy?

JD: I think the UN has consistently worked on the side of science, without oversimplifying issues. But what I think needs to change, and is changing, is the need to better communicate science in more clear language. We really need people to be able to take and step back and visualise the impact of their everyday life.

You have a vast experience of working with and within the EU institutions. Do you think they need to have a better communication strategy at the heart of what they do?

JD: A ‘blame Brussels’ mentality still exists in the member states, where whatever isn’t convenient is blamed on the EU. When it can’t explain its role, it gets a negative image. It’s something that we partly experience too when it comes to communicating the 17 Sustainable Development Goals, 169 targets and 250 indicators. It’s difficult to make such a large concept relevant to individuals but it’s essential as we are doing a public service.

TL: Social media will help us. The numbers generated by the Commission’s plastics strategy showed how much this means to people.

JD: Engaging with people is crucial. I’m often asked what the difference was between Copenhagen 2009 and Paris 2015: the answer is probably based on people seeing the solutions that are available, which the French hosts were smart to tap into.

Doom-mongering isn’t helpful. While the Paris Agreement in itself doesn’t contain enough to limit warming to 1.5 or even 2 degrees, it is a step forward. And there have been seismic shifts over the past ten years. Who would’ve thought then that China would be the leader in renewable technologies today?

Climate change is such an enormous beast, touching almost every aspect of our lives. How do you manage to deal with such a gargantuan issue?

JD: Common sense. Centuries ago people lived within their means and didn’t overexploit. That’s a simple concept that can be applied to many things in the modern world. Of course, people are still free to choose if they are empathic to the other inhabitants of this world, the only one we have, or to say that they don’t care.

TL: We also manage it by relying on storytelling. The reason the Plastics Strategy is so popular now is that it talks to people, and we have to do the same with climate change. 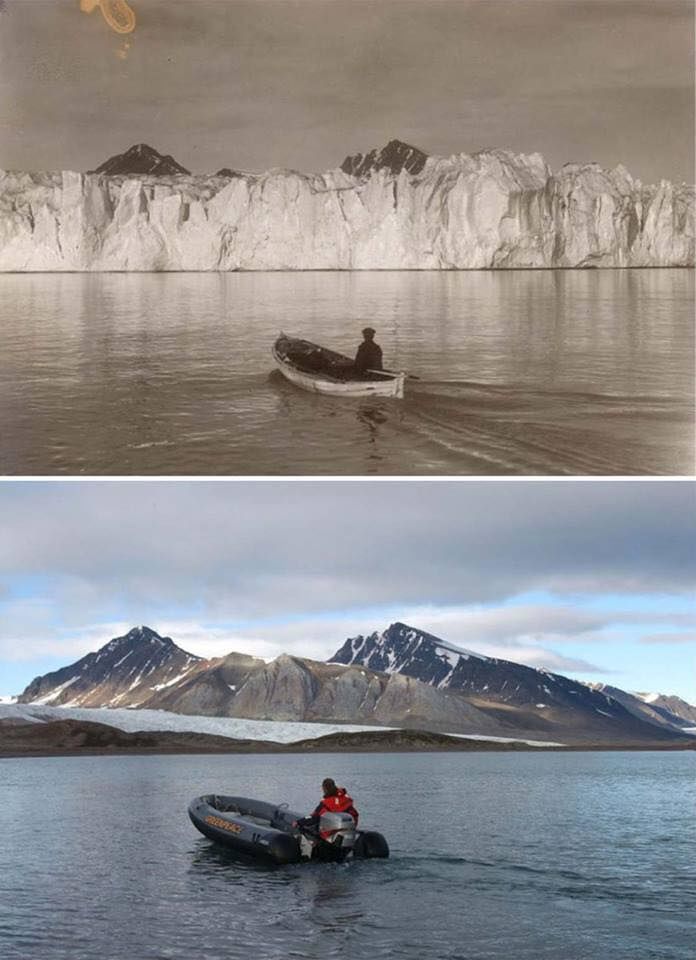 A comparison of the Arctic a century ago and currently. [Christian Åslund/ The Norwegian Polar Institute]