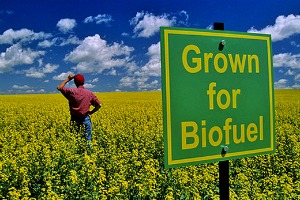 Greenhouse gas emissions from biofuels such as palm oil, soybean and rapeseed are higher than those for fossil fuels when the effects of Indirect Land Use Change (ILUC) are counted, according to leaked EU data seen by EURACTIV.

The default values assigned to the biofuels compare to those from Canada’s oil sands – also known as tar sands – according to the figures, which should be released along with long-awaited legislative proposals on biofuels in the spring.

A spokesperson for the European Commission said she could “not comment on leaked documents, such as impact assessments which have not been published.”

But industry and civil society sources described the data as credible and in line with other studies. One said it would sound a death knell for the biodiesel industry, if published.

“I think the science has proved clearly that because of the link to deforestation in places such as South East Asia, a lot of the biodiesels have significantly negative impacts on the climate,” Robbie Blake, a spokesman for Friends of the Earth, told EURACTIV.

ILUC happens when forests and wetlands are cleared to compensate for lands taken to grow biofuels elsewhere.

One recent report predicted that all of Malaysia’s tropical peatswamp forests would be destroyed by the end of the decade because of ILUC – with alarming consequences for greenhouse gas emissions – unless the expansion of palm oil production was halted.

To measure the climate impact of fuels, Brussels favours assigning default values based on a calculation of their full lifecycle emissions, hence the debate over ILUC factors and biofuels.

In its recent review of the Fuel Quality Directive, the EU proposed a default value of 107g CO2 equivalent per megajoule of fuel (CO2/mj) for oil from tar sands, as compared to 87.5g CO2/mj for crude oil, reflecting the greater environmental harm that its production causes.

Yet while advanced ‘second generation’ biofuels comfortably outperform fossil fuels in the EU’s new data, palm oil is ascribed a value of 105g, soybean 103g, rapeseed 95g, and sunflower 86g, once ILUC is factored in.

The data propose ILUC-incorporating CO2/mj values for biofuels as follows:

Isabelle Maurizi, a spokesperson for the European Biodiesel Board, told EURACTIV that data such as the leaked biofuels values, and recent reports by the EU’s Joint Research Centre, the European Environmental Agency, and the International Food Policy Research Institute, were not consistent with research in the US.

“We do not recognise the validity of the science due to discrepancies in the results. The science is not grounded yet and is still immature so we would favour incentives in policy-making rather than punitive proposals,” she said.

Any application of the leaked values could severely hamper the ability of biodiesel manufacturers to enter into the EU’s new biofuels certification plan, announced last August.

This stipulates that certification only be awarded to biofuels which emit 35% less greenhouse gas than petrol, with the figure rising to 60% from 2018.

Advanced biofuels producers believe they would meet this standard and Rob Vierhout, the secretary-general of ePURE, a renewable ethanol association, said that the EU needed “a different shade of ILUC factor.”

“If indeed the effects on land use change depend on the feedstock that they’re using, then this has to be recognised in the policy,” he told EURACTIV.

In April 2009, the EU legislated that renewable energy sources such as biofuels should make up 10% of Europe’s transportation fuels mix by 2020, and this has legal as well as financial consequences.

Nusa Urbancic, of the Transport & Environment pressure group, called for the EU to “send a clear signal to the markets about which are the future biofuels that we want.”

“We have enough biodiesel to meet the current target which is a problem for the sector, because they overinvested following a different policy signal and to some extent their investments should be protected,” she told EURACTIV.

But with scientific knowledge of the climate advantages that advanced biofuels offered “there is no excuse now not to act to resolve that [problem],” she added.

A report published by the French national auditor on 24 January found that although farmers gained from the EU’s current biofuels policy, environmental benefits were ‘questionable’ and motorists ended up having to consume more fuel and pay high prices.

Kåre Riis Nielsen, Director for European Affairs, Novozymes told EURACTIV: “There is a clear cut between those biofuels that are not able to reach the 35% greenhouse gas emissions targets if you include ILUC, and those that are. Our position is that any new policy should be based on ILUC. It should promote the best-performing biofuels and focus on making sure that they are on the market and that the advanced biofuels are promoted and deployed.”

For the European Biodiesel Board, Isabelle Maurizi said that “Biodiesel is one of the means to reach the EU’s 10% target of renewable supply in transport and we should keep in mind that is a renewable alternative to fossil fuel.”

“It is always a bit hard to do legislation based on reports with so many discrepancies,” she continued. “The International Food Policy Research Institute study which is most likely to be used by the European Commission has loopholes and shortcomings in the methodology that we have underlined. The US results are the exact opposite. Ethanol is worse than biodiesel whereas in Europe it’s the complete opposite.”

Rob Vierhout, the secretary-general of ePURE told EURACTIV that one reason for the discrepancy could be that Ethanol in the US was made from corn, unlike in Europe. “As far as I know, they don’t use sugar beet either and it is the best-performing ethanol in the world. Also many power plants in the US are also running on lignite coal, which we hardly have in Europe. So you are comparing apples with pears if you say the numbers should be the same in Europe. It’s a different feedstock and processing technology.”

Robbie Blake, the biofuels spokesman for Friends of the Earth told EURACTIV that biodiesel investors should have researched their stock portfolio more thoroughly. “If I was an investor in the biodiesel industry then I would have been betting on an industry that’s causing deforestation and is certainly not delivering the clean green fuels that it promises,” he said.

But the EU’s biofuels plans too should have been better considered, he said: “I think we can draw a clear conclusion that if member states stick to the plans they have laid out already then it's clear that it will cause an increase in greenhouse gas emissions and that’s especially the case when we rely on cheap but very damaging palm and soy oil.”

Nusa Urbancic, the biofuels expert for Transport and Environment said that it was “difficult to say” whether the EU’s biofuels policy had increased greenhouse gas emissions in the past, because of the lack of reliable monitoring data. “But these [leaked EU] figures give a sense of what will happen in the future if we don’t act,” she told EURACTIV.

“Assuming that existing demand stays as it is and increases by the amount predicted in the national action plans, most of that increase will be met by those biodiesel crops that are deemed to increase emissions compared to fossil fuels. So we can say with a lot of certainty that there is a risk that if we continue with current policies, emissions will increase instead of decrease.”

Use of biodiesel is growing steadily across the EU, which as a whole is about halfway to meeting its 10% biofuel target by 2020. Slovakia is already on the cusp of meeting the goal, followed by Austria and France.

The European Biodiesel Board, a group that promotes the industry, says the fuels derived from plants improve urban air quality, cut greenhouse gases and help farmers.

The industry organisation claims that biodiesel is low in sulphur, cuts carbon emissions by 65%-90% compared to conventional diesel, and produces far less particulate emissions that spoil the air people breathe. And unlike fossil fuels, it is biodegradable.

But after criticism that biofuels imported from developing countries were taxing land and water, and diverting attention from food to fuel crops, the EU began implementing policies that encouraged more sustainable fuel sources, such as vegetable oil waste from restaurant and industrial use.

It is an open debate about how much good biofuels do for the environment. While they emit lower carbon emissions in transport, biofuels use for home heating are a leading contributor to sulphur dioxide, a main contributor to poor urban air quality in the EU, according to a European Environment Agency’s air quality report.

Growth in the European market mainly relies on imported plant oils that are expected to surge 21% in 2011 to a record 2.42 million metric tonnes, with Argentina accounting for much of the supply followed by Indonesia.