Brussels debate: Russia’s ‘Trojan horses’ need to break away from the Kremlin 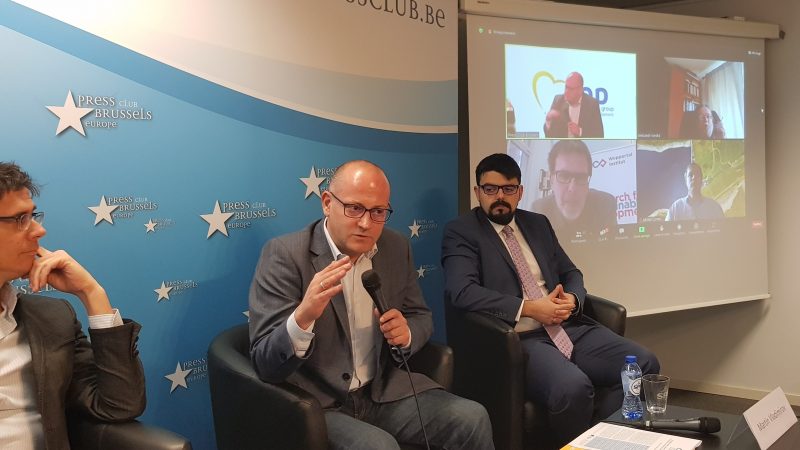 The EU executive’s plan to break away from Russian fossil fuels, REPowerEU is feeble and EU countries, too, need to be “more brave” and propose significant change, said Radan Kanev [C] at a EURACTIV Bulgaria conference [Georgi Gotev / EURACTIV]

When Bulgaria joined the European Union in 2007, the Russian ambassador to NATO and the EU named it one of the Kremlin’s “Trojan horses”, referring to the power Russia could exert on the EU through its new ties to Brussels.

Over the last few decades, Russian money and energy have flowed into Europe. Despite half-hearted attempts to diversify its energy supplies after Russia annexed Crimea in 2014, the EU has remained heavily reliant on the Kremlin and its cheap pipeline gas, which makes up around 45% of the bloc’s supply.

In the context of Russia’s aggression against Ukraine EU leaders are finally looking to break away from the grip of the Kremlin.

“With a fast transition to renewable energy sources, we could bring peace, we could make the European Union energy independent, not just from Russia, but energy independent [from] all,” said Borislav Sandov, deputy prime minister and environment minister in Bulgaria, at a Brussels conference organised by EURACTIV Bulgaria.

Happy to announce that the Deputy Prime Minister of Bulgaria for Climate Policy and Minster of Environment Mr. Borislav Sandov will make a keynote opening statement. Still not too late to book your seats, physically in Brussels or online https://t.co/ICDmgiaHkB

Or as the right-wing Czech lawmaker Alexandr Vondra put it, in light of Russia’s aggression in Ukraine, “we need to get rid of our dependence on the bastard [Putin] as soon as possible”.

Europe now faces a crippling energy crisis and the grim prospect of indirectly funding the war in Ukraine.

Russia spends $200 million every day on its war, according to Martin Vladimirov, director of the Center for the Study of Democracy’s Energy and Climate Program. It is a large price tag until you realise Europe is sending around $900 million a day for energy supplies.

Speaking at the event, Vladimirov pointed out that, over the last three decades, one trillion US dollars have left Russia and been deeply integrated into the EU economy and financial markets, giving the Kremlin a wide network of state capture partners.

Therefore, a “deep decoupling” from Russia is needed to stop the war – this would cause short term economic pain for Europe and Western society but would ensure long term security, he said.

But the Bulgarian government could be a potential Trojan horse for the Kremlin, warned Vladimirov, echoing the words of Russia’s ambassador to NATO and the EU in the late 2000s.

Since then, Bulgaria and other European countries have pushed for Russian interests, he told attendees of the event. There is now concern that some EU countries could agree to the Kremlin’s demand that energy payments should be made in Rubles, undermining Europe’s ability to renegotiate long term contracts with Gazprom, starve Russia of finance and find alternative gas supplies.

Bulgaria hasn’t made it clear whether it would accept paying in rubles for its gas. However, the Prime Minister Kiril Petkov welcomed as a victory for Bulgaria the decision at the Friday’s EU summit for joint purchases of gas.

Cutting Europe’s dependence on Russian fossil fuel is just the tip of the iceberg, said the head of the Center for the Study of Democracy Ruslan Stefanov, pointing to the state capture power the Kremlin has built. To tackle this, the focus needs to not only be on climate and energy policy, but also on anti-money laundering policy, he added.

Step carefully in alleviating the crisis

This is not the first energy crisis Europe has weathered. In the 1970s, the West was hit by an oil crisis that led to measures like people only being allowed to drive on certain days, depending on their number plate.

Since then, Europe has lived with policies to reduce consumption that make energy more expensive, said Radan Kanev, a Bulgarian MEP from the European People’s Party, who co-hosted the event.

People are fed up with having to reduce consumption, he added. This has been seen in recent protests against high energy prices in Spain and led to the Yellow Vests in France.

But Kanev warned against the narrative that Europe should bin its Green Deal and fall back on its own fossil energy supplies, saying that while some European countries with fossil reserves should increase production, “there is neither coal nor gas nor oil in Europe to address our needs and the new needs of our population”.

On the other hand, he criticised the European Commission for falling back on the Green Deal with a “business as usual” approach. The EU executive’s plan to break away from Russian fossil fuels is feeble and EU countries, too, need to be “more brave” and propose significant change.

For instance, he wants Europe to look again at its emissions trading system (ETS), which puts a price on carbon emitted in energy production and “needs at least temporarily a very significant redesign”.

Leaders should also be careful in introducing measures to reduce energy prices, said Timon Wehnert, head of the Berlin office at the Wuppertal Institute.

He added that Europe needs to learn to live with high energy prices, pointing to the different approaches by the US and Europe during the 1970s oil crisis. The US worked to bring down energy prices and Europe focused on energy efficiency measures. This put Europe in a much stronger position when the second crisis hit, he said.

EU leaders should also not be distracted by other crises when dealing with Russia in its policy, said Michel Cornet, a partner at CLIMACT.

There is no easy path out of the energy crisis, but long term measures like more renewable energy and energy efficiency measures, would help lower prices and boost EU independence.

“The endgame is quite clear, that we want to go to a fully renewable energy system,” Green lawmaker Bas Eickhout said at the debate.

The Bulgarian government is already working on increasing its renewable energy. The country has a lot of projects waiting for the green light and Sofia is changing legislation to allow faster permitting.

“We have to open the door for only investments in renewable sectors, for all the potential, not just for producing energy, but for energy efficiency, for energy storage and for small grids, because these are also part of the solution that we have to find,” said Sandov.

Indeed, while central and eastern countries are often more reliant on Russia when it comes to gas supplies, they are in a better position to simply skip gas in the energy transition, said Maria Pastukhova from the think tank E3G.

Bulgaria is particularly well placed to transition to a low carbon economy because of its expertise in air conditioning and computer programming, giving it a lead in technology like smart grids and energy efficiency, she added.

Out of the frying pan, into the fire

But in rushing away from Russian energy, Europe should be careful not to run headlong into dependencies on other countries, according to several of the speakers.

For instance, Eickhout criticised a deal struck between the EU and US to increase supplies of LNG from the US by an additional 15 billion cubic metres (bcm) this year with the aim to increase this to 50 bcm.

“If you take the plan seriously … it just shows you that we are now so desperately grasping for gas all over the world that we might lock ourselves into an LNG dependency, which is bad for the climate, which is bad for energy security,” he warned.

Instead, he wants an EU approach to energy policy. “27 member states still think that they are more powerful if they do negotiations with third countries on their own and that is our biggest weakness and that’s where people like Putin are profiting,” he added.

Eickhout criticised countries like France, which has blocked the connection of the Iberian peninsula to the European energy market, Germany and the Netherlands, which pushed for Nord Stream 2 and Bulgaria, which he said took advantage of its geographical position to have cheap pipeline gas.

Kanev disagreed over the reasons for Bulgaria’s heavy reliance on Russian gas, saying that Bulgarian gas could be more expensive than average sometimes, but added that an energy union framework is already there.

The EU needs to speed up the rollout of renewable energy and energy efficiency measures, but should be cautious around supply and a possible shortage of things like solar panels and raw materials, warned Vondra.

To address this, Stefanov suggested an EU-wide instrument to address Europe’s dependencies and ensure a secure supply.

“What we need, though, is to develop the tools to actually manage effectively, actively beforehand the sequencing of our energy and climate security policies,” he explained.

But, while there is no chance of energy independence for Europe, reliance on other countries for parts for renewable energy technology is far less dangerous than relying on the supply of fossil fuels, argued Eickhout.

One response to “Brussels debate: Russia’s ‘Trojan horses’ need to break away from the Kremlin”