China, US announce deal to accelerate climate action this decade 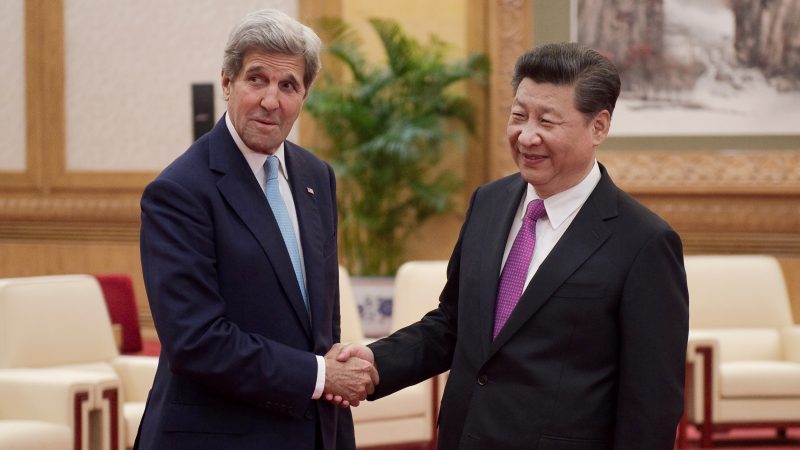 File photo. US Secretary of State John Kerry (L) shakes hands with China's President Xi Jinping (R) at the end of the eighth round of US-China Strategic and Economic Dialogue at the Great Hall of the People in Beijing, China, 07 June 2016. [EPA/NICOLAS ASFOURI]

China and the US have announced a deal to strengthen their cooperation on climate action and accelerate emissions cuts this decade, in a boost to the COP26 climate conference in Glasgow, UK. EURACTIV’s media partner Climate Home News reports.

The world’s two biggest emitters released a surprise joint statement on Wednesday evening setting out their intention to “seize on this critical moment to engage in expanded individual and combined efforts to accelerate the transition to a global net zero economy”.

An unformatted draft was hastily shared through climate communications networks on a googledoc before the official version was published by the US state department and Chinese environment ministry websites.

Under the deal, both sides promised to act in this “decisive decade” to reduce emissions and keep the goals of the Paris Agreement to limit temperature rise “well below 2C” and pursue efforts for 1.5C “within reach”.

They recognised that “there remains a significant gap” between current national carbon-cutting pledges and policies and what is needed to achieve the Paris goals.

“The two sides stress the vital importance of closing that gap as soon as possible, particularly through stepped-up efforts,” it reads.

I welcome today's agreement between China and the USA to work together to take more ambitious #ClimateAction in this decade.

Tackling the climate crisis requires international collaboration and solidarity, and this is an important step in the right direction. #COP26

Xie told media: “In the area of climate change there is more agreement between China and the US than divergence, making it an area with huge potential for our cooperation.

“We are two days away from the end of the Glasgow COP so we hope that this declaration can make a China-US contribution to the success of COP26.”

Kerry said: “This declaration is a step that we can build on in order to close the [ambition] gap. Every step matters right now. We have a long journey ahead of us. We have to mitigate faster, have to cut methane emissions faster, continue to raise ambition and most of all we have to take action in order to keep 1.5C alive.”

The two sides have been discussing the deal “for months,” said Kerry. They held more than 30 virtual meetings and met in Shanghai, London and Glasgow before the agreement was reached on Wednesday afternoon.

Analysts welcomed the signs of cooperation amid what has been a strained bilateral relationship in recent years.

The two nations struck a deal in 2014 that was widely seen as critical to the success of the Paris climate summit but have since clashed over issues like trade and human rights.

Thom Woodroofe, a senior advisor at the Asian Society, said that while Wednesday’s deal was not such a “gamechanger”, “in many ways it’s just as much of a step forward given the geopolitical state of the relationship”.

“It means the intense level of US-China dialogue on climate can now begin to translate into cooperation,” he said.

Bernice Lee, a China expert at think tank Chatham House, said the joint statement “could only be good news”. “Details remain patchy but this declaration should dissolve any fears that US-China tensions will stand in the way of success at COP26,” she said.

But “the real test for Washington and Beijing is how hard they push for a 1.5C-aligned deal here in Glasgow,” she added.

The document identifies cutting methane emissions as a critical area of cooperation with both sides agreeing to develop additional measures by COP27 in 2022.

While China hasn’t signed the pledge, it committed to develop “a comprehensive and ambitious” national action plan on methane to cut the potent greenhouse gas’ emissions in the 2020s.

They agreed to convene a meeting in the first half of 2022 to discuss measures and standards through to reduce methane from coal, oil and gas production, the waste sectors and the agricultural sector.

Good news that US and China have found common ground on climate. This is a challenge which transcends politics. Bilateral cooperation between the two biggest global emitters should boost negotiations at #COP26. Now we must find the global deal that keeps 1.5 degrees alive.

China agreed to phase down coal consumption from 2025 to 2030 as part of its 15th five year plan – a critical document which sets the direction of economic development – and “make best efforts to accelerate this work”.

The joint statement commits both sides to further collaborate on electrification of end-use sectors, the deployment of technologies such as carbon capture and storage and air capture and the integration of renewable energy on the grid.

Both sides said they would submit their 2035 national climate targets in 2025. Discussions on the time period climate plans should cover after 2030 remains one of the last unresolved issues of the Paris Agreement rulebook, with negotiators split between favouring five and 10-year cycles.

Yamide Dagnet, of the World Resources Institute, said the move could see “a possible deal” for climate plans to cover a five-year period to be struck over the next couple of days.

This article first appeared on Climate Home News and is republished here with kind permission.