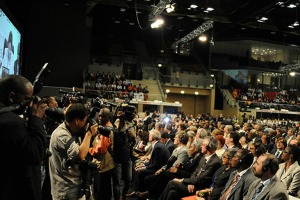 The EU will not commit to renew climate funding which runs out at the year's end ahead of talks at the Doha climate summit, which opens today (26 November). But new climate aid may be announced in the conference’s second week.

Development NGOs reacted angrily to an EU statement on 23 November which said only that in Doha, the EU would “discuss with its developing country partners how major flows of EU climate finance can continue in 2013-2014”.

"If the EU and other developed countries are serious about making climate action a reality for the period 2013-2020, they can't afford to come to Doha empty handed,” Lies Craeynest, Oxfam’s EU policy adviser told EURACTIV.

“Vague promises to increase support in developing countries won't help communities who are facing the impacts of climate change now,” she said.

Senior EU officials believe that most member states have factored climate aid into their medium term financial plans and leaders are likely to announce commitments at the conference itself.

“Normally, if it is about money, it is not the senior mandarin who will announce anything but his masters,” the EU’s chief climate negotiator Artur Runge-Metzger told a Brussels roundtable on 16 November.

Such declarations are often synched with the ebb and flow of negotiations.

“It will probably happen in the [conference’s] second week,” Runge-Metzger said, “and I don’t think this will be a pledging exercise, just what is in the drawer at the present point in time and what has been agreed to in the next year and maybe the year after”.

The UK and some other member states reportedly want to launch new initiatives that blend public and private funding sources. “I’m sure a lot of noise will be made about this in Doha,” Runge-Metzger said.

At the Copenhagen climate summit in 2009, developed countries promised to commit $100 billion a year by 2020 for climate mitigation and adaptation, with a $30 billion Fast Start Finance upfront compact for the 2010-2012 period.

The EU coughed up €7.2 billion of this total, but new research published by Oxfam today estimates that just 33% of this money was ‘new’, and only 24% was ‘additional’ to the long-standing promise to provide 0.7% of gross national incomes in overseas aid.

The vast majority of the funds were repackaged from older aid commitments, Oxfam says.

“Obviously, when the whole EU is under austerity protests, this is not exactly the time to be talking about financing,” the UNFCCC secretary general Christiana Figueres told a Green Party-organised meeting at the European Parliament on 15 November.

“However you must admit that it is also completely justified that developing countries are concerned that they don’t have enough information about the commitment of developed countries to ramp up the financial support for the $100 billion promised by 2020,” she said.

Before financial aid, the EU appears to be prioritising the need to agree a new global climate agreement by 2015 to replace the Kyoto Protocol, which also expires on 1 January 2013.

“Doha must build on the breakthrough we achieved in Durban and make progress in preparation of the 2015 legally binding global climate agreement,” the EU’s Climate Commissioner Connie Hedegaard said.

“Equally important will be agreeing on further measures to reduce emissions so we can stay below a 2°C increase.”

An extension of Kyoto, involving a new round of emissions reductions could be agreed by parties such as the EU, Australia and Ukraine – covering 12-14% of global emissions.

But big developed nations such as the US, Canada, Russia, and Japan will not sign up to a new treaty, partly because they want emerging economies such as China and India to shoulder bigger emissions reduction responsibilities.

There are also divisions within the Kyoto-friendly nations, with the EU proposing an eight-year extension to the protocol and developing world nations favouring a longer deal.

Figueres called on the EU to resolve the issue, when she addressed the European parliament. “I see a solution there in the making, particularly if the EU comes to Doha with a very concrete proposal for how during their expected eight-year commitment period, they will raise ambitions,” she said.

The UNFCCC was also expecting the EU to make “a very clear statement about the importance of markets” in large-scale and cost-effective climate mitigation, Figueres added.

“We are depending on the EU to come forward,” she said. “The EU holds the answer in its hands.”

The 'Copenhagen Accord', agreed at in the Danish capital in December 2009, included a pledge by developed countries to raise $100 billion per year by 2020 to help poor countries fight climate change and adapt to its inevitable consequences.

Meeting the following year in Cancún, the 190 nations involved in the UN talks made progress on the establishment of a Green Climate Fund to deliver climate cash to developing countries.