COP26 draft calls for tougher emissions pledges by next year

By Adam Morton and Fiona Harvey | The Guardian 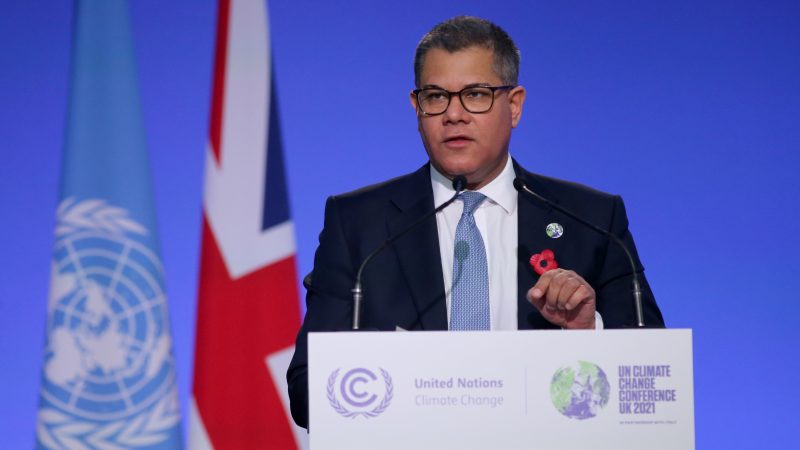 A draft of the COP26 negotiation outcome published overnight urges countries to strengthen their 2030 greenhouse gas emissions targets by the end of next year in a recognition of the yawning gap between current pledges and the landmark 2015 Paris Agreement. EURACTIV’s media partner, The Guardian, reports.

The text, released by the COP26 president, Alok Sharma, called on all countries to increase their short-term commitments in 2022, which would be a step forward. It also asks them to agree to an annual high-level ministerial round table focused on raising ambition further starting next November.

However, it refers to the Paris temperature goal which could limit temperature rises to 2°C, rather than the more ambitious goal of 1.5°C that many countries and campaigners were hoping for.

It followed widespread dismay on Tuesday after a projection by Climate Action Tracker found, based on analysis of countries’ current 2030 targets, that global heating was likely to soar to 2.4°C above pre-industrial levels. Scientists warn a temperature rise on the scale would lead to devastation across the globe due to worsening heatwaves, floods, drought, storms and sea-level rise.

The draft, released before dawn on Wednesday and to be negotiated by countries over the final three days, is likely to form the basis for the main outcome at the summit, which aims to clarify and build on the Paris Agreement.

It proposed that countries agree to accelerate the phasing out of coal and subsidies for fossil fuels – a potential first acknowledgement of fossil fuels’ central role in the climate crisis in a UN agreement – and called on all developed countries to at least double climate finance commitments to help those worst affected across the globe.

On the pace of cuts, it recognised the advice of the Intergovernmental Panel on Climate Change that limiting global heating to 1.5°C by 2100 would require “meaningful and effective action” by all countries in this “critical decade” to achieve a 45% cut in global emissions by 2030 on the way to net zero by “around mid-century”. The draft “noted with serious concern” that based on current commitments emissions were instead on track to rise 13.7% by 2030.

Observers said the draft fell substantially short of what was needed. Jennifer Morgan, executive director of Greenpeace International, said it was a little more than an agreement to “all cross our fingers and hope for the best”, and said stronger action was needed on finance and adaptation, including “real numbers in the hundreds of billions”.

“It’s a polite request that countries maybe, possibly, do more next year,” she said. “That’s not good enough, and the negotiators shouldn’t even think about leaving this city until they’ve agreed to a deal that meets the moment. Because most assuredly, this one does not.

“We’ve just had a landmark study showing we’re heading for 2.4°C of warming. The job of this conference was always to get that number down to 1.5°C, but with this text world leaders are punting it to next year. If this is the best they can come up with then it’s no wonder kids today are furious at them.”

Bill Hare, the chief executive of Climate Analytics, one of the organisations behind CAT, said the draft did not recognise the urgency needed to close the 2030 emissions gap.

He said the COP president should have called out all countries that had not submitted targets in line with the 1.5°C goal of the Paris Agreement and cautioned that the current wording implied further action could be pushed out until 2023.

“The UN secretary general should be invited to convene world leaders at the end of 2022 specifically to address closing the 2030 mitigation and finance gap,” he said. “If this is pushed off until 2023 then the process will really only be addressed in commitment for 2035 – nearly 15 years away – leaving the massive gas in 2030 unaddressed.”

UK prime minister, Boris Johnson, who is preparing to return to Glasgow for a day on Wednesday, has urged countries to “pull out all the stops” as the summit enters its final days.

> The draft COP26 text can be downloaded here or consulted below: