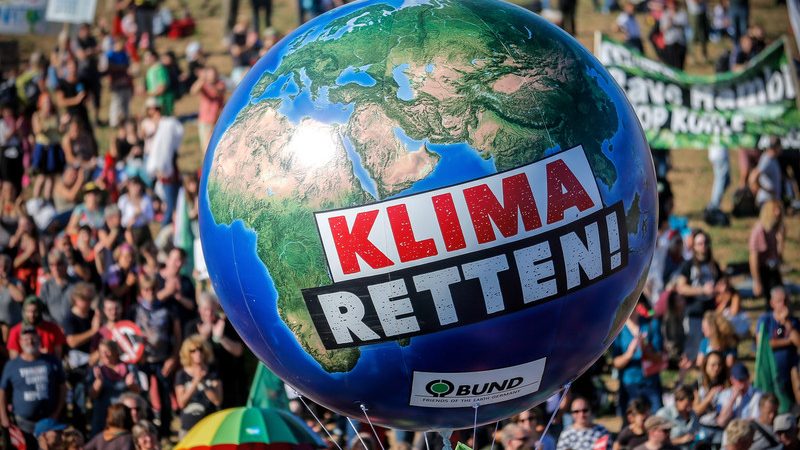 File photo. A world globe balloon is inscribed with the words 'Climate Rescue', as demonstrators show banners and balloons during a gathering around the forest Hambacher Forst to protest against its deforestation in Kerpen-Buir, Germany, 6 October 2018. [EPA-EFE/THOMAS BANNEYER]

World leaders meeting at the COP26 climate summit in Glasgow will on Tuesday (2 November) issue a multibillion-dollar pledge to end deforestation by 2030 but that date is too distant for campaigners who want action sooner to save the planet’s lungs.

According to summit hosts the British government, the pledge is backed by almost $20 billion in public and private funding and is endorsed by more than 100 leaders representing over 85% of the world’s forests, including the Amazon rainforest, Canada’s northern boreal forest and the Congo Basin rainforest.

British Prime Minister Boris Johnson said the agreement on deforestation was pivotal to the overarching ambition of limiting temperature rises to 1.5 degrees Celsius.

“These great teeming ecosystems — these cathedrals of nature — are the lungs of our planet,” he was expected to say in Glasgow, according to Downing Street.

“Forests support communities, livelihoods and food supply, and absorb the carbon we pump into the atmosphere. They are essential to our very survival,” said Johnson, who is chairing the summit.

“With today’s (Tuesday’s) unprecedented pledges, we will have a chance to end humanity’s long history as nature’s conqueror, and instead become its custodian.”

The signatories include Brazil and Russia, which have been singled out for accelerating deforestation in their territories, as well as the United States, China, Australia and France.

The government of Brazil, much criticised for its environmental policies, announced Monday at the summit that it would cut 2005-level greenhouse gas emissions in half by 2030 — up from a previous pledge of 43%.

“We are presenting a new, more ambitious climate goal,” Environment Minister Joaquim Leite announced in a message transmitted from Brasilia to Glasgow.

For his part, Indian Prime Minister Narendra Modi announced a target of net-zero emissions by 2070. 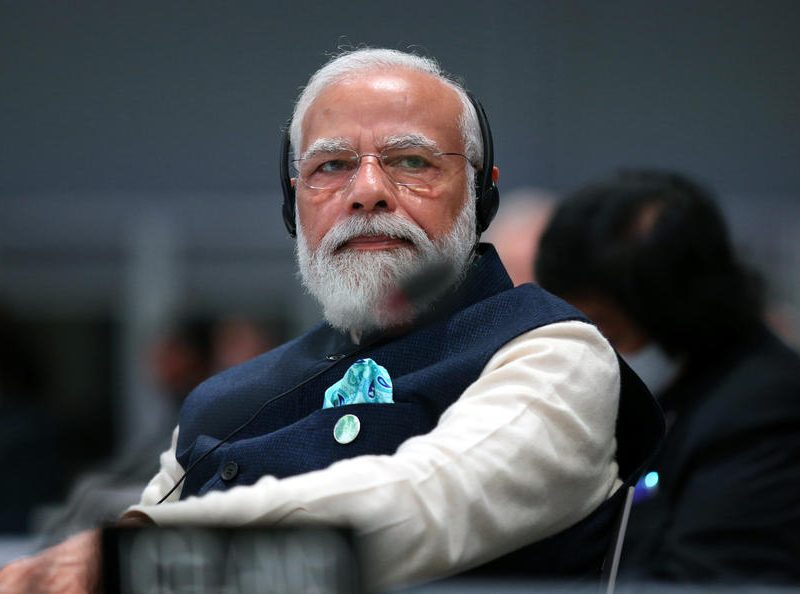 India’s prime minister used the COP26 climate talks to announce 2070 as the target for his country to reach net-zero carbon emissions, two decades beyond what scientists say is needed to avert catastrophic climate impacts.

India’s commitment was eagerly awaited, as the South Asian giant is the fourth biggest emitter of greenhouse gases, behind China, the United States and the European Union.

Swedish activist Greta Thunberg urged the leaders gathered for COP26 to act and stop their “blah blah blah” during a demonstration in Glasgow.

Almost a quarter of all man-made emissions of carbon dioxide can be attributed to land use activity such as logging, deforestation and farming.

“We are committed to protecting these critical carbon sinks and our natural capital for future generations,” he said in a UK government statement.

The summit pledge to “halt and reverse deforestation and land degradation by 2030” encompasses promises to secure the rights of indigenous peoples, and recognise “their role as forest guardians”.

While Johnson described the pledge as “unprecedented”, a UN climate gathering in New York in 2014 issued a similar declaration to halve the rate of deforestation by 2020, and end it by 2030.

However, trees continue to be cut down on an industrial scale, not least in the Amazon under the far-right government of Brazilian President Jair Bolsonaro.

Humans have already cut down half of Earth’s forests, a practice doubly harmful for the climate when CO2-sucking trees are replaced with livestock or monoculture crops.

Greenpeace criticised the Glasgow initiative for effectively giving the green light to “another decade of deforestation”.

“Indigenous peoples are calling for 80% of the Amazon to be protected by 2025, and they’re right, that’s what’s needed,” said Greenpeace Brazil executive director Carolina Pasquali.

“The climate and the natural world can’t afford this deal,” she said.

Many studies have shown that the best way of protecting forests worldwide is to keep them under the management of locals with generations of preservation knowledge.

The commitment comes a day after UN Secretary-General António Guterres harangued the gathered leaders to act to save humanity.

“Enough of brutalising biodiversity. Enough of killing ourselves with carbon. Enough of burning and drilling and mining our way deeper. We are digging our own graves.”

Our addiction to fossil fuels is pushing humanity to the brink. It’s time to say: enough.

Enough killing ourselves with carbon.

We are digging our own graves. pic.twitter.com/7cS2L59Tub

Summit host Johnson warned of the “uncontainable” anger of the younger generations if the leaders failed to act decisively on climate change.

The UN COP26 conference will continue for another two weeks to try to craft national plans to forestall the most devastating impacts of global warming.