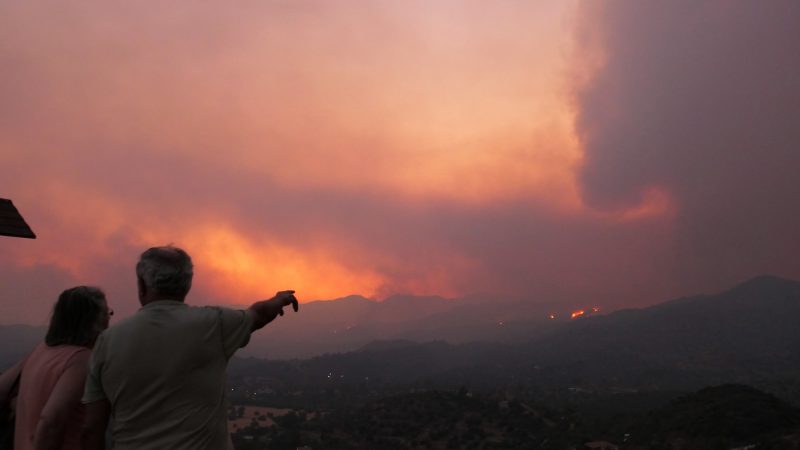 People of a village look toward the fire in the Larnaca mountain region, Cyprus, 3 July 2021. The European Commission has mobilized the rescEU system, which tackles natural disasters, to Cyprus after huge fires broke out in Limassol district and spread to Larnaca communities. [EPA-EFE/KATIA CHRISTODOULOU]

Cyprus said a deadly forest fire that was the worst to hit the island in decades was close to being brought under control Sunday (4 July) after water bombing by Greek and Israeli aircraft.

Fanned by strong winds, the fire broke out Saturday afternoon and swept through the southern foothills of the Troodos mountain range as the country grappled with a blistering heatwave.

The fire — described by the forestry department as the worst since the Republic of Cyprus’ establishment in 1960 — killed four Egyptian labourers, destroyed 50 homes, damaged power lines and forced the evacuation of 10 villages.

“Everything was a nightmare and pure hell here; the village was surrounded by fire,” said Akis Giorgiou, 45, from the hamlet of Arakapas.

By late Sunday afternoon, the government reported a “reduction of (fire) outbreaks” thanks to “effective water drops by Greek and Israeli aircraft”.

The Egyptian government said the four dead were farm workers from the North African country, while Nicosia vowed in a tweet to “stand by the victims’ families… offering every support”.

“It is a tragedy,” President Nicos Anastasiades said on Twitter, describing it as “the largest fire since 1974”, the year when the island was divided after Turkey occupied its northern third.

The blaze destroyed 55 square kilometres (21 square miles) of forest and farmland, according to the forestry department.

Interior Minister Nicos Nouris said the four Egyptians’ charred bodies were found outside the village of Odos in Larnaca district.

Their burnt-out vehicle was found at the bottom of a ravine and the four bodies some 600 metres (yards) away. A policeman at the scene told AFP that they appeared to have fled the vehicle on foot but run in the direction of the wind-fanned flames, in a doomed attempt to escape.

In areas where the fire had been tamed, grey ash replaced yellowed scrub as far as the eye could see.

A 67-year-old farmer was arrested and remanded in custody on suspicion of causing the blaze, a charge he denied.

Police said an eyewitness had seen him leaving the village of Arakapas in his car at the same time the fire started there. He could face charges of recklessly causing the four deaths.

Anastasiades visited a crisis management centre in the village of Vavatsinia, a few kilometres (miles) east of the blaze, on Sunday morning, the CNA news agency reported.

The Greek Cypriot leader said the blaze had appeared largely contained but could resurge.

Firefighters were seen along the road leading to Vavatsinia and several helicopters hovered above the fire as thick grey smoke obscured the sky.

Janez Lenarcic, European Commissioner for Crisis Management, said on Saturday its “aerial firefighting capacity” had been mobilised, with Italy and Greece sending planes to help.

After a huge fire broke out in #Cyprus Limassol district, our Emergency and Response Coordination Centre invited #Greece & #Italy to mobilise the #rescEU aerial firefighting capacity.

We remain in close contact with 🇨🇾 authorities. #EUCivPro https://t.co/dCSqPZIpLO

Britain, which has military bases on Cyprus, deployed two search and rescue helicopters.

A government spokeswoman said later that the situation was close to being brought under control.

“The effort continues as complacency is not allowed until the final extinguishing of all fires,” she said, adding electricity supplies were being gradually restored.

“Instructions have already been given for people to return where homes are deemed safe.”

Teams would be deployed immediately to start evaluating and registering damaged homes and property for compensation, she added.

“We hope that as winds die down and temperatures fall in the evening, the situation will be better, and hopefully by (Monday) morning, the fire will be under control,” forestry department chief Charalambos Alexandrou said, quoted by CNA.

Cyprus has experienced extended heatwaves and periods of drought in recent years.

In the past few days, the temperature has topped 40 degrees Celsius (104 degrees Fahrenheit) inland and there has been very little rain since mid-April.