Barack Obama’s departure from the White House left a climate leadership gap, one that Europe is still trying to fill. [European Commission]

Europe has been one of the driving forces behind the quest to make the Paris Agreement a reality. But how serious is the EU about the landmark deal and what is Brussels doing in its own backyard to keep global temperature increase ‘well below 2 degrees Celsius’?

Since US President Donald Trump decided last year to haul the United States out of the Paris Agreement as soon as legally possible, Europe has been keen to reassert its leadership position on climate change, given the vacuum left by the Barack Obama White House.

That ambition survived its first acid test in September 2016, when the European Parliament approved the bloc’s ratification of the agreement, which in turn tipped the climate deal over the necessary benchmark to enter into force.

EU leaders have since met with Chinese and Canadian counterparts under the auspices of the Ministerial on Climate Action (MoCA) in order to “galvanise” increased emission reduction pledges and react to increasing concerns among the general public.

That leadership quest was reiterated at the Global Climate Action Summit in San Francisco on 15 September, when a delegation from the Parliament’s environment committee called on the EU to “fill the leadership gap”.

MEP Francesc Gambús said the gap “works as a drag on the UNFCCC process”, adding that if the EU does not “step up to the plate” then “no one else will”.

In a report adopted in June, the European Parliament also insisted that the EU should speak with a “single and unified voice” when it comes to global warming and other international issues.

In order to export climate diplomacy beyond the EU’s borders, lawmakers also said that ratification and implementation of the climate accord should be a pre-requisite for future trade deals, although critics have already pointed out that measuring implementation is problematic.

Trump’s lack of time for climate action is set to scupper any remaining hopes of Brussels and Washington striking large-scale commercial deals, while fledgeling talks with Australia could come to nothing given the latter’s roll-back on ambition.

Brazil, one of the world’s largest emitters, could also follow Trump’s course of action, as the frontrunner in its presidential elections this weekend, Jair Bolsonaro, has threatened to scrap the climate deal.

Home to the world’s largest rainforest, Brazil is meant to host 2019’s edition of the COP, although its uncertain political future means that it is still to be confirmed officially.

In terms of policy, EU lawmakers have had their hands full finalising important elements of the European Commission’s raft of clean energy laws. Earlier this year, negotiators signed off on new rules for renewables, energy efficiency, building performance and governance.

Negotiations are still ongoing on reforming the EU’s internal electricity market but enough progress has already been made in brokering 2016’s Clean Energy Package for climate boss Miguel Arias Cañete to suggest an increase in the bloc’s emissions reduction commitment.

“Both new targets would de facto mean that the EU would be in a position to raise the level of ambition of the NDC and increase its emissions reduction target from the current 40% to slightly over 45% by 2030,” the Spanish official said at the second edition of the MoCA in June.

Cañete’s boss, Commission President Jean-Claude Juncker, said in his 12 September State of the European Union speech that upping the target to 45% is “scientifically right” and “politically necessary”.

But Juncker failed to elaborate on how this should be done, given it would need approval from the EU’s 28 heads of states and governments. He also neglected to mention ongoing efforts to draw up a long-term climate strategy for 2050, which is required under the Paris Agreement. 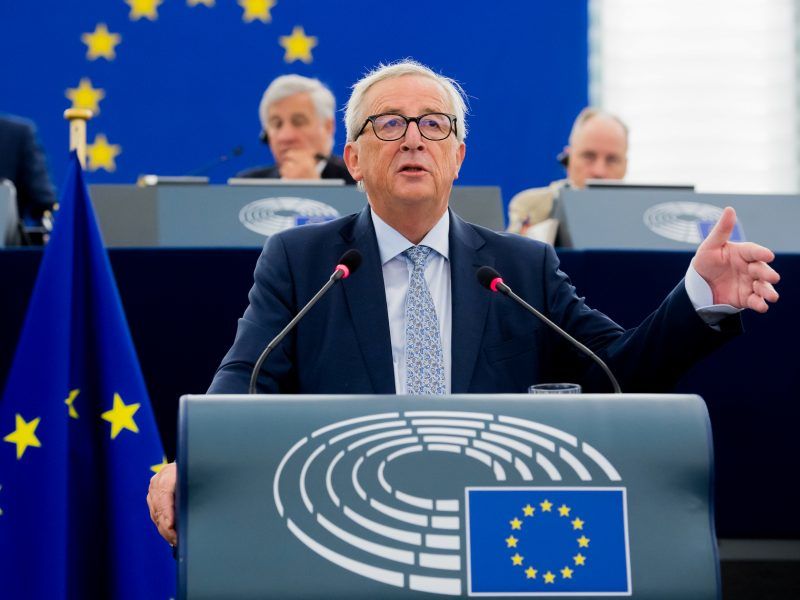 A spokesperson for the EU executive told EURACTIV that new rules adopted at EU level this year mean that emissions reductions could reach 45%.

In Brussels, climate policy observers doubt that the increase can be moved forward at all before the UN’s annual climate summit kicks off in December. Securing an agreement to increase the EU’s emissions target at the Katowice climate change conference would be a “coup”, they say.

Earlier in the year, Cañete suggested that the idea could be looked at by October’s meeting of environment ministers but any notion of formally raising the target is a non-starter, according to sources.

Meanwhile, Commission services are already using the data from the new clean energy rules to come up with a long-term strategy for 2050 and beyond, which is meant to be released before the Katowice summit.

The long-term strategy, which will be a series of milestones rather than a legal act, is meant to drag Europe onto a Paris-compliant climate trajectory, through sufficient cuts to emissions from the transport, energy, agricultural and building sectors.

In terms of what will be put on the table for discussion, sources familiar with the file say the 45% cuts will be used as a baseline for business-as-usual, with other options taking in 85%+ cuts, net-zero emissions and maybe even something near zero emissions.

Climate experts have already warned that Cañete’s push for net-zero emissions by 2050, although well-intended, overestimates how much time Europe has to mitigate climate change. NGOs like the European Environmental Bureau have called for net-zero by 2040.

‘Net-zero emissions’ – a scenario where CO2 removals balance emissions – is markedly different to ‘zero emissions’ and there are few plausible scenarios under serious consideration where Europe emits nothing by mid-century.

Instead, carbon neutrality through carbon absorption and negative emissions are presented as the most likely outcome, because it will allow EU economies to continue emitting to some extent.

It also includes carbon capture and storage, a technology that was initially touted as a potential silver bullet but which failed to pick up because of the high costs involved and a lack of incentives to make it commercially viable on a large scale.

Scientists have also been looking at steps as radical as geo-engineering but none have yet established themselves as a credible alternative.