By Fiona Harvey | EURACTIV.com in partnership with The Guardian 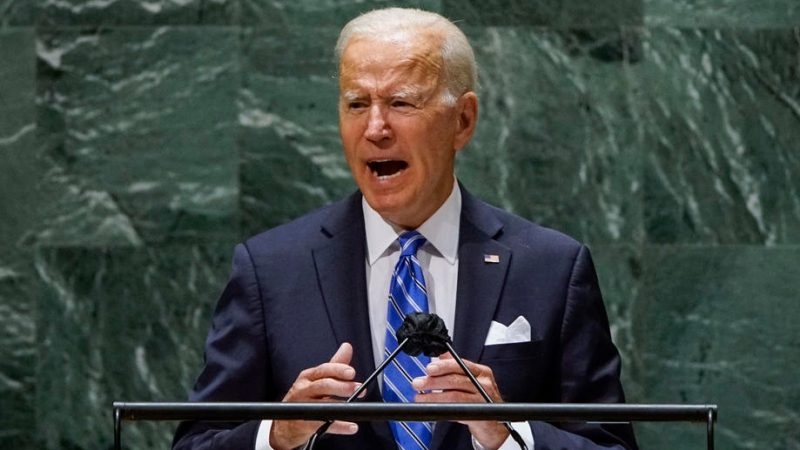 Biden, speaking to the UN general assembly in New York, said he would ask the US Congress to double to $11 billion a year by 2024, the financial assistance the US offers to developing countries to help them cut greenhouse gas emissions and cope with the impacts of extreme weather.

Climate finance is one of the biggest issues at the forthcoming COP 26 UN climate talks that will be held in Glasgow this November. Developing countries at the conference are anxious over a longstanding promise they would receive $100 billion a year from 2020 which has not yet been fulfilled.

Tina Stege, climate envoy for the Republic of the Marshall Islands, and chair of the High Ambition Coalition at the UN climate talks said: “Watching Biden’s speech today I thought – this is the announcement we’ve been waiting for. Now we’re looking to Congress to work with Biden to deliver, and to the rest of the G20 to follow suit on finance ambition.”

Simon Stiell, environment minister of Grenada, said: “The announcement from president Biden is the wind in the sails that we needed en route to COP 26. We know that this is bringing us one step closer to the delivery of the $100bn promised by donor countries – and that it will make a tangible difference in countries like mine that rely on this funding to adapt to the impacts of climate change we already feel today.”

But the US efforts were not likely to be enough, said John Nordbo, of Care International. Given that the US is the world’s biggest economy and second-biggest emitter of greenhouse gases, many hoped for more. “This updated pledge from Biden of an additional $5.7 billion is definitely a positive step and it sends a strong signal. Considering where the US was this time last year [under Donald Trump], this is a leap forward in terms of climate leadership. However, the reality is that we are still a long way from closing the gap on climate finance commitments,” he said.

Some groups have called on the US to provide more than $40 billion a year.

He added: “The climate finance gap is not just an American problem, it is a global problem. Almost all rich countries, apart from Luxembourg, Norway and Sweden, need to commit more.”

Tina Stege, climate envoy for the Republic of the Marshall Islands, and chair of the High Ambition Coalition at the UN climate talks said: “The rest of the G20 to follow suit on finance ambition.”

Climate finance has been a key sticking point at the UN talks for more than a decade. In 2009, at the fractious COP – the conference of the parties to the UN Framework Convention on Climate Change, parent treaty to the 2015 Paris climate agreement – in Copenhagen, developed countries agreed that at least $100bn a year would flow in climate finance, from public and private sources to the poor world by 2020.

However, that totemic target has yet to be reached. On Friday, a report from the Organisation for Economic Co-operation and Development (OECD) found that climate finance in 2019, the latest year for which there is accurate data, had reached only about $80 billion.

At COP 26, low-income countries want not only the reassurance that the $100 billion targets will be fulfilled, but also that negotiations will begin on a new finance regime from 2025, which would ensure they have access to the funds they need to shift their economies on to a low-carbon footing and adapt to the impacts of the climate crisis.

For the poorest developing countries, there is a further complication. The bulk of the climate finance provided to date has gone to middle-income developing countries and has been poured into projects that reduce greenhouse gas emissions, such as renewable energy. But many of these projects are profitable and could have attracted finance in any case, from private sources.

The priority for the poorest developing countries is to receive adaptation finance, which helps them build resilience and adapt their infrastructure to the effects of extreme weather that are already in evidence around the world. But funding adaptation projects – such as sea walls, early warning systems, or better infrastructure – is expensive and usually does not produce a tangible financial return, so has been shunned by donors in favour of easy wins elsewhere.

Some adaptation projects, such as restoring mangrove swamps or wetlands, can also reduce greenhouse gas emissions and protect nature, so many countries have been pinning their hopes on gaining finance for “nature-based solutions” at COP 26, but this too has been slow to arrive.

Stege, of the High Ambition Coalition, which brings together developed and developing countries in support of the Paris agreement goals, said: “Hearing the US recognise the importance of adaptation is heartening, given the calls we’ve heard from so many, including the UN secretary-general, on the need for parity between [money for emissions reduction] and adaptation financing.”

There are also concerns that some of the climate finance provided has come in the form of loans rather than grants, which can push poor countries deeper into debt, and some of it has come from existing development aid budgets, which means countries are losing out on funds for education, health, and other public goods.

Nordbo said rich countries should come up with further pledges and clearer plans before COP 26. “We are inching forward on this issue, but the problem is that, meanwhile, thousands more people are being displaced or dying,” he said. “Considering how much money these [rich] countries have made from carbon emission-creating industries, not one of them is moving fast enough.”