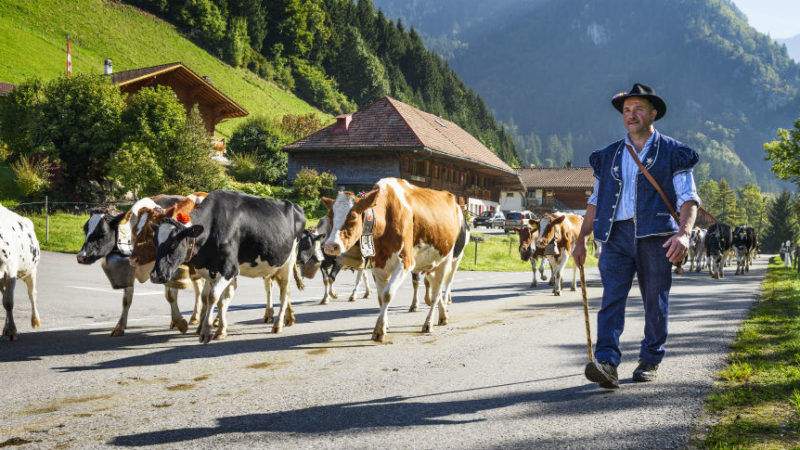 Farmers with a herd of cows during trashumance, the annual movement of people with their livestock between summer and winter pastures. Herders are descending two months earlier than normal due to drought. [ventudusud/Shutterstock]

Throughout the Alpine arc, transhumance is a centuries-old tradition whereby herders lead their animals to the Alpine plateaus in the beginning of summer and return to the valleys in the fall. This allows herds to graze in high pastures in the summer and produce hay for the winter, and led to the production of many “alpine” quality cheese protected by the European DOP labeling scheme.

To keep this tradition alive, mountain herders receive financial incentives within the framework of the European Common Agricultural Policy (CAP) and the Rural Development Plan (RDP) but have to pasture a minimum amount of adult cows per hectare at high altitudes for at least 60 days per year, among other requirements.

Since the 2003 CAP reform decoupled payments from production levels and introduced the opportunity to trade entitlements separately from land, the value of entitlements grew exponentially, sometimes above €1000/hectare.

Speculators became interested in acquiring large swathes of land where they could “land” their high-value entitlements and request CAP payments.

Alpine pastures, measuring hundreds of hectares, were a prime option. Public auctions and saw their value rise tenfold, from €20/30 of rent per year to €200/300, crowding out real herders.

They had to resort to sub-renting mountain pastures, while speculators pocketed CAP payments.

In 2015, the Italian government discovered extensive fraud, and confiscated €600,000 worth of assets, equivalent to the amounts illegally obtained by fraudsters during the years 2010-2015.

Since then, the Italian agricultural payments agency, AGEA, which is in charge of allocating European Union payments to farmers, instituted the requirement to own at least 70% of the herd, and the region of Piedmont – where the fraud was discovered – raised the number of cattle per hectare required to access European funds to 0.1, so as to discourage speculators who kept a minimum amount of animals or resorted to sub-renting pastures only to secure payments.

But these stricter requirements are proving incompatible with the heat wave experienced this summer. Rainfall has been declining for the past ten years, water sources are drying up and grass-fed animals risk starvation.

Herders must choose to descend earlier and forego CAPpayments of up to €100,000, or wait it out in the Alps but endanger their animals.

“We are faced with a dire choice: to come down or not?” Chris Dalmasso, chair of the mountain herders’ association AdiAlpi told EURACTIV.com.

“Many are coming down already, unable to meet the time and cattle-per-hectare requirements,” he said.

The payments under the Rural Development Plan (RDP) have even stricter thresholds: to qualify, herders must sign up for a five-year scheme where they rotate their pastures to allow for the reproduction of quality feed and have to herd twice the cattle per hectares required by CAP payments.

But if they’re forced down by drought, they would have to reimburse the amounts perceived so far.

“These herders are even more negatively affected. They are in the second year of the scheme. If they come down, they will have to reimburse last year payments as well as renounce the ones for the coming four years. Many counted on this income for investments and will go out of business”.

Dalmasso also criticized the measures against speculation: “The measure [to own at least 70% of the herd] was welcome but came too late. It should have been implemented ten years ago when we asked for it. Now speculators made so much money thanks to CAP that they can easily buy 100 animals and participate in auctions.”

Given the heatwave, AdiAlpi requested that herders be allowed to descend from the mountains without losing out on EU funding, but so far the region has not granted this.

Coldiretti, the Italian farmers’ union, announced that more than half of Italy’s regions have already declared or are preparing to declare a state of natural disaster because of the drought, which has already caused €2 billion losses to Italian agriculture.

In July, the Italian agriculture ministry asked the EU to anticipate CAP payments to help farmers.

A Commission spokesperson said: “This year, we will increase for Italy and other Member States the allowed advance payment rate to be made as of 16 October for 70% of what a farmer is entitled to receive.”

This will give respite to farmers after the dryest summer in 60 years. But for alpine herders who can’t meet CAP requirements the summer is still long.