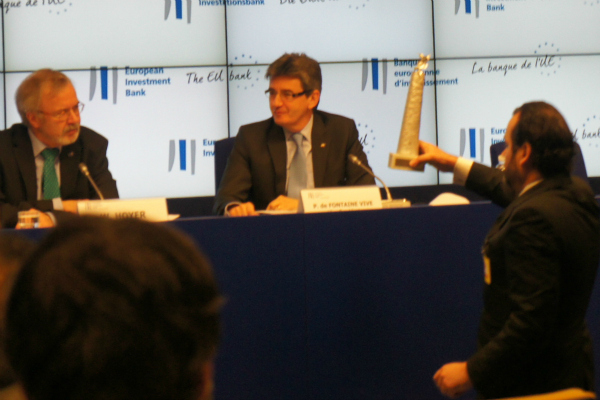 An annual European Investment Bank (EIB) conference in Brussels on 28 February was eclipsed by colourful protests against a controversial EIB-funded Slovenian coal plant, described by a senior bank source as “one of those projects that tends to haunt you”.

The crisis-plagued 600 MW lignite TEŠ 6 coal plant in the northern town of Šoštanj is in line to receive €440 million of EIB loan guarantees – and another €200 million from the European Bank for Reconstruction and Development.

But disbursement of the money has been delayed by ongoing corruption and fraud inquiries, as well as environmental concerns that the plant will sabotage any hope of Slovenia decarbonising by 2050.

“With the benefit of hindsight, the project has raised many issues which have taken up a lot of time when we would rather be doing other things,” an EIB source told EURACTIV. The Šoštanj project had been “struggling along for years,” he said.

A bearded protestor in a suit illustrated the Lazarus-style nature of the Šoštanj debate at the conference, interrupting EIB President Werner Hoyer’s speech to present him with a silver smokestack chimney award “to honour your commitment to divest from coal, and finally commit to real action on climate change.”

The day before, a fake EIB ‘press release’, picked up by several news agencies, had announced the bank’s divestment from coal in favour of clean energy.

That led to strong words from the bank. “The content of the release is incorrect and unauthorised and the Bank will consider legal action against this misuse of the Bank’s identity,” an official press statement said.

It later emerged that the stunts had been organised by the ‘Yes Lab’, a protest subfranchise of the famous Yes Men.

A 'financial agent of the EU'

The EIB sees itself as a “financial agent of the EU in the fight climate change”, as Hoyer told the conference. The bank is one of the largest funders of European renewable and energy efficiency projects, and is engaged in an energy lending policy review, that will report back this summer.

But environmentalists in the Counterbalance-EIB coalition complain that until this year, most of the bank’s energy lending funds had gone to fossil fuel projects, mostly natural gas.

In December 2011, an EIB spokesman told EURACTIV that since 2007, fossil fuel fields, power stations and infrastructure had received €15 billion compared to €14.8 billion for renewables. But the bank’s policy review could revise lending rules to fossil fuels industries, particularly coal.

The International Energy Agency has circled 2017 as the date beyond which any new fossil fuel projects will ‘lock in’ future carbon emissions too onerous to prevent the target of 2 degrees global warming being breached.

Asked by EURACTIV when this would become a red-line issue for the EIB, the bank’s director-general Christopher Hurst said that lending was in a “transition process”.

“Fossil fuels will phase out over time, coal will phase out more quickly than others, natural gas will have a longer time as a transition fuel and we see this as a process towards a low carbon economy,” he said. “Everything we do is in line with that.”

“It is clear that our economic and replacement criteria will eliminate some things,” he later clarified. Very few coal projects were currently being funded and these were typically “small district heating CHP schemes that are highly energy efficient,” with 15-20 year lifespans, he said.

Protestors had hoped for an announcement at the EIB conference that new coal builds would need to have a functioning carbon capture and storage (CCS) technology already installed. Experts say that the current stipulation of 'CCS-readiness' in practice just means having a large patch of land free next to the power plant.

Hurst though expected no internal EIB discussion about the issue in the near future as, if functioning CCS installations were made a condition, "the fact is there'd be no coal," he said.

In 2011, the bank’s lending to fossil fuel projects declined to one-fifth of overall energy lending – from around one-third. Between 2007 and 2012, CEE Bankwatch said EIB provided €1.88 billion for large coal-fired power plants, including:

It is the Šoštanj plant that has sparked anger at EIB lending policy, partly because of corruption allegations that are still being investigated by the Slovenian government, the EU’s anti-fraud office (OLAF), the European Commission and the EIB itself.

Last month, three MEPs wrote to Hoyer calling for a freeze on funding for Šoštanj, citing the findings of a two-year investigation by the State Commission for the Prevention of Corruption in Slovenia.

That report concluded that “the project is designed and implemented in a non- transparent manner, lacks supervision and is burdened with political and lobbying influences, and as a result there has been (and still is) a high risk of corruption and conflict of interest.”

“We still believe that it is not a bad project,” Hoyer told the press conference, but bank officials are privately pouring over details of the allegations.

“The bank has a zero tolerance for corruption so wants to make sure that this is absolutely not an issue,” Hurst told EURACTIV, adding that a decision would be taken soon.

He denied reports that the EIB’s management committee was divided on the issue. “People are genuinely concerned and they want to clarify the basis of concern so that it can be eliminated,” he said.

The bank believes that the project will remain profitable so long as carbon prices remain below a projected trajectory rising €1 a year from €30 a tonne in 2010 to €50 a tonne in 2050.

However, a study by the independent Dutch consultancy CE Delft in 2011 reported that carbon prices would have to rise to substantially higher levels if the EU’s 2050 decarbonisation goals were to be met.

The European Commission has publicly ruled that the Šoštanj plant does not breach the Environmental Impact Assessment Directive, although a separate corruption inquiry is ongoing.

Behind the scenes, though, Environment Commissioner Janez Poto?nik, is thought to oppose the financing of such coal plants, which he views as counter to the EU's 2020 objectives.

Diplomatic sources have suggested to EURACTIV that larger member states put pressure on Poto?nik, who is from Slovenia, during past furores over coal subsidies.