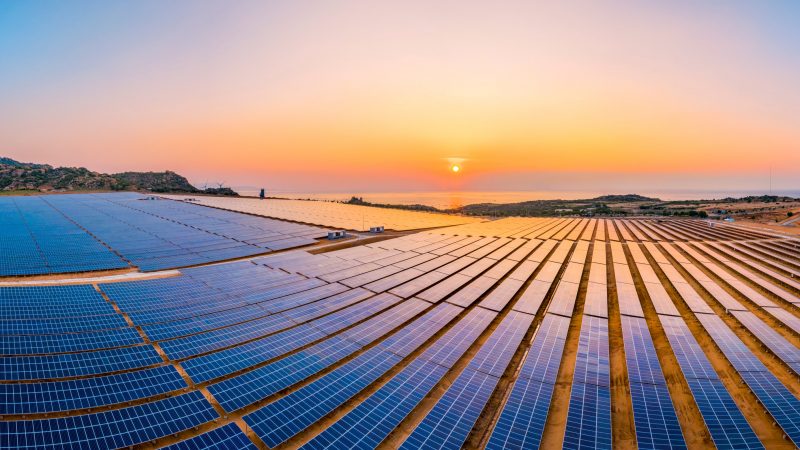 Growth in solar and wind power is predicted to surge by 1,000% and 500% globally in the next decade to reach 5 and 3 terawatts (TW) respectively, according to DNV GL's third Energy Transition Outlook. [Shutterstock]

The transition to clean energy is gaining speed, with growth in solar and wind power predicted to surge by 1,000% and 500% in the next decade to reach 5 and 3 terawatts respectively, according to DNV GL’s third Energy Transition Outlook, published on Wednesday (11 September).

Electric vehicles are expected to achieve cost parity with the internal combustion engine in the mid-2020s, the reports says, predicting that “by 2032, half the global sales of new passenger vehicles will be battery EVs,” contributing to “oil’s decline”. And growing electrification of heating in buildings and manufacturing industries will significantly improve energy efficiency, the report adds.

But none of this will be sufficient to contain the irresistible rise in global temperatures.

“The transition from fossil-based to zero-carbon is happening fast but not quickly enough to meet the Paris Agreement’s objectives to limit global warming to ‘well below 2°C’, let alone 1.5°C,” Ditlev Engel, CEO of DNV GL Energy, said in a foreword to the report.

“We need extraordinary policy action,” he wrote, calling for a comprehensive range of policies at the global level to advance renewables, new decarbonisation technologies, electric vehicles and energy efficiency.

Transition is “affordable”, governments have to do more

There are also reasons to be optimistic, according to the report, which insists that the transition to clean energy is “affordable”.

As energy use becomes more efficient and based on cheap renewables, the world will spend an ever-smaller share of GDP on energy, allowing for greater investment to accelerate the transition, said Ditlev, who is also Denmark’s Special Envoy for Climate and Energy.

Crucially, “cost is no longer a concern,” when it comes to low-carbon technologies, Ditlev told EURACTIV. For example, when banks provided loans for a wind farm a few years ago, they would be also looking at the technology risk, as part of their pricing. “And that is not something we see anymore,” he explained.

However, the pace of adoption remains sluggish.

“You can be very confident about where technology is and where it’s heading. But in order for it to thrive, you need to do much more on the policy side,” Ditlev pointed out, adding he was “concerned about the speed of implementation of these technologies”.

Renewables and energy efficiency “needs to be built into the government’s plans, otherwise it won’t happen,” he warned, referring to the Nationally Determined Contributions submitted by the signatories of the Paris Agreement.

“The best way to accelerate the transition is to make it into a market,” Ditlev said. That includes making sites available for the development of offshore wind power, for example, he said. “And we see in some countries like France that permitting can take a very long time,” he added.

Other recommendations in the report include increasing incentives for electric cars, expanding the power grid, and providing greater economic stimulus for energy efficiency measures.