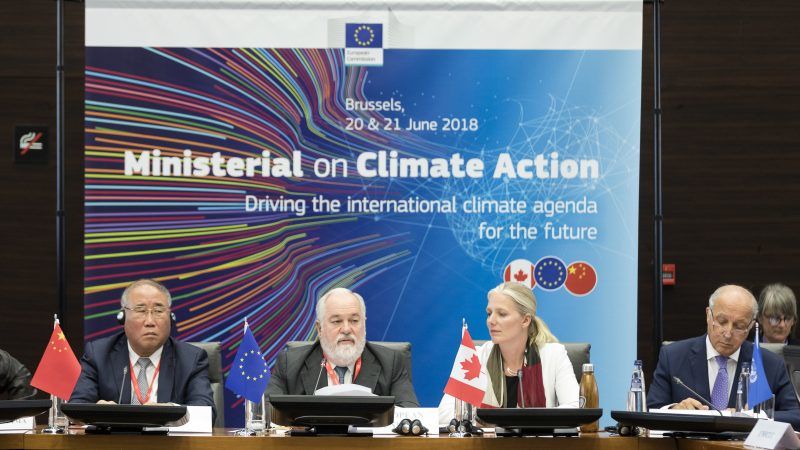 Miguel Arias Cañete, the EU’s Climate Action and Energy Commissioner, made the remarks during the 2nd Ministerial on Climate Action (MoCA) in Brussels, hosted by the EU, China and Canada.

He said new 2030 targets on renewables and energy efficiency, which were finalised earlier this month by negotiators from the EU’s three law-making institutions, mean the bloc can raise its emission reduction ambition.

Currently, the EU envisages cutting its emissions by “at least 40%” by 2030 based on 1990 levels. The pledge was made as part of the bloc’s commitment under the United Nations Paris Agreement meant to limit global warming to “well below 2 degrees Celsius”.

But clean energy targets recently brokered on renewables, energy efficiency and governance exceeded the Commission’s initial proposals and have prompted Cañete to tease an increase to the EU’s Paris pledge.

“Both new targets would de facto mean that the European Union would be in a position to raise the level of ambition of the NDC [nationally determined contributions] and increase its emissions reduction target from the current 40% to slightly over 45% by 2030,” the Spanish official told the ministerial meeting.

Formally raising that target would mean securing the support of the European Council and the Commission reportedly intends to send its refreshed proposal to the member states after the summer recess.

The agreements sealed over the past week on three laws from 2016’s Clean Energy Package mean that work can begin in earnest on a long-awaited low-carbon economy strategy for 2050, which the Commission wants to present at the end-of-year UN climate conference in Poland.

Aligning EU energy and climate policy with the obligations of the Paris deal has become the watchword of EU institutions during the recent talks to finalise the bloc’s new clean energy laws.

The new rules on energy efficiency and renewables now include review cycles that will start kicking in by 2023, in tune with the review process of the Paris goals.

But Europe does not want to be an isolated climate champion. Cañete reiterated to the ministerial meeting that the EU cannot “defend and implement the Paris goals alone”, citing the fact that the bloc is only responsible for less than 10% of global emissions.

To that end, Brussels wants to boost its climate leadership role, particularly since the Trump administration announced last year that the United States would withdraw from the Paris deal as soon as possible.

A report adopted by the European Parliament on Wednesday (20 June) aims to make sure the bloc speaks with “a single and unified voice” when it comes to global warming and other issues.

In line with Cañete’s comments later in the day, MEPs also signalled their willingness to increase the EU’s Nationally Determined Contributions (NDC) to the Paris Agreement and urged the Commission to ensure its 2050 strategy is indeed ready by the end of the year.

In order to export climate diplomacy beyond the EU’s borders, lawmakers also insisted that ratification and implementation of the climate accord should be a pre-requisite for future trade deals, although critics have already pointed out that measuring implementation is problematic.

Coinciding with World Refugee Day and ongoing tensions between member states on migration issues, the report also acknowledged the impact climate change has on the movement of people.

MEPs called on the European External Action Service and national capitals to ensure that any cooperation with third-party countries is “fully consistent” with the Paris obligations.

“By reaching out to specific countries, topics like the development of carbon markets or sustainable investments can be accelerated in particular,” co-rapporteur Jo Leinen (S&D group) said in a statement.

His colleague and fellow socialist lawmaker, Arne Lietz, said EU delegations should be granted more clout to include climate policy on their agendas and called for the issue to be prioritised in the EU’s new forthcoming multiannual budget.

The report on climate diplomacy was put together by the Parliament’s environment and foreign affairs committees and passed by a wide majority, 90 votes to 19. It will go before a full sitting of the EU Assembly in July.