Cities like Paris, where the COP21 will be held, are crucial to the success of the Energy Union project. [James Crisp]

This article is part of our special report Cities and regions against climate change.

The Energy Union is the EU’s plan to fight climate change and bolster the bloc’s resilience against shortages. It was given political impetus by the Ukraine crisis, which highlighted the EU’s dependence on Russian gas.

It is also being driven by commitments to cut emissions, and boost renewables and energy efficiency, aimed at turning the bloc into a low carbon economy. But those targets will only be monitored and met, if the European Commission drafts legislation to create a governance framework.

Planned for next year, the framework should formally recognise the importance of cities and regions in reaching the goals, environmental think tank E3G said.

“A governance system that does not recognise or support local actors is unlikely to effectively achieve the Energy Union objectives,” a report by E3G said.

“Local leaders are needed as ambassadors of the Energy Union. They are the closest to Europe’s citizens and are best placed to explain what the energy transition means for European citizens and their daily lives,” it added.

Claire Roumet, executive director of Energy Cities, said the Energy Union could bring back some legitimacy into the European project.

“It should reflect the everyday concerns of European citizens by directly involving local-elected representatives into the governance framework. As the energy system is becoming ever more decentralised, it is time for the decision-making architecture to follow suit, ” she said.

The EU’s 2030 climate and energy targets will form the basis of the bloc’s negotiation position at the UN Climate Change Conference (COP21), which begins on 30 November in Paris. Worldwide leaders will try and reach an international deal to cap global warming at no more than two degrees above pre-industrial levels at the COP21.

In October 2015, EU leaders agreed on 2030 targets of at least a 40% cut in greenhouse gas emissions, and at least a 27% increase in renewables and energy efficiency, compared to 1990 levels.

Commission Vice-President for Energy Union Maroš Šef?ovi? and Climate Commissioner Miguel Arias Cañete have both stressed the importance of cities in the fight against climate change.

Last week, Šef?ovi? said that every third visit on his Energy Union tour was with regional or municipal stakeholders. The tour was a trip around Europe before the publication of the first ever State of the Energy Union report last week.

The report said the significant emission cuts called for by the 2030 targets and the COP21 “will require further bold action at the local level.”

It mentioned the revamped Covenant of Mayors, a group of local leaders talking directly to the EU about energy policy.

The State of Energy Union report also called for a global Covenant of Mayors, which would encourage more action from local authorities.

6,500 EU cities have made climate commitments for 2020. Many cities and regions have already committed to more ambitious targets than those agreed at national and European level. The table below shows how some cities are outstripping the national commitments. 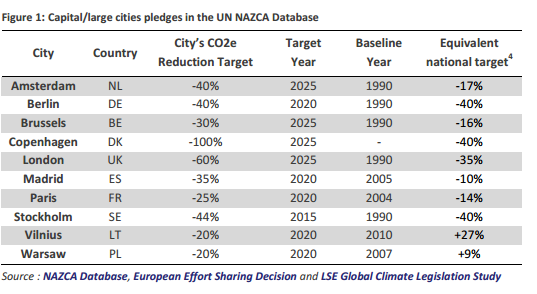 Covenant signatories have committed to an overall average of 28% gas emissions reduction by 2020, compared to the EU target of 20%. They have also endorsed a CO2 cut of 40% by 2030.

The 6,500 cities have written over 4,600 Sustainable Energy Action Plans (SEAPs) explaining how they will reach the target.

E3G said it was vital the SEAPs were fed into the Energy Union governance framework, which is based on a system of national governments submitting reports to the Commission.

Those national plans should be required to take into account city and regional strategies and report on them, the think tank said. The framework should be backed with long-term goals and intermediate targets in law, to create a stable investment environment.

Plans for the framework have also been criticised for lacking teeth. Plans for an EU-wide energy governance system make no mention of punishment for any member state not reaching their climate and energy targets for 2030.

At this stage, there is no explicit link made by the Commission between cities and the governance of the Energy Union.

Commission guidance to member states on their national reporting, published at the same time as the Energy Union report, do mention planned regional stakeholder consultations in 2017.

But that is unlikely to satisfy local leaders and campaigners who want the role of cities and regions to be formalised in legislation.

That push is not limited to just the Energy Union. ClientEarth, an NGO of environmental lawyers, has also called on the Commission to embed the Covenant of Mayors in its revised Renewables Directive.

Markku Markkula, president of the Committee of the Regions, has also demanded that the role of cities be enshrined in the final agreement at the COP21.

>>Read: COR President: COP21 will be a failure if cities’ role not enshrined in final deal