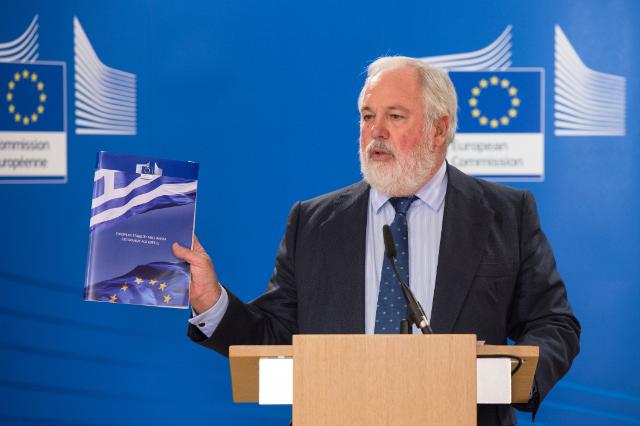 The European Union is on track to beat its target reduction in greenhouse gas emissions by 2020 but any move to increase it from 20% to 30% will only be considered if matched by developed countries at the UN Climate Change Conference in Paris.

Climate Commissioner Miguel Cañete today (20 October) in Brussels launched a report by the European Environment Agency (EEA). It predicted that if no additional measures were taken, the EU would beat its 2020 goal, slashing emissions by 24%. That figure would jump to 25% with the implementation of planned policy measures in member states.

But the report warned that Belgium, Ireland, Luxembourg and Austria would miss the 2020 target.

Transport was the only sector which had increased its emissions, by 19%, over the 1990 to 2013 period.  The European Commission is considering how best to move towards the sector’s decarbonisation.

“This is a very good signal ahead of the Paris Climate Conference,” Cañete told reporters. “Greenhouse gas emissions have fallen every year in the last decade […] our policies work.”

EEA director Hans Bruyninckx told reporters the EU would reach a 27% reduction by 2030, if it took no further action. Additional measures could increase that to 30%, although the calculation did not take into account the upcoming reform of the EU’s carbon emissions trading market.

Bruyninckx added that the bloc was also on target to make it 2020 targets for increasing energy efficiency and the share of renewables in the energy market to 20%.

The 40% gas commitment is the cornerstone of the bloc’s negotiating position at the UN Climate Change Conference, which aims to secure a worldwide agreement to cap global warming to two degrees above pre-industrial levels.

EU leaders agreed to add “at least” to the deal so they could revise up the target in the future. Diplomats are currently meeting in Bonn for the last round of talks before the COP21 begins on 30 November.

Cañete told reporters that the fact the EU was beating its targets would not mean the 2020 target would be revised upwards to 30%.

He said, “We have to have very clear that in order to raise the level of ambition [of the 2020 target] we will need a political decision by EU heads of state and government”.

The 2020 compromise to raise the target was dependent on other developed countries agreeing to comparable greenhouse gas emissions reductions in Paris, he said.

“That’s a stream that has to be confirmed before any decision is taken by the heads of state and government,” he added.

Cañete also pointed out that any post-2020 emission cuts would be more difficult to achieve than the 2020 goals.

Much of the low hanging fruit will have been picked and international credits to hike the targets would no longer be available.

Much more to do

Cañete said that countries had submitted Intended Nationally Determined Contributions (INDCs) before COP21. INDCs detail how far countries are prepared to go in the fight against climate change.

INDCs submitted so far would only cap global warming at three degrees above pre-industrial levels, he said.

The COP21 must deliver a long-term goal, a system of regular global stock-takes and a robust system of transparency and accountability. The framework should involve countries reporting every five years and raising their level of ambition over time, he said.

But he signalled that legally binding overarching target may not be possible. Such a deal would require US President Barack Obama to submit the pact to a hostile congress.

“We would like to have a binding agreement,” he said, “but the UN needs unanimity […] we cannot make the mistake we made in Kyoto.”

The Kyoto Protocol is an internationally binding agreement that committed countries to emissions reductions targets.

In Kyoto, there were only 35 countries and all the big emitters were outside [the agreement],” Cañete said. Kyoto only covered 13% of global emissions, while the non-binding “bottom up” approach of the INDCs covered 90%.

But, he added, there would be many binding elements to the finalised deal, including the accounting and stock-taking rule.

Wendel Trio, director of Climate Action Network Europe said, "We welcome the fact that the EU is overachieving its emission reduction target for 2020 already now. We encourage the EU to keep this pace of reducing emissions in the run up to 2020, as climate science clearly shows that global emissions need to be drastically cut in the next five to ten years.

"If the EU wants to be a true leader in the Paris climate negotiations, it cannot use these additional reductions before 2020 as an excuse to lower its efforts after 2020. There is a real risk that the current additional reductions will be transferred from before to after 2020 and thus will end up being additional emission permits for the period 2021 to 2030. This would result in increasing the amount of emissions under the EU’s pledge for the Paris climate agreement.

"CAN Europe believes that a true European leadership in the run up to the Paris climate summit requires the EU to cancel all unused emissions permits in 2020 under the proposed reform of the Emissions Trading Scheme. This way the EU will both contribute to closing the pre-2020 and post-2020 gaps between pledged emission reduction and what is needed to keep the warming well below 2 degrees.”

Louisa Casson, of E3G, said, "The EEA report shows that decarbonisation delivers widespread prosperity for Europe’s citizens and businesses. The success of Europe’s transition to a modern, zero carbon economy so far discredits scaremongering about climate action and competitiveness, and should boost European discussions on raising climate ambition to protect its citizens’ best interests. The news that the EU is on track to significantly overachieve its 2020 climate target means Europe can afford to move beyond its cautious offer for 2030, which doesn’t factor in this higher starting point. "

"The launch of this report during the final week of climate negotiations before Paris should boost the EU’s confidence to shape a strong deal that accelerates global decarbonisation.  In a world of increasing climate risk, the EU should stand for reality-based targets and bold leadership; not cautious targets that underestimate our capacity to deliver widespread benefits for citizens."

Nils Borg, executive director at the European Council for an Energy Efficient Economy said, “This report reinforces our assumption that the EU could go for more ambitious targets on emission reductions and energy efficiency. Particularly on efficiency, a review of the Commission’s modelling scenarios, reflecting the reality in Europe’s member states, would make efficiency technologies more attractive for investors. This in turn would enable the EU to increase its 2030 efficiency target, making it a true leader in the field.”