By Claire Stam reporting from Katowice and Frédéric Simon | EURACTIV.com

The aim is to take stock of countries’ collective efforts to limit the rise in global temperatures to “well below 2°C” and ramp up ambition to reach the objectives of the Paris Agreement.

“The Talanoa Dialogue is where the bigger problem is,” said Bas Eickhout, an EU lawmaker who is one of the two Green co-candidates for the European elections next year.

“There is a gap between what we are pledging and meeting the 2°C target, let alone 1.5°C,” Eickhout said as the UN talks enter a decisive stage this week.

“On this, Europe is not ready and this is going to be a key question during the second week of the negotiations,” he pointed out. “The player that could be in the lead during these negotiations is stuck,” the Dutch MEP told EURACTIV in Katowice.

Miguel Arias Cañete, the EU’s Climate Action and Energy Commissioner, arrived in Katowice saying the European Union was showing leadership after the EU executive published its 2050 strategy on climate change in late November.

The EU received praise for its long-term climate strategy, which lists eight pathways for Europe, including two where the EU reaches net-zero emissions by 2050.

But Eickhout drew a distinction between ongoing negotiations on the Paris rulebook and the political dimension of the Talanoa Dialogue, which is all about ramping up ambition to limit the rise in global temperatures to “well below 2°C”.

“What I see during these negotiations, is that everyone is eager to talk about the rulebook and trying to make it the issue of the week so as to get away from the ambition debate,” he said.

The Dutch lawmaker said Cañete’s insisting on the rulebook, which is indeed important to establish the technical rules of the Paris Agreement was “a cheap trick”.

“With focusing on ‘ambition’ for the rule book, the EU Commissioner tries to avert attention from the total lack of ambition when it comes to the most important part of this COP: concrete commitment to stricter climate targets to fulfil the Paris Agreement and limit the global warming to well below 1.5 degrees,” he said.

For Eickhout, the real political question is whether the European Union is ready to raise its level of ambition at the Talanoa Dialogue.

And the political signals coming from Europe are currently negative, he said. Indeed, key EU member states such as France, Germany and the UK are currently grappling with domestic issues, which hinders the political momentum required to raise the EU’s ambition at the talks.

“You have the UK and Brexit, Italy and the budget, France and the Gilets Jaunes, Germany and its government,” the MEP pointed out. “You have quite a number of key players in the EU who don’t seem to be ready for taking on further promises and certainly the Polish presidency is not going to push for it either,” he said.

Still, the COP24 is about more than just the Paris rulebook, Eickhout said, urging EU negotiators to go beyond the technical nitty-gritty to tackle the bigger political discussion of the Talanoa Dialogue.

To be fair, the EU is already aiming higher than its Paris pledge. The bloc adopted new legislation this year that will “de facto” raise its emissions reduction target from 40% by 2030 to 45%, based on 1990 levels. And when the Commission presented its mid-century strategy last month, it made clear that the 45% target was the baseline it chose for its projections to 2050.

But the Dutch lawmaker drew attention to the gap between the pledges currently on the table and the 1.5°C report published by the Intergovernmental Panel on Climate Change (IPCC) in October.

He also pointed to the “serious political drawback” which took place over the weekend when the United States, Russia, Kuwait and Saudi-Arabia vetoed a proposed text to “welcome” the landmark IPCC 1.5°C report, preferring to take “note” of it instead.

Although the move shocked many representatives in Katowice, “it should not be made too big” Eickhout said, because the very same countries also accepted the IPCC report when it was adopted in October.

Still, “the fact that they don’t want to welcome the report shows clearly where the US stands and that is in the fossil fuel coalition,” the MEP said.

Commenting on the expected outcome of the COP24, Eickhout said he expects some political play and drama at the end of the week.

“There will be a deal and it will certainly come on Saturday morning. The question is: will this be sufficient? I expect it to be a mixed bag of compromises,” he said. 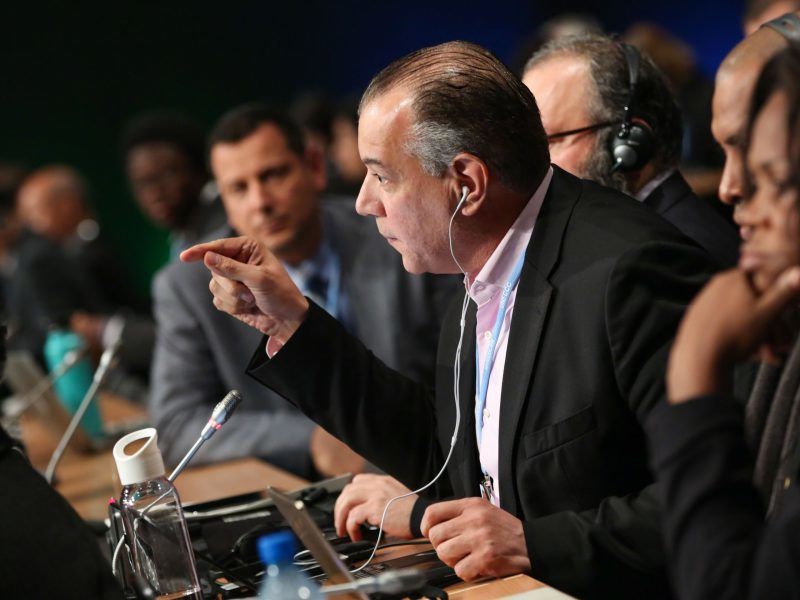 Over this special series on COP24, EURACTIV gives you a glimpse into the goings on of the UN climate conference in Katowice and what is driving the conversation there. In this edition: An update on the negotiations, postponing climate ambition, 415 institutional investors, a climate damages tax, and more.