19 of the EU's 28 members backed the deal. [Petr Štefek/Wikipedia]

The European Parliament’s Environment Committee has called for the withdrawal of 1.7 billion carbon quotas in 2019. This proposal must be negotiated in the Council before being adopted. EURACTIV France reports.

The two main parties in the European Parliament, the European People’s Party (EPP) and the Party of European Socialists (PES), reached an agreement on Tuesday 24 February that could lead to an elusive consensus on the carbon market. The committee’s proposal to remove 1.7 billion quotas from the market will likely be implemented sooner than planned, in 2019 rather than 2021. But some hoped for a date in 2018, and feel the approach is too timid for the scale of the problem. The tonnage price of CO2 fell after the vote, which came one day after the price had climbed by 5%.

The method and timetable for the withdrawal of quotas from the market formed the main subject of the debate. The Parliamentary Committee had proposed to remove the quotas in 2021, and the Council then decided they should be reinjected into the system in the future.

The result was a strange compromise: under the current proposal, the quotas would be withdrawn on 1 January 2019 although the EU ETS does not follow the calendar year (quotas are handed out on 1 April, and companies have until 1 May the following year to comply). The quotas removed from the market in 2019 would then not be reintroduced into the system. This, it is hoped, would force up the price of CO2 emissions.

Platts predicts that the tonnage price of CO2 will increase by €17 in the long term if this more ambitious position is adopted. According to eReuters, the price of a ton of CO2 will reach €20 by 2022. 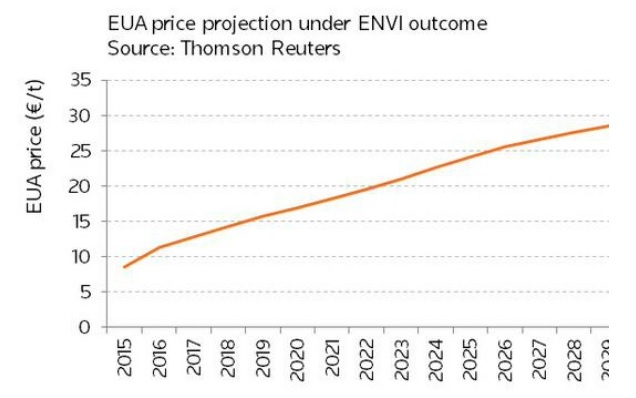 MEPs have called for new solutions to the problem of “carbon leakage”, where certain industries take their activity elsewhere because of the EU’s constraints on CO2 emissions. Until now, the solution has been to hand out free quotas to these sectors.

Nine member states released a joint declaration on Monday, in which they called for ambitious reform to the carbon market. “By 2021, the level of surplus in the EU ETS is likely to be significantly higher according to market analysts, with the resulting risk that critical low carbon investments needed this decade, are further postponed into the future, increasing decarbonisation costs and further undermining confidence in the system.”

The vote by the Environment Committee reveals the MEPs’ determination to patch up the ailing carbon market, despite the difficulties they face.

The Environment Committee has also given the rapporteur a mandate to negotiate the text directly with the Council, rather than taking it to the plenary, in order to strengthen their position. The European Parliament is still quite divided on the question of carbon restrictions, and the text would risk being diluted in the plenary.

In early February, the ITRE Committee failed to adopt a position on the subject. The Germans voted with the Greens in favour of an ambitious position, while the EPP group largely voted against strong restrictions on carbon emissions.

But the European Parliament will not have the final say on the matter, and several eastern member states may refuse the proposal in its current form.

Among the Parliament’s positive new ideas for improving the carbon market, MEPs want to see half the revenue from the carbon quotas sold at auction to be used for projects to tackle climate change.

While Tuesday’s vote was perhaps not as ambitious as it could have been, it does open up the possibility of new reforms after 2020. The Commission plans to address the unsatisfactory long-term governance of the carbon market once the question of the stability reserve has been answered.

“The environment committee has sent a strong signal to the council by substantially improving the commission proposal,” said Gerben-Jan Gerbrandy, ENVI spokesman for the Liberal ALDE group. “The ETS should start working again to facilitate the transition to a low-carbon economy.” “ALDE would have preferred the creation of a stability reserve in 2017, but a broad support for the current compromise has reinforced the position of the Parliament”.

“The price of a ton of carbon has stagnated at around €5. It should be at least €25-30 to benefit companies that prefer to invest in reducing their CO2 emissions rather than pay for the right to pollute. By pushing the creation of a market stability reserve back to 2019, the grand coalition continues to force down the price of carbon,” said Michèle Rivasi, a Green MEP.

“Anything that ups our costs relative to global competitors is another blow that we cannot afford. We want to stay in Europe. We want to grow in Europe. But for that we will need more than carbon leakage protection beyond 2020,” said Hubert Mandery, CEFIC Director General.

Carbon leakage refers to the risk of industries moving their production outside of Europe, where climate protection laws are weaker, easing the pressure on costs for heavy industries.

CEFIC did however welcome the Parliament’s call for carbon leakage protection for the best performing energy-intensive installations. But it said it remains concerned that “the Commission shows no signs of addressing the pressing need to review the fundamental structure of the ETS”.

Christoph Schott, Senior Campaigner at environmental pressure group Avaaz, said:  "The Emissions Trading Scheme has been gripped for years, but today the Environmental Committee took a wrench and started to repair Europe's most important climate mechanism. Now the EU ministers need to finish the job, further tightening the screws to ensure we increase the price to 40 euros per ton of CO2 to make coal unattractive - and climate-friendly technology sexy."

The European Union Emissions Trading System (EU ETS) was inaugurated on 1 January 2005, in order to help achieve the Kyoto Protocol objective of reducing greenhouse gas emissions by 8% by 2012. It sets emissions limits for energy-intensive industries like steel, cement and electricity generation.

The EU ETS allows member states to distribute CO2 emissions quotas to authorised industries. These industries can then exchange the quotas amongst themselves, on the condition that they respect their own national emissions limit.

The revised directive, adopted under the 2008 climate and energy legislative package, changed the ETS from a system of free allocations to an auction in 2013.

Certain exceptions were made for high-energy industries with strong international competition, such as steel. Increased costs in Europe could lead to the sector leaving the continent altogether.