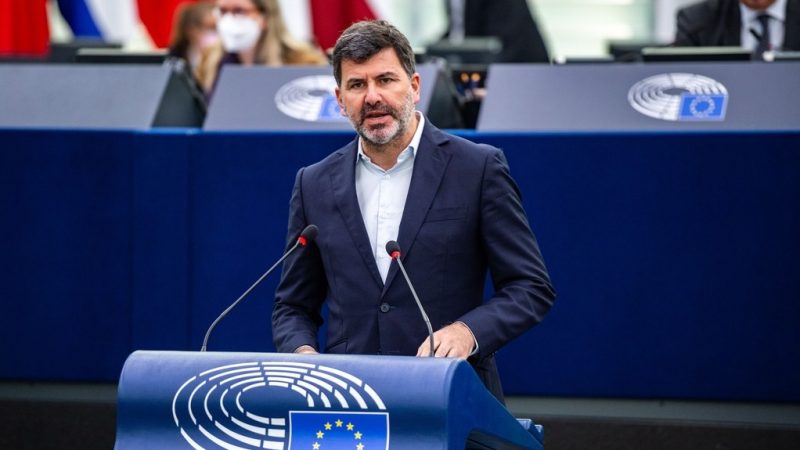 Europe’s new climate legislation needs to help citizens transition to renewable energy while protecting them from price shocks caused by volatile fossil fuel prices, according to Nicolás González Casares, a Spanish lawmaker for the Socialists and Democrats.

“Protecting citizens is the objective of the work we are carrying out with the implementation of the EU Green Deal and with the Fit for 55 package,” said Casares at an event run by EURACTIV.

“We should focus on implementing the package in an ambitious and equitable way with the social dimension, of course, along with energy efficiency, decarbonising the energy system through sustainable renewable energies,” he added.

Europe is undergoing a huge overhaul of its energy and environment legislation as policymakers try to put the 27 EU countries on track to meet their climate ambition.

The most recent legislative push – the so-called ‘Fit for 55’ package tabled in July – saw increased targets for renewable energy and energy efficiency as well as increased protection for vulnerable citizens.

Just months later, Europe saw how necessary those measures were as high energy prices hit consumers, raising concerns that the most vulnerable households would be pushed further into poverty and social exclusion.

The Fit for 55 legislation puts citizens at the centre of the energy transition, including through measures to protect the vulnerable households, said Adela Tesarova, head of the European Commission’s unit for consumers and just transition at its energy department.

The ongoing energy crisis highlights the need for citizens to turn into “active consumers” who look for ways of reducing their energy bill by better insulating their homes and switching to greener options like electric heat pumps or solar panels, she explained.

But even if consumers do look for those, they may struggle to find advice on the best solution for them, or finding someone to install it, according to Jaume Loffredo, energy policy officer at BEUC, the European Consumer Organisation.

To tackle this, EU countries need to lift administrative barriers that prevent consumers from installing renewable energy, which requires the full implementation of existing EU legislation, he said.

In the long run, building up Europe’s renewable energy capacity would also protect consumers from price hikes because it would increase the amount of cheap, locally-produced energy and reduce the EU’s reliance on foreign imports.

The Fit for 55 package includes a target to increase renewable energy capacity to 40% of Europe’s energy mix – around double today’s level.

But, while Europe is making good progress on building up its renewable capacity, there are still barriers that mean it is at a disadvantage, said Casares.

“Electricity must be competitive. However, the current wholesale markets that we see these weeks, are not helping to promote the necessary notification,” he said.

This echoes calls from countries like France and Spain to decouple electricity prices from gas prices. The argument is that volatile gas prices are pushing up the cost of clean energy, but so far, there has been little movement from the EU executive to address this.

Another barrier to building up renewable energy capacity is that some companies, like those in Spain, have been hit by taxes meant to alleviate the energy price spike, leaving them with less money to invest in renewables, said Julio Castro, Chief Executive Officer of Iberdrola Renovables Energía.

Energy ministers will meet this week to discuss the ongoing energy crisis and progress on the revisions to the renewable energy directive and energy efficiency directive.

> Watch the full event below: