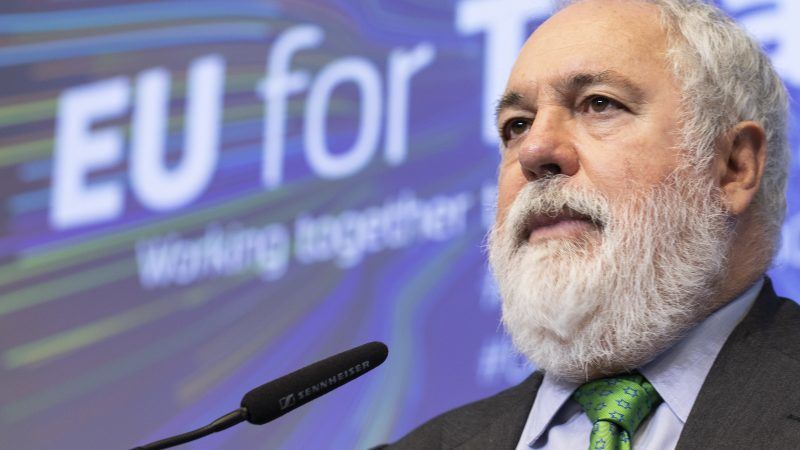 New legislation rubber-stamped by the European Parliament’s energy committee on Tuesday (10 July) means that the Commission must put together a mid-century climate plan by next year. Berlaymont officials are targeting the COP24 summit in December as a potential launch-pad for the draft strategy.

In order to meet the Paris Agreement’s goals by 2050, the EU will have to tackle emissions from sectors like transport, agriculture and shipping, and ensure that efforts to increase renewables and energy efficiency stay on the right track.

During a kick-off event for the public consultation on Tuesday, EU climate chief Miguel Arias Cañete confirmed that the EU executive will look into “multiple pathways” and that the strategy will not be a legal act but a series of milestones.

But there are widespread concerns that the way in which the Commission calculates the costs of the energy transition is not telling the whole story.

The Commission has relied heavily on the so-called PRIMES model to produce much of its recent energy legislation but at the strategy’s kick-off event, President of the European Alliance to Save Energy Monica Frassoni insisted that it is “unable to capture the full potential of energy efficiency”.

She added that PRIMES is flawed because it overestimates the costs of introducing increased efficiency measures. One of the reasons behind this is that it uses a so-called discount rate that is much higher than the member state average.

That rate is meant to address social and economic barriers, like installation and maintenance costs, which will inevitably be accrued by consumers. But the Commission uses a 10% rate, which is in stark contrast to the 5.7% EU average and the UK’s 3.3% rate.

In May, the EU executive produced a fresh analysis of energy efficiency targets, using the EU average rate. The new numbers showed that a 40% target for 2030 would cost the same as a 27% benchmark, calculated using the old 10% rate.

Although that evidence pointed towards higher ambition for the same investment, national capitals remained fairly rigid and ultimately signed up to an agreement based around a 32.5% target instead.

It is unclear at this stage whether the Commission will update the discount rate it uses but sources told EURACTIV that the EU executive plans to discuss the issue at a meeting of the Energy Economists expert group.

ROCKWOOL International advisor Brook Riley told EURACTIV that “the Commission is getting better at taking into account the socio-economic benefits of climate action” but warned the institution is “still not properly evaluating the costs of inaction and is overpricing energy efficiency investments”.

Although the EU institutions just brokered final deals on three energy laws for 2030, the agreements come with upward review clauses that will trigger in 2023, meaning a case can still be made for higher targets.

Flooding, droughts and heatwaves can entail massive costs related to property damage, clean-up and loss of working hours, among other factors, but the Commission’s current methodology does not take climate damages into account.

That is despite the 2011 mid-century climate roadmap suggesting that “further modelling improvements could consider better representation of the impacts of climate change itself”.

Commission experts are uneasy about including the costs of not adapting to climate change into models and cite the inexact nature of the practice as the reason not to. However, energy system costs are calculated by predicting fuel prices, which can also be an inaccurate science.

But data for climate costs is available: Eurostat calculated in 2015 that climate change deprives the EU of around €12 billion per year and that 86% of monetary losses incurred by member states between 1980 and 2015 were climate-related.

Those losses were calculated with 1 degrees Celsius of warming only. The European Environmental Agency also looked into what 2 degrees and 3 degrees could cost the EU and estimated losses of €120bn and €190bn, respectively.

The International Panel on Climate Change (IPCC) is due to release its final report on the effects of global warming in October. A first draft has already revealed that the difference between 1.5 degrees and 2 degrees may be more significant than first thought.

Local authorities from across the world have also been doing their homework; in 2016, the Regional Plan Association looked into how rising sea levels would affect business in New York. Analysis showed that the three busiest airports could be put out of commission.

Insurance companies are also a dab hand at evaluating the risk of climate change and putting a monetary value on the damages.

Brian Vad Mathiesen, a professor at Aalborg University, told EURACTIV that he hopes the Commission “comes out with a large number of scenarios to show how we can reach full decarbonisation”.

He urged the Commission not to lose sight of the modelling process’s objective and to create scenarios that include 100% electrification and renewable energy systems.

The Danish academic added that it is “extremely important” to democratise the energy transition debate. The public consultation on the 2050 strategy will run through the summer and the Commission aims to adopt a draft effort in November.