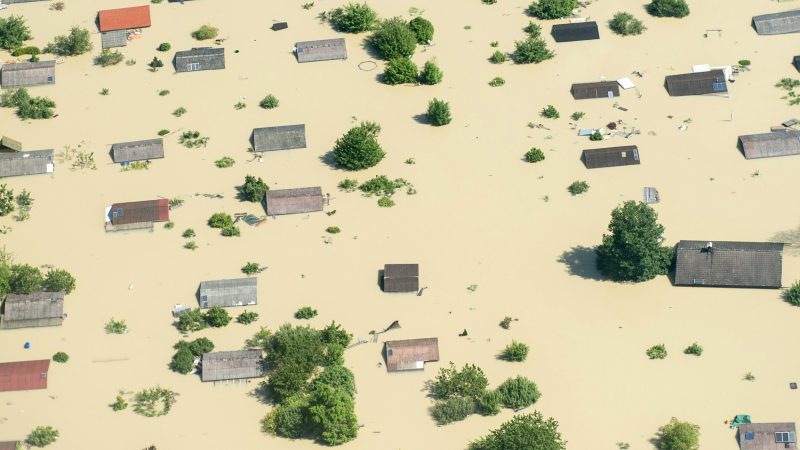 An aerial view showing roofs sticking out of the flood after a dam broke near Deggendorf, Germany, 5 June 2013. [Photo: EPA/ARMIN WEIGEL]

According to data published by the European Environment Agency (EEA) on Tuesday (2 April), the 33 European Economic Area countries have experienced a collective loss of €13 billion a year since the turn of the decade.

Germany, Italy, France and the United Kingdom topped the list of the countries most hard-hit by the damages. France recorded the highest number of fatalities, with 23,415 lives lost since 1980.

A massive 68% of those deaths were caused by what the Agency classes as ‘Climatological – Heatwave events’, while 22% were triggered by ‘Geophysical events’ like earthquakes and landslides.

Nearly a third of total economic losses were caused by flood damage and another third were caused purely by storms. The most expensive single events were 2002’s Central Europe flood (€21 billion) and the 2003 drought and heatwave (€15 billion).

According to German reinsurance group Munich Re, 2017 was globally the second-costliest year on record for natural disasters, after 2011, with losses from weather-related disasters breaking previous records.

Munich Re estimates that total losses topped $330 billion (€293 billion) and that insured losses came in at $135 billion, making it a record-breaking year in the 1980-2017 period. The group concluded that hurricanes and earthquakes were the two most prominent causes.

2017 only narrowly came up short of the 2011 record of $350 billion, largely caused by Japan’s devastating earthquake, the fourth most powerful since records began, which triggered the Fukushima nuclear meltdown.

Although climate and weather-related losses are clearly significant both from a loss of human life and a financial standpoint, policymakers are reluctant to include them when coming up with new rules and targets.

For example, the European Commission’s recent Clean Planet for All climate strategy for 2050 acknowledges that record temperatures and weather events “impose ever-growing  costs and threaten the livelihood of all of us”.

However, the modelling does not take into account those specific losses and even the EEA says that “the high variability makes the analysis of historical trends difficult, since the choice of years heavily influences the trend outcomes”.

The Agency also maintains that it is a complex factor to interpret given that “a large share of the total deflated losses has been caused by a small number of events. Specifically, more than 70 % of economic losses were caused by less than 3 % of all unique registered events.”

Economic losses in terms of agriculture are also difficult to predict. Sectors like the wine-growing and beer-making industries are expected to be hit hard by temperatures but the true impact simply cannot be summed up in one concrete figure.

Environmental groups have for some time been calling on policymakers to find a way of including the figures but faced with opposition have instead focused on making sure that target setting exercises champion the so-called co-benefits of addressing climate change.

The Commission’s draft 2050 climate plan was widely welcomed in that regard as it concluded that an ambitious climate change policy would cut healthcare costs by around €200 billion per year, reduce premature deaths and massively improve air quality.