The representatives of Fridays for Future Germany: Jakob Blasel, Franziska Wessel and Luisa Neubauer together with Greta Thunberg during the award ceremony of German film and television award ‘Goldene Kamera’. [Felipe Trueba/ epa]

The climate activists at Fridays for Future Germany say they have no leadership. But the same faces keep appearing in German newspapers and the media is already reporting on first internal tensions. How is the student movement coping with this media attention? EURACTIV Germany reports.

This week, German newspapers Der Tagesspiegel and Die Welt reported on growing resentment within the German branch of Fridays for Future climate movement: Some members would complain about the personality cult of Luisa Neubauer, considered the initiator and most recognisable face of the movement in Germany.

Neubauer and five other members supposedly decided on issues without discussing them with other members. “we no longer have grassroots democracy,” it was reported in an internal online chat quoted by the Tagesspiegel.

The claim that there is an internal revolt is absurd, said Sebastien Grieme, a member of Fridays For Future Germany. “I don’t understand that it was written this way, it’s just wrong,” he told EURACTIV.

The 19-year-old, who has just started his physics studies in Potsdam, said there is no “leadership” around the five people mentioned. “We make most of our decisions democratically. As a rule, everything goes to our local groups, unless things need to be done very fast. But I think many organisations can learn something from us when it comes to democracy.”

In an interview with EURACTIV, Luisa Neubauer also stressed that there is no hierarchy within the movement in Germany. “There should be a distinction between representation and decision-making within the movement. When we make decisions, we try to let as many people as possible participate and vote on a democratic basis. We have an incredible amount of ‘feedback loops’ that even reach the local groups.”

Grieme joined the movement in December. As a member of the working group focusing on making requests to politicians, he was one of the four Fridays For Future Germany representatives, who presented their manifesto with requests in Berlin at the beginning of April.

Grieme is aware that only a few of his fellow campaigners are regularly questioned by journalists. “We have a bunch of amazing people who are not very present in the media. That’s why we are working towards ensuring they too can share their knowledge and stories in public.” This is important because Fridays for Future is a very diverse group, Grieme said.

Wessel has already appeared on several German news networks, such as Phoenix, Deutschlandfunk and the NDR talk show, where she was together with other Fridays For Future leader Jakob Blasel.

According to Grieme, the large national media networks are the ones concentrating on just a few people. “Things are much better” at a regional level, he said. That’s why the movement is currently working on a press concept to distribute various journalist inquiries to contact persons across Germany so that the media is less focused on just a few figureheads.

Holger Michel knows how media organisations work. He experienced them first hand when he unexpectedly became the face of Berlin’s refugee helpers in 2015. “This is a snowball effect – one media outlet interviews you and your name is already taken up by other media organisations.”

Michel owns a communications agency and supports the Fridays for Future movement with media enquiries and expertise. He says he helps the movement in a personal capacity but insists he is not involved in the movement’s activities. “Neither I personally nor the agency receives money or any other monetary service”.

He says media claims that Neubauer wants to draw the attention to herself are completely unfounded. “It is not true that she does not want to give anything,” he refuted, saying Neubauer would undoubtedly redirect media questions to other members of the movement when needed.

“None of us know how to form a movement”

Fridays for Future also stated that they were independent of political parties and not bound to any other organisation. Nevertheless, within a few months only, the movement generated an amazingly professional structure of local chapters, delegates and working groups who organised their own demonstrations, websites and finances.

Agency owner Michel was impressed: “I know how the conspiracy theory goes: the little ones of Fridays For Future could not possibly be that good and spin doctors and agencies are probably behind them.”

“All I can say is that they are impressive. Old people like me only help with the organisation.” 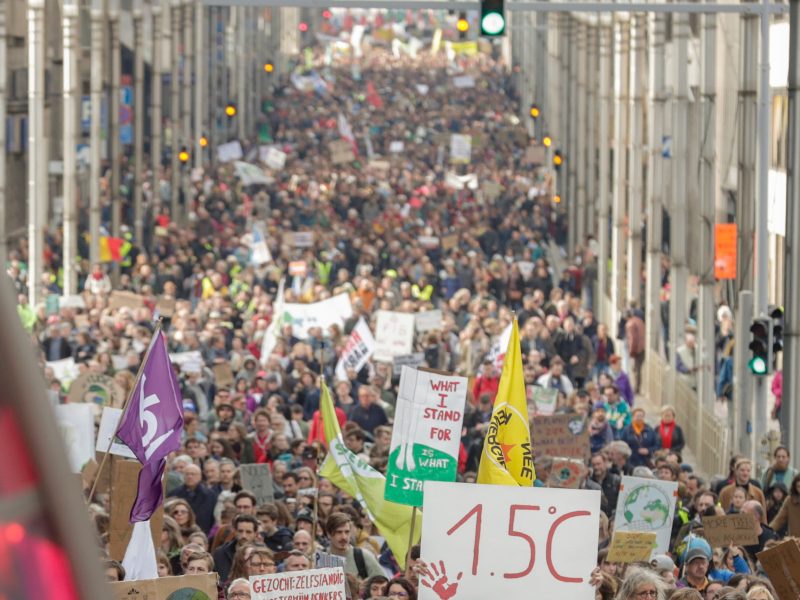 Of course, the movement still runs into difficulties, said Luisa Neubauer. “None of us knows how to form and organise a movement. But we have already learned a lot.”

“Experience is also taken from our own ranks,” according to Sebastian Grieme, who mentioned that a few also assisted the movement with their prior knowledge.

However, it requires an enormous amount of time. “Some put their whole lives into it. At the moment, I can barely do anything else, one has to make sacrifices,” he says.

Nevertheless, Grieme is convinced that his fellow campaigners are guided by their deepest convictions. “It is not about some people wanting media attention or hoping to gain an interesting position, but simply about changing the German government’s climate policy.”

More fundamentally, Grieme says the focus on Neubauer and a few others of the movement is not a major problem per se. “What disturbs us is the eternal debate about truancy. Substantive discussions are being avoided that way.”