G7: What was (and wasn’t) agreed by world leaders to combat the climate crisis 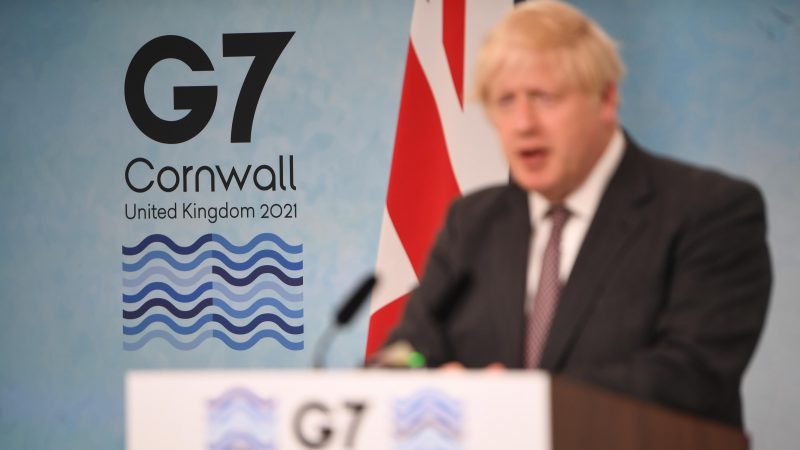 The dust is settling on the G7 Summit, which saw world leaders meet at Carbis Bay, Cornwall, to discuss the delivery of a strong economic recovery from the COVID-19 pandemic and responses to the climate crisis.

Against a backdrop of sandy beaches and hundreds of climate activists demanding action, the G7 released a final communique on Sunday (13 June). Efforts to combat the climate crisis feature heavily in the official document, but green groups and activists have been left disappointed at the lack of detail in plans to promote a green industrial revolution. Read the reaction here.

From “green Marshall Plans” to net-zero energy sectors and a lack of clarity on green spending and transport decarbonisation, edie rounds up what was and wasn’t agreed at the G7 Summit.

On energy generation, a commitment to set net-zero targets in the 2030s, first flagged last month, is formalised. Supporting these targets is a commitment to end direct government support for new thermal coal generation capacity without co-located carbon capture and storage (CCS) technologies by the end of this year. All other “inefficient” fossil fuel subsidies will be phased out by 2025.

While several G7 nations, including the UK, have already pledged to end coal generation before 2030, the pledge is particularly significant for Japan. Coal accounted for 31% of Japan’s electricity generation in the 2019-20 financial year and it is believed to be the world’s second-largest coal supporter, behind only China.

There is also a commitment to stop direct funding for coal-fired power stations in OECD nations by the end of 2021. G7 members will encourage other nations to follow suit on coal.

The UK has been continuously criticised for failing to publish a detailed roadmap outlining exactly how the nation plans to reach net-zero emissions by mid-century. A dedicated strategy is expected to be published prior to the COP26 climate summit in Glasgow this November, and the G7 has also committed to publishing strategies outlining how efforts to deliver a global transition to net-zero will be reached.

Crucially, the G7 has hinted that they will publish these documents before COP26.

“We commit to submitting long-term strategies that set out concrete pathways to net-zero greenhouse emissions by 2050 as soon as possible, making utmost efforts to do so by COP26,” the communique states.

Currently, more than two-thirds of global GDP are covered by intended or submitted net-zero targets. The emphasis is now on national governments to outline what mechanisms will be prioritised in order to meet said targets. Doing so prior to COP26 will help streamline negotiations at the summit, with nations able to outline which solutions can be championed as part of new green markets.

The Environmental Audit Committee (EAC) looks set to publish a report outline how spending can protect and improve biodiversity and eco-systems. Indeed, the world is on track for a sixth mass extinction and many nations, including the UK, have failed to deliver their nature targets time and again.

A particularly damning study found that human activity has affected 97% of the world’s ecosystems. According to the World Economic Forum (WEF), $44trn – more than half of global GDP – is exposed to risks from nature loss. Similar research from WWF found that nature loss will cost the global economy at least £8trn by 2050 without transformational action from the public and private sectors, alongside governments.

It is a welcome sign that the G7 noted the importance of linking discussions set to take place at COP26 with the themes and findings of the impending Convention on Biological Diversity (CBD) summit.

Two technical committees of the CBD have commenced meetings running through to mid-June to formalise a ‘global biodiversity framework’ that would be adopted by governments across the globe, akin to the Paris Agreement aimed at combating global average temperature rise.

Indeed, the G7 has formally agreed to a shared G7 Nature Compact. The Compat ties into key biodiversity-related works, including CBD discussions and the Dasgupta Review. It notably commits nations to supporting the target to conserve or protect at least 30% of global land and at least 30% of the global ocean by the end of the decade.

The G7 has also committed to “strengthen their deployment and implementation” of nature-based solutions (NbS), recognising that they can deliver “significant multiple benefits for climate mitigation and adaptation, biodiversity, and people and thereby contributing to the achievement of various Sustainable Development Goals (SDGs)”.

However, the G7 states that these solutions should not replace the “necessity for urgent decarbonisation and reduction of emissions”.

Additionally, the G7 reaffirmed a commitment to the New York Declaration on Forests to end natural forest loss and, building on the Bonn Challenge, restore 350 million hectares of forest by 2030. Reports suggest that progress against the previous 2020 deadline of the Declaration was poor, with “little evidence” that signatories to the declaration have acted in line with its commitment, meaning that achieving the 2020 goals is now “likely impossible”.

Climate finance was subject to key discussions prior to the G7 meeting last week, with finance ministers from the nations agreeing on a historic agreement that will mandate climate reporting in line with the recommendations of the global Taskforce on Climate-related Financial Disclosures (TCFD).

Some green groups were left disappointed that an ongoing agreement to provide $100bn annually in climate finance to developing nations wasn’t discussed by finance ministers. In the G7 meetings, the nations “reaffirmed” said commitment, running through to 2025.

Research suggests that G7 governments were failing to deliver on the longstanding $100bn pledge. Oxfam estimates the G7’s current commitments would deliver $36bn by 2025, of which less than $10bn would be for projects and initiatives on climate adaptation.

Going into the summit, only the UK and US agreed to increase funding from current levels. France was aiming to maintain current levels of climate finance.

During the discussions Canada announced it would double its financing to $4.4bn over the next five years, with Germany raising its contribution by €2bn to €6bn annually through to 2025.

The G7 confirmed that the financing would come from multiple sources. Ministers called upon Multilateral Development Banks (MDBs), bilateral Development Finance Institutions (DFIs), multilateral funds, public banks, and export credit agencies to “ensure that financial flows from these institutions are aligned with the goals of the Paris Agreement”.

Alongside climate change, the key theme of the G7 discussions was the COVID-19 pandemic. It has highlighted the need to create a “just” economic recovery that captures new green markets. Green groups and activists hoped that the G7 would use its considerable wealth to enshrine mechanisms to ensure all parts of society can prosper as nations rebuild economies.

That wasn’t the case. The G7 instead stated: “We are steadfastly committed to addressing barriers to accessing finance for climate and nature faced by women, marginalised people, and underrepresented groups and increasing the gender-responsiveness and inclusivity of finance”.

A reaffirmation of supporting the SDGs was also mentioned, but no specific plans were issued.

The official communique does outline the importance of tackling emissions from the global transport sector, but unlike a net-zero energy agreement, efforts to reduce transportation emissions remain more fractured.

The G7 confirmed that it would “intensify efforts in enhancing the offer of more sustainable transport modes”, including encouraging phase-out of traditional passenger vehicles in favour of electric vehicles (EVs) before 2040.

Heading into the summit, Heathrow chief executive John Holland-Kaye called on the leaders of the G7 to agree to escalating mandates for 10% sustainable aviation fuel blends by 2030, growing to at least 50% by 2050. As such, some parts of the industry have been left disappointed by the lack of official plans from the G7.

Technically, the G7 did agree on a new framework aimed at funnelling billions into green infrastructure. However, the details of this new framework are largely non-existent.

The G7 agreed on a new “Build Back Better for the World” scheme that has been likened to a climate version of America’s post-war Marshall Plan. Other reports suggest that it has been set up to rival China’s Belt and Road Initiative that has seen around $3.7trn funnelled into infrastructure globally – often without considerations of the environmental impacts.

The UK Government has claimed that details of the new initiative will be outlined prior to COP26, and that a key focus will be to boost green infrastructure deployment in developing countries.

Much like green infrastructure, a focus on green innovation was mentioned, but without concrete plans. The G7 noted the importance of the development of the circular economy, as well as electrifications and “comprehensive industrial heat utilisation”, fuel switching and carbon capture, utilisation and storage (CCUS). However, no official ringfenced funding was announced for these technologies.

It is likely that financing for low-carbon solutions will develop nation by nation, rather than through global agreements, with some markets better set up to promote certain solutions – the UK, for example, has a world-leading offshore wind market.

The G7 did welcome the second phase of Mission Innovation, which consists of the European Union and 22 other governments that cover 90% of global public investment into green energy solutions. Mission Innovation members have committed to spurring “affordable and attractive clean energy, accessible to all in this decade”.

This article was originally published on edie.net and is reproduced here with kind permission.