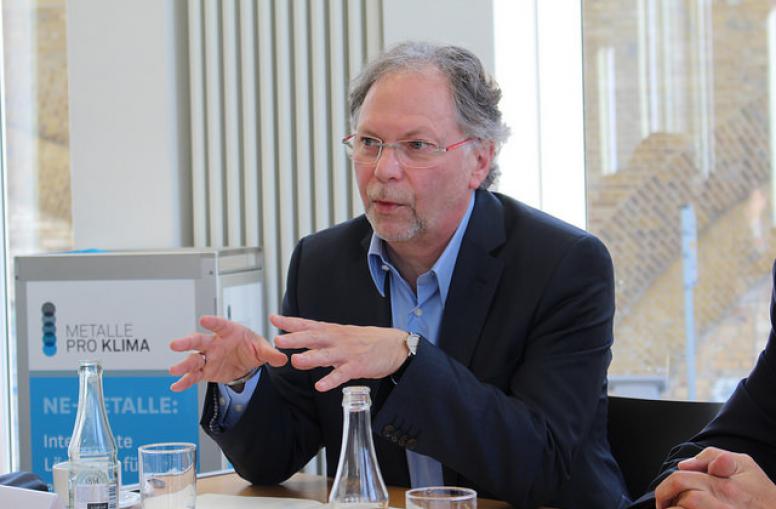 Despite the ambitious 2-degree-target set by G7 leaders, experts warn against premature elation ahead of the UN Climate Summit in Paris, saying Germany’s solo run, in particular, is a threat to Europe’s efforts to protect the climate. EURACTIV Germany reports.

With its national Energiewende campaign, Germany hopes to become a leader in global climate policy. The country’s poster child is a target to reduce CO2 emissions by 40% until 2020, compared to 1990 levels.

“That is extremely dumb climate policy,” criticised Joachim Weimann, a professor of environmental economics at the University of Magdeburg, at a EURACTIV workshop on Thursday (11 June) in Berlin.

An emissions trading system (ETS) already exists at the European level, he said, which is a cost-efficient way to reduce greenhouse gases. The government’s 40%-target, on the other hand, is accompanied by massive support for renewables, Weimann explained.

A national prevention target hinders the aim of emissions trading and is nonsensical, he argued. “It shouldn’t matter where the CO2 reductions occur, which are needed to realise the European climate targets. Carbon-dioxide reductions should only take place where they are the most cost-effective.”

All forms of renewable energy promotion, have no effect on the actual amount of CO2 reduction, Weimann said. They only drive up the cost of reduction, which is already defined by the cap set in emissions trading, the environmental economist indicated. Instead, the German government should create better framework conditions for ETS, he stated, including more research in new energy sources. The Energiewende will not be achieved with existing technologies, alone, Weimann added.

Europe must finally take ETS seriously and oppose the biased criticism of the system. “At the climate summit in Paris (COP21), Europe must campaign for a global emissions trading system,” Weimann said.

One could form centres where these systems already exist, he explained, such as in Europe. Then these emissions trading regions could gradually be expanded to include new countries for trading.

“If Europe cannot manage it, the COP21 will fail,” Weimann argued. The goals set by the G7 countries at their summit in Schloss Elmau are a “Herculean task” for industrialised countries.

Chancellor Angela Merkel recently dampened hopes for a global emissions trading system in the near future.

Expansion of trading with emissions rights beyond Europe would be “especially effective” to create “uniform global framework conditions”, she indicated, but there is not much of a chance for it.

“The question over the price of CO2 emissions, also a worldwide system, will surely be discussed theoretically but no agreement will be reached, I’m afraid,” Merkel said.

“G7 decisions are a start signal for a nuclear renaissance”

At their summit in Bavaria last Monday (8 June), the G7 heads of state and government pledged to fulfill the 2-degree target. Before the end of the century, the industrialised countries intend to reduce greenhouse gas emissions to zero. By 2050, they hope to reach greenhouse gas reductions at least in the upper 40-70% range.

The industrial sector considers the targets utopian, pointing out CO2 emissions levels during various steps of the production processes.

“In the materials industry, for example, there are process-related CO2 emissions that we cannot eliminate. A complete decarbonisation would be equivalent to a deindustrialisation,” criticised Franziska Erdle, CEO of the Metal Industry Association (WVM), which includes 660 companies in the non-ferrous metal industry.

Even if one only looks at decarbonisation of the energy industry, Erdle said, a dependence on nuclear power ends up being necessary to guarantee basic load supply.

“The decisions from Elmau are a start signal for a renaissance in nuclear energy,” she indicated.

According to the WVM director, the national 40% target is also “unrealistic”. The state invests billions in renewables with only marginal effects, Erdle argued.

“Only 85% of depreciations in energy-intensive industry are reinvested. If it continues in this way, then parts of the industry will migrate out of Germany. But we want to actively join in the Energiewende,” she emphasised.

Same rules for all?

At the climate summit in Paris the international community must agree on binding targets for all countries, Erdle said. “We need the same rules for all and no solo runs from individual states.”

But the German government is still holding fast to its 40% target. As a leader in climate policy, it hopes to convince developing and newly industrialising countries to get on board.

“It is not only about decarbonisation, but also about restructuring the production and consumption structures,” he said.

“We are trying to keep the industry in Germany. But at this point it would be wrong for companies to throw in the towel now and say we cannot manage with the climate targets at the national and European level,” explained Schafhausen.

Climate protection is necessary, he warned. “Right now we can decide whether we want to reach the 2-degree target or whether we want to accept massive damages and their costs,” Schafhausen pointed out. “Minimal losses stand in contrast to huge benefits.”

Originally coined in the 1980s, the term Energiewende describes a movement in Germany to shift to clean energy, reducing the country's dependence on gas, coal and nuclear energy.

In the wake of the Fukushima nuclear disaster 2011, the campaign was picked up by Angela Merkel.