Thunberg was in Brussels to take part in one of the climate school strikes that have taken place every week in Belgium since 2 December.

Before joining the march, the Swedish activist was invited to make a speech in front of the Economic and Social Committee (EESC), an EU consultative body representing civil society organisations.

And as usual, she didn’t mince her words.

“We know that most politicians don’t want to talk to us,” Thunberg said from the outset.

“Good. We don’t want to talk to them either,” she told a roomful of EU policymakers, which also included Jean-Claude Juncker, the President of the European Commission.

“We want them to talk to the scientists instead. Listen to them. Because we are just repeating what they are saying and have been saying for decades,” she continued.

“We want you to follow the Paris Agreement and the IPCC reports. We don’t have any other demands. Just unite behind the science – that is our demand.”

“Simply not enough time to wait for us to grow up”

The abrupt style in which the 16-year old climate activist addressed the Brussels crowd may have shocked those who are more used to gentler ways of diplomacy. But Thunberg’s down-to-earth speech definitely hit home as the room repeatedly broke into applause.

In her speech, the green activist dismissed the critics who frequently tell her to go back to school and bring the climate fight to the university benches.

“There is simply not enough time to wait for us to grow up and become the ones in charge,” she said, citing the latest report by the Intergovernmental Panel on Climate Change (IPCC) which said emissions must peak by 2020 and fall steeply afterwards in order to keep global warming below 1.5°C. “That is next year,” she said.

Thunberg also lashed out at the “conspiracies” which portray striking school children as “puppets” manipulated by outside interests. 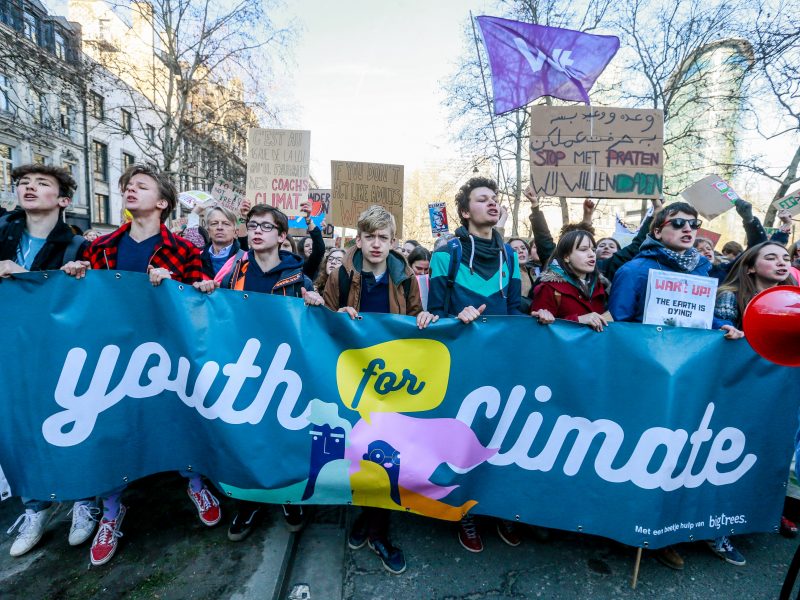 But for those who do their homework and listen to science, Thunberg pointed to a damning fact.

“According to the IPCC report, we are about 11 years away from being in a position where we set off an irreversible chain reaction beyond human control,” she said. “To avoid that, unprecedented changes have to take place within this coming decade.”

For the EU, that means drastically increasing its emissions reduction target, beyond the 40% reduction agreed for 2030, and well above the 45% currently under consideration.

“If the EU is to make its fair contribution to stay within the carbon budget for the 2°C limit, then it needs a minimum of 80% reduction by 2030. And that includes aviation and shipping. So about twice as much as the current proposal,” she said.

But getting there will require a radical overhaul of the political system currently based on political parties who compete against each another to win the next election, she said.

“That must come to an end. We must stop competing with each other. We need to cooperate, and work together to share the resources of the planet in a fair way.”

5 responses to “Greta Thunberg: ‘We just want politicians to listen to the scientists’”