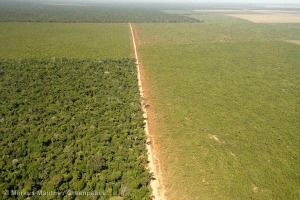 Projections that feedstock-based biofuels will indirectly cause net greenhouse gas emissions in the future have been confirmed by preliminary results from two new studies of past land use change.

If the papers’ results remain unchanged by the peer review process, they will significantly strengthen the case for bringing forward a review into whether indirect land use change (ILUC) factors should be included in EU legislation.

The two studies, due to be published in the Spring, were co-authored by the EU's Joint Research Centre (JRC), the Netherlands Environment Assessment Agency (PBL) and Koen Overmars, an independent Dutch consultancy.

“ILUC is a reality,” Luisa Marelli, the JRC’s lead alternative fuels scientist, told a European Parliament workshop on 20 February. “All of the models and studies now show that there is an ILUC impact and that this is above zero [greenhouse gas emissions].”

The ILUC acronym refers to net carbon loss that occurs when forests and grasslands are cleared for food production that has been displaced by biofuels plantations elsewhere.

EURACTIV understands that findings from the new JRC/Dutch historical studies, which cover global trends over a 10-year period, are broadly similar to those from future projection-based models, such as one conducted for the EU by the International Food Policy Research Institute (IFPRI).

That report found that nearly half of the expected carbon gains from switching to biofuels would disappear if land use change effects were considered. It was heavily criticised by agricultural and biofuels lobbyists.

“I don’t trust this [ILUC] science”, Rob Vierhout, secretary-general of the European ethanol producers association ePure, told EURACTIV last year. “It’s a crystal ball exercise. No one can give hard numbers on ILUC.”

Speaking at the European Parliament workshop last week, Raffaello Garafalo, secretary-general of the European Biodiesel Board, ploughed the same furrow. "ILUC is not a science, I'm sorry, not a positive science like Newton's gravity," he said. "ILUC has never been verified."

Such positions may soon need to be revised.

What’s in the black box?

The new JRC/Dutch study contains biofuels emissions estimates based on a transparent methodology, different from the IFPRI ‘black box’ model, which provided a repository for a raft of sometimes-opaque assumptions, on price and climate volatility, for example.

This makes it easier to verify findings, although arguably less rigorous than the IFPRI technique, which started with an economic projection of food production in 2020 and then ‘shocked’ it by introducing quantities of biofuels to the model.

“Models give different ILUC results mainly because they use different assumptions on yield and food consumption,” Marelli said. “Once these are ‘fixed’, their results are similar.”

“The knowledge of models is now advanced enough to estimate ILUC factors with the same order of uncertainties as for direct emissions,” she added.

Direct emissions from land use change have not been challenged by the agricultural and bioenergy industries, even though output of nitrous oxide, a powerful greenhouse gas, can vary by a factor of two from one end of a field to another – and by a factor of 100 from one farm to another.

The current EU proposals, discussed at an Energy Council in Brussels on Friday (22 February), mandate a review of scientific evidence for ILUC in 2017 before fuel emissions values for biofuels can be posted in EU legislation.

But with a new report by the GRAIN NGO showing that 17 million hectares of land has been lost in ‘land grabs’ for biofuels production over the last decade, fears are rife that the EU may be contributing to the problem in the interim, partly under the banner of climate mitigation.

Even so, the Energy Council heard repeated objections to the Commission’s substantive compromise on ILUC – a 5% cap on feedstock-based biofuels in the EU’s 2020 transport mix, and phase out of public subsidies for them after that.

“Poland doesn’t agree with the proposal for a 5% limit on the transport sector,” the Polish representative said, and up to half of Europe’s nations – and almost all the central and east European states – are thought to favour weakening the draft legislation.

Speaking for the EU, Energy Commissioner Günther Oettinger appeared to signal concessions in negotiations to come. “We should work to have a coherent solution taking into account the different market conditions in different member states,” he told the Council. “We therefore have to ask everyone to be flexible, and the Commission will certainly be flexible."

But campaigners may find the timing of such flexibility curious, as the EU/Dutch reports into historic land use emissions are expected to be published next month.

Similar JRC papers – such as one on the carbon debt created by bioenergy – have been repeatedly delayed due to objections about its conclusions within the European Commission’s energy directorate.

Last month, a coalition of environmental groups including the European Environment Bureau, Birdlife, and Client Earth launched a suit against the Commission demanding the report’s release.

EURACTIV filed a freedom of information request for the document seven months ago, but is, similarly, still waiting.

Indirect land use change (ILUC) refers to the unintentional changes in land-use as a result of the expansion of croplands for ethanol or biodiesel production.

The demand for other crops, which are moved to make way for biofuel production, is then met by the clearing of new land, such as forests, grasslands and wetlands, resulting in a depletion of the planet's carbon absorption stocks. This process is exacerbated when the forests are burned, and vast quantities of climate-warming emissions are pumped into the atmosphere.

The European Commission has run 15 studies on different biofuel crops, which on average conclude that over the next decade Europe's biofuels policies might have an indirect impact equal to 4.5 million hectares of land – an area the size of Denmark.

Some in the biofuels industry argue that the Commission's science is flawed and the issue could be tackled by overhauling agricultural strategy to improve productivity, or by pressing abandoned farmland back into action. Waste products from biofuels production can also be fed to animals, they say, so reducing the pressure on land resources. However EU scientists say that this factor has been accounted for in their models.